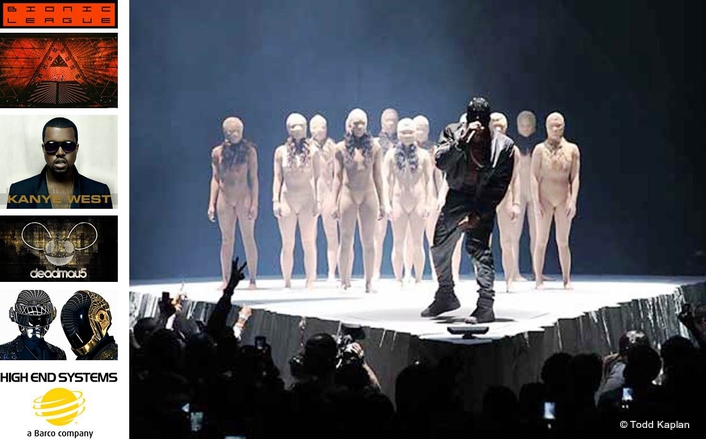 Bionic League Designer Pushes The Envelope WIth Hog 4 Control
As lighting designer for Kanye West, Deadmau5, Daft Punk and many others, Bionic League's John McGuire has had opportunity to work with every instrument and control platform on the market, but says he 'always comes home to the Hog'. For Kanye's latest tour and numerous fly dates, McGuire employs various members of the Hog control family, from a mobile Hog 4PC setup all the way to the flagship Hog 4 desk. The versatility of the range is perfect for the wide range of shows the LD tackles annually. Production Support for the tour was through VER, with the consoles and control supplied by Bionic League.

"I started out with the Hog around 1998," says McGuire. "I was working at clubs with Trackspots and Cyberlights running on LCD controllers, until I saved up enough money for a Wing and a widget, and ran the whole club on Hog PC. I continued working with different lighting companies, always using the various Hog platforms - especially Hog PC and widgets for special events. In 2003 I went on my first tour and bought my first Hog iPC. I ran that in Hog II mode for some time, and then made the transition to Hog 3. We did Daft Punk on iPC, and even into 2008 on Kanye's 'Glow In The Dark' tour we started off with iPCs but the rig was very large with a lot of DL3s and video, so we ended up moving up to Full Boars. We used the Full Boars on the Hog 3 platform, and really started getting into more MIDI, touch OSC and timecode with our clients. In speaking with the HES development team during the creation of the Hog 4, we were very keen to make sure that OSC was a strong part of the console - because it just opens up so much more control, both for ourselves and for our electronic music clients. It lets us move around the venue and get some wireless devices patched to the console."

When the Hog 4 was released, McGuire used the desk on 2013 shows with Deadmaus. "Our first shows with the Hog 4 platform were with Deadmaus last year, and I then started using them on all of Kanye's one-off's last year. We purchased our first desks for the start of this tour, and upgraded our DP8000s to the Hog 4 platform. We've had great success on this tour, and actually purchased two more consoles to start prepping and pre-viz at the office. We are very firm supporters of the software platform. It's clean, straightforward, and an easily digestible platform. You can get anything you want out of that console."

McGuire's touring lighting director Eric Gorleski is a former MA programmer with limited Hog experience before his training sessions in Austin. "I told him we're doing the show on Hog," says John, "and overall its been a great transfer. Eric comments, "I learned on the MA and am comfortable on that desk, but there's usually many different ways to do one thing, which can be daunting and even overwhelming to a programmer, especially on a show like Kanye where things regularly change on the fly. It's vital to manipulate the lights very quickly and predictably. I love the fact that the Hog is now even more customizable, and you can morph it to your familiar muscle memory to help the transition. I am always finding ways to do things faster on the desk. The syntax is different, but I'm making up that time through my custom User Kinds and other things I've set up." 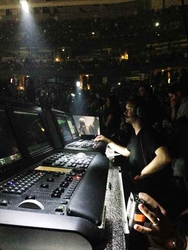 McGuire adds, "One thing that is really enjoyable about any Hog is that you can walk up to it and know where everything is located. And with a few button presses, everything can be exactly the way you want it to be. After owning 4 Hog 4's, we're now looking at getting some Hedgehogs and small remote consoles for fly dates and smaller gigs. The Hog 4 is fabulous, and the new console setups elevate the comfort level programmers that need the bigger consoles, but once you get that show in there and you have that platform, I'm a big supporter of 'let's get the show as tiny as possible'. With the new User Kinds and the Quick keys, it's brought the ability to really dial things in - not only for the programmer but also for the requirements of the show. Now, you can really see where somebody spent the time to develop their show file and make their work flow faster.

In closing, McGuire says that High End's customer service would have been great - if he had required it! "The nicest thing I can say is that we haven't needed any support. I have everybody's number and they're ready to give us anything we need, but we just haven't needed it - the consoles have been solid and the DPs have been great. Plus, Joe Finn and the guys do a great job of maintaining everything."