Kaiser Chiefs Have A Riot with Robe! 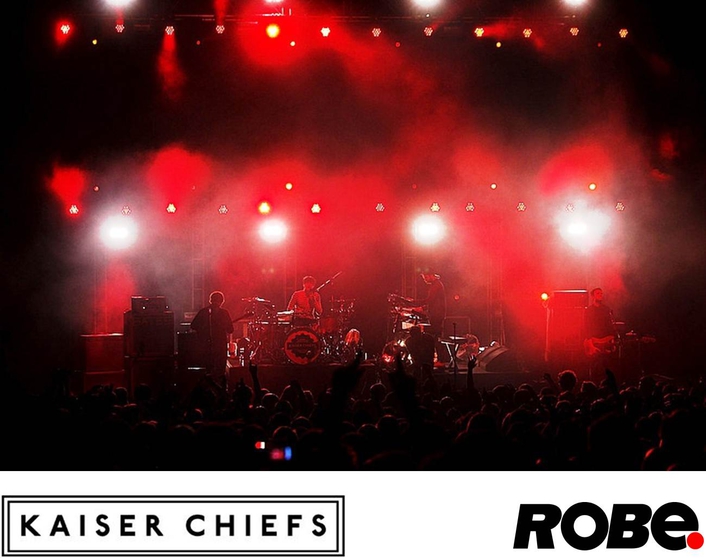 Kaiser Chief’s UK tour
UK indie rockers The Kaiser Chiefs are back on the road again and right on form being among the country’s favourite live performers, with a characteristically boisterous set and a hard-working four week sold-out UK tour just behind them.

Lighting designer Richard Larkum has worked with the band for the last seven years, since the release of their seminal debut album “Employment” in 2005, and this time he is using Robe’s ROBIN 600 LEDWash fixtures as part of a Kaiser Chiefs lighting rig for the first time.

Larkum describes the tour as “Classic old skool” in terms of the 21 dates being run almost back-to-back, taking in the more intimate atmosphere of the theatre and concert halls circuit with a few more off-beat venues. It’s been very successful and great fun.

The look and feel of the lighting for this leg was based on the slightly retro guise of 1990’s lighting rigs, and getting ‘back to basics ‘ in terms of producing lots of big beamy looks and plenty of movement, flashing and strobing to keep pace with the maelstrom of energy exuded by the band.

He also incorporated a few concepts that were ’under development’ during last summer’s festival tour, and with no video production or elaborate set for distraction, it was all down to imagination and the lighting to create a visual excitement and signature appearance.

Eight of the 16 Robe LEDWash 600s were on the front truss washing the stage area. They were so efficient nothing else was needed to flood the area and light the band from the front top angle.

The other eight were upstage on the floor and used to blast through for a powerful array of low-level back-beams. He wanted a seriously bright and diffuse lightsource for this very specific effect, and the LEDWash 600s delivered perfectly.

Larkum has used the LEDWash 600s on a few shows and tours now, the first one being The Levellers in Spring 2011 and last year he also used them on the Vaccines as well as some shows for The Prodigy in South America.

Having tried most Robe range moving lights over the last five years he comments that with the ROBIN series, “Robe has really got it right”.

He’s impressed with the intensity and the zoom, especially the large areas that can be covered when it is zoomed right out in ‘wide’ mode. He thinks the colours are great and the colour mixing smooth and streamlined.

He also likes the strobing function – used intensively on the Kaiser’s show - and before this he had really put it to the test for The Prodigy!

He has not yet been lighting the appropriate band with LEDWash 600s to fully explore the individual LED ring control, but reckons this is a nice feature that he’s also looking forward to using as and when the time arises.

The LEDWash 600s, together with other moving lights and a sprinkling of generics were supplied to the Kaiser Chief’s UK tour by Lite Alternative from Blackburn, and these were all controlled by Larkum from a Whole Hog Full Boar console. Chris Lundberg worked with Larkum as lighting technician for the tour.

A Pointless Achievement For Robe LEDWash 600s!
Gavin DeGraw and David Co...grandMA2 light on US Tour
New on SAT.1: “The Hit ...ants” from the Coloneum