K3 broadcasts its search with the d&b V-Series 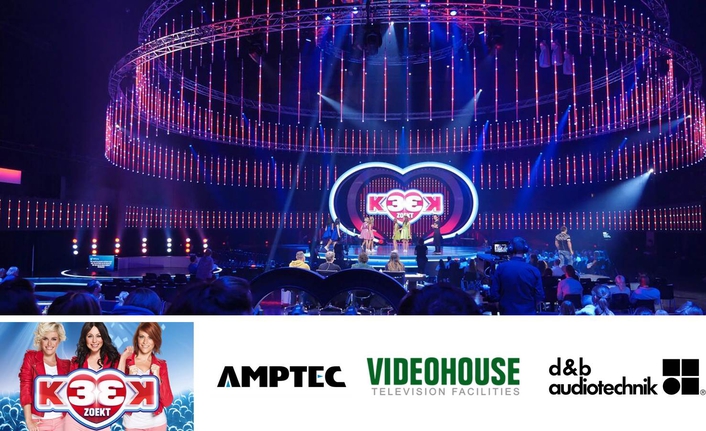 When a music group decides to change its line up or disband, the accepted practice is for the process to be an internal one, prior to press and media announcements. Not so if you’re K3, the Dutch and Flemish answer to the Spice Girls. Formed originally in 1998, the all-girl group has been a consistently successful pop presence on national television - on programmes aimed at pre-teen audiences.

In 2010 they replaced one of their three members through a TV talent show entitled ‘K2 zoekt K3’ (K2 searching for K3) and when the time came to find a completely new line up in 2015, management turned once again to the talent show format. ‘K3 zoekt K3’ was transmitted from the largest TV studio in Belgium and the hopeful contestants were judged by both the audience and the group’s existing members.

Videohouse was the supplier for all the broadcast facilities as well as the live sound reinforcement. Head of PA, Ad van Beek explains more, “K3 is a massively popular group here – you could compare this event with searching for a replacement One Direction in the UK – so the size of the TV venue reflected that. The AED Studios in Lint measure eighty metres by thirty metres wide and fifteen metres high. We had an audience of about eighteen hundred and the show went out weekly on Friday nights from September 4th for ten weeks.

“Amptec and Videohouse have worked together for over twenty years and the d&b audiotechnik V-Series is simply the ‘go to’ loudspeaker for TV shows of this nature,” continues van Beek. “We chose a combination of V8s and V12s for the main L/R arrays with more V8s as side fills for this wide room. Because of the nature of the set and last minute alterations, the arrays were trimmed very high for sightlines, so Amptec delivered some of the new V7Ps to cover the resulting blind spots. That ensured the vocal performances were not lost on any of the audience.”

Amptec Sales Manager, Frank Geerts explains further: “Delivery time for the new V7Ps was very tight. They were rigged separately on the day of the final rehearsal. When making the design, it is not always clear if we will achieve perfect coverage as last minute changes are often made to the setup. We chose V7P especially for its directivity. When making sound designs for TV, directivity is very important as you cannot disturb the emission with live sound.

“We have a longstanding working relationship with Videohouse. They have extensive experience with shows of this kind and are one of our most important d&b customers in the broadcast sector; they were one of the first, with an extensive d&b audiotechnik range from E0 up to D20. As always it was a delight to work with them.”

Van Beek is in agreement, “Amptec not only delivers the very best in sound reinforcement, they are always there when needed.  On shows like this we have to be able to rely on the customer service and the equipment. With Amptec and d&b audiotechnik we are guaranteed to get both.”

The final episode of the contest was the most viewed programme on national television in 2015. It was broadcast simultaneously in Belgium and the Netherlands, reaching 3.4 million live viewers.