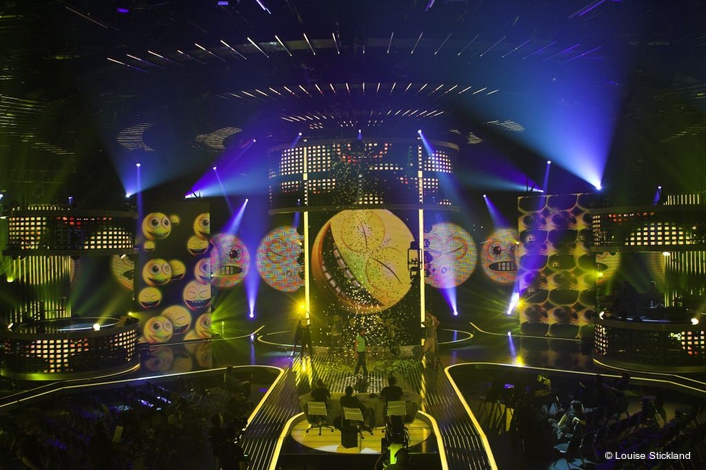 Video is delivered onto the different surfaces, including a central circular pod and two side pods

2 x grandMA2 light consoles and 9 x MA VPU (Video Processing Unit) plus are being used to deliver the stunning video and graphics package for the current series of German Pop Idol, which is being recorded in Studios 30/31 at the Coloneum MMC Studios in Cologne, produced by Grundy Light Entertainment.

The popular talent show series is now in its eighth series and is the biggest studio based show in Germany, complete with a live broadcast every Saturday on RTL, also enjoyed by an audience of 1,300 in the studio.

The set and video concept is designed by Florian Wieder (Wieder Design) and based on a series of interrelated 3D spheres and screen surfaces. Video is a vital part of the look and dynamics of the show, with custom content for each competitor and their different songs designed by Falk Rosenthal from Gravity Hamburg. Together with the lighting, designed by Manuel da Costa, this gives the production team massive flexibility and variety.

Video is delivered onto the different surfaces, including a central circular pod and two side pods, also circular which have top sections that move up and down, together with upstage and side screens and additional video elements ensconced in the Perspex floor. The total amounts are an impressive 1,084 modules of Barco i-lite 6, 2,608 modules of MiTRIX, 35,840 O-lite nodes and 1,474 modules of MiSTRIP. In total, there are about 2.4 million pixels of LED being controlled in the studio.

The video is operated (and composited) by Stephan "Mr Steffy" Floeren and Björge Block. The grandMA2 consoles were specified to control the 14 video outputs for this series by Floeren after using it on the Supertalent show (Germany's Got Talent) at the end of 2010.

Floeren has been using MA Lighting's control platform for about 10 years and has worked closely with MA in developing the latest version of software. This show is the first time that they have used this latest version of software with the grandMA2 hardware. "It's a great creative tool and the most flexible desk on the market for what I want and need to do, specially on a show like this," he enthuses.

In addition to all the stored playback video content for each week's show - which often changes right up until the broadcast, the MA VPU receive TX camera feeds from each of the 12 cameras, which they process super fast with very little latency - a maximum of two frames.

There are 2 x HD SDI inputs into the MA VPU from the switcher that receive the camera outputs, from which Floeren - in consultation with camera director Volker Weicker - then selects to output to the different screen surfaces.

There are 14 outputs of video from the MA VPU into the grandMA2 and the second console is running in full tracking backup.

Cool features for handling video on the grandMA2 include the ability to see the correct file names of video clips in a Windows file structure, which makes selection "Quick, easy and instant" across all the clips.

Content distribution direct from the console is new on the grandMA2, and for colour keying, the user can directly choose using an HSB colour picker rather than mixing on 3 wheels, which is a lot faster and more accurate.

Manuel da Costa is using 2 x grandMA full-size ‘series 1’ consoles to control all the moving and generic lights, totalling over 600 fixtures - a mixture of Robe, GLP and Martin moving lights, Novalight Nova Flowers, Sun Strips, PAR 64s, ETC Source Fours, 2, 5 and 1K fresnels and assorted LED fixtures including Leader Lights. Da Costa operates all the movers with one grandMA full-size console and a second running in full tracking backup, while David Kreileman runs all the generics from another grandMA full-size, also with an additional console in full tracking backup.

The video screens were supplied by PRG Germany in Hamburg, the MA VPU by publitec Präsentationssysteme & Eventservice GmbH and the lighting was supplied by Magic Light & Sound in Cologne.