The amazing team from Robe’s South African distributor DWR Distribution totally excelled themselves at the 2017 Mediatech Africa exhibition last week … taking visitors on a show-stopping ‘experience’, culminating in a fully choreographed show staged at their new demo / showroom facility in Randburg, Johannesburg. The star of the show was Jeffrey, an impressive 3.2 metre high automated robot, with a real character, an expressive face and all his major body parts made / highlighted using a variety of Robe lighting fixtures.

Jeffrey quite literally stole the hearts and minds of those visitors to the expo who were also lucky – and in time - enough to sign up to visit the DWR extravaganza!

Nicknamed ‘ROB-E’ … and loosely inspired by animated character WALL-E, the last robot left on earth … The creative concept of Jeffrey had been floating about in the head of one of  SA’s theatre LDs, Michael Broderick for about year! Michael had always wanted to use a motor system to manipulate a large robot with a moving light for a face … so he could smile and display other emotions!

The Mediatech show was directed by David Gouldie assisted by Grant Jacobs. Jeffrey was accompanied onstage by a cast of three – actress Jessica Sole and dancers Nadine Oberholzer and Danielle Mann – who performed five 12-minute high energy shows a day to capacity audiences of 95 each time.

DWR’s Michael Broderick comments ecstatically, “We wanted to do something different and more memorable and fun than just a standard trade show stand, so we all pooled ideas first to make Jeffrey a reality, and then built a whole journey around him. The reaction was phenomenal … we had high hopes but our expectations were completely exceeded on every level!” 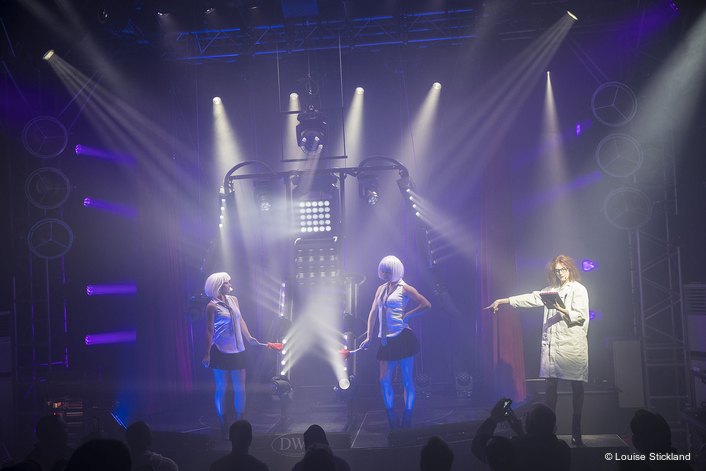 Jeffrey germinated from an ambitious hypothetical to ‘work-in-progress’ in February and as Michael and DWR director Bruce Riley started to look seriously about how some of the mechanics and engineering could be achieved.

Michael imagineered a lighting design at this stage and he and Bruce worked out which lighting fixtures they could practically and realistically use for the anatomy. They also involved Dylan Jones, DWR’s chief draughtsperson, who started work on the initial drawings and the talents and ingenuity of DWR’s head of engineering, Rob Young, assisted by Keith Pugin and the manufacturing team … without whom literally nothing would have moved!!

Michael was very keen to use lighting products from one manufacturer and when he looked at the options, he found that Robe had a perfect fixture for every body part and limb!

The forearms, biceps, thighs, shins and in fact all the limbs are made up from Robe CycFX 4 moving LED strips, as is the pelvis. The chest is a combination of a Robe Square (5x5 matrix of LEDs) and two of their new LEDBeam 150s.

The feet are both Spikies and in one hand he is gripping a MiniMe effects luminaire, with a Spikie in the other. 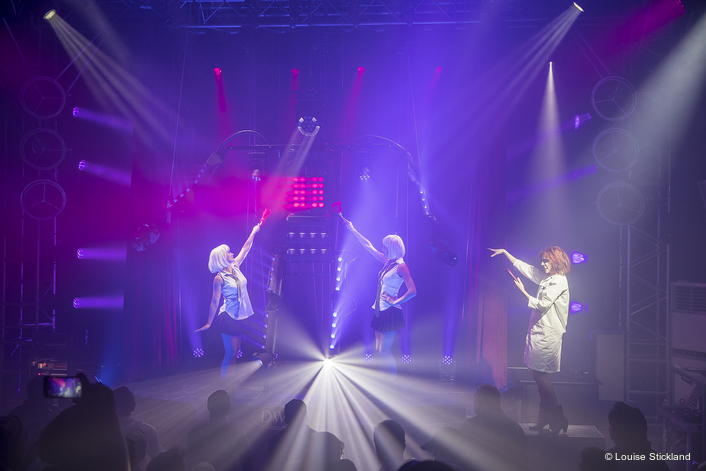 Once these fixture decisions were made, the other part of the equation was animating Jeffrey … who physically moves up and down, has full arm movements and a separating head!

Jeffrey’s feet are anchored via runners to a track on the floor with the rest of his body essentially flown from a mother grid made up of S52 Prolyte truss in the showroom. He is suspended from five 1 tonne Prolyft motors and one variable speed Bonfiglioli motor anchored to the floor for the body.

The arm movements are double pulley’d on four of the Prolyfts to get the required speed to keep in sync with the body movements and the motor used independently for the head. The head runs up and down on two steel wire guides that also support the body. Bruce Riley was instrumental in turning the automation into reality.

All the Prolyft motors are run via a Kinesys Vector control system and the speed of the Bonfiglioli motor is controlled using an MA dot2 console with DMX to 0-10V for variable speed and running contactors with absolute encoders for feedback to the Bonfiglioli inverter’s on-board PLC control.

After an initial budget was set, Jeffrey’s DNA started to evolve. However it wasn’t a completely smooth ride as he turned out to be a bit of an expensive experiment! At one stage, with escalating costs there was a real possibility his plug would quite literally be pulled!

The thought of this was so distressing to Michael, Bruce, Dylan, Rob and all who were already heavily invested in the project including Jeffrey, whose personality had already started to form. 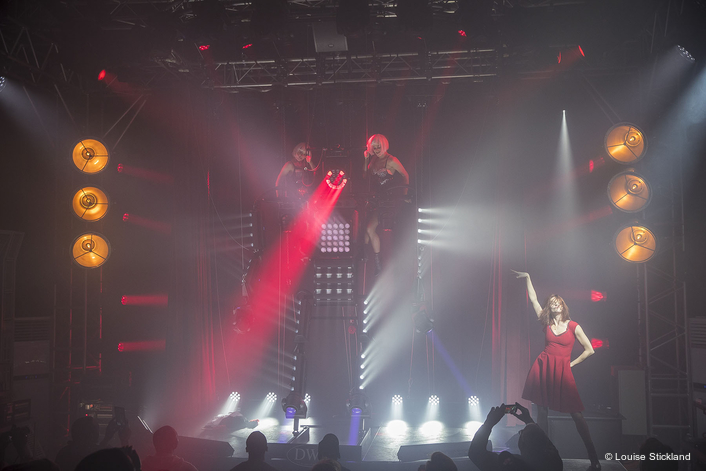 However the single minded determination of DWR’s Robert Izzett, to deliver something extraordinary at this year’s Mediatech … was Jeffrey’s saving grace.

“That’s when I realised that this project HAD to happen,” commented DWR founder Duncan Riley, “There was just so much expectation, anticipation and passion for it running throughout the whole company that it had to go ahead. At the end of the day … it is not about budget … it’s about ideas and giving them a chance to flourish!”

As soon as the project was re-energised, Michael immediately started to think about putting Jeffrey onstage so he could earn his keep and make a positive contribution to society  ... and the show started to really materialise.

The narrative was developed by David Gouldie (who also, with Michael, created the DWR originated ‘One Light Show’ which Robe then produced at PLASA 2015 and Prolight+Sound 2016) and the script written by Grant Jacobs.

They and Michael chose the soundtrack … a dynamic mash of many well-known tunes – memorably including a hilarious re-mix of Right Said Fred’s “Too Sexy for My Shirt”, and as this played out, a series of stunning related lighting effects really brought Jeffrey alive.

DWR’s Jannie de Jager was responsible for the lighting programming and operation using a grandMA2 console, joined at FOH by sound engineer Kyle Robson behind a DiGiCo SD12. 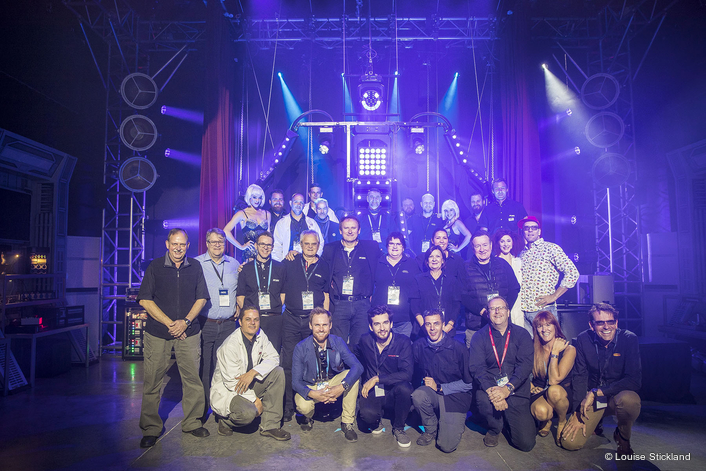 “It’s all about the people”…

For the three day Mediatech expo, DWR took a space in the Ticket Pro Dome and built an elaborate set portal, which was projection mapped using a Green Hippo media server by Dylan Jones with content supplied by Provisual Media.

DWR also set up a registration / check in desk utilising technology supplied by Gearhouse South Africa. Those who had not pre-registered for the DWR ‘experience’ trip, could also book at the stand – DWR donated the R50 per bum-on-seat to the SOS Charity Fund with a final amount of 75,000 ZAR raised.

Guests passed through the portal and disappeared into a tunnel full of lighting effects and onto a bus, which drove them the short distance to DWR’s office / warehouse just up the road. After Jeffrey’s performance, they had a chance to look at other brands distributed by the company, imbibe the great vibes and network with numerous friendly people before being bussed back to the exhibition. 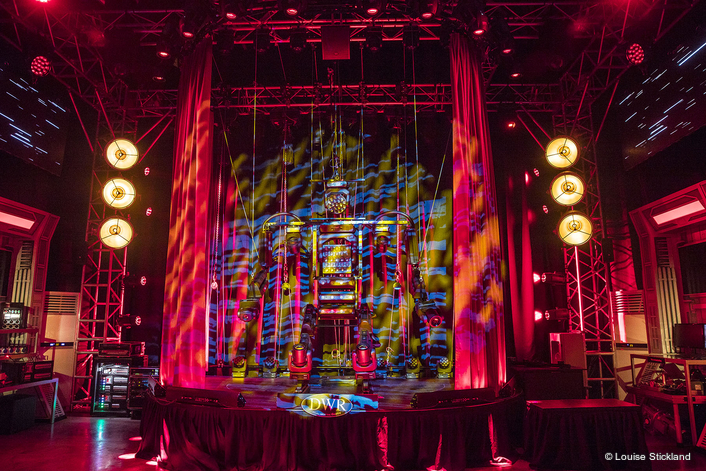 While Jeffrey’s show was highly visual, funny and entertaining and the robot proved a real character as well as a lively, innovative vehicle to demonstrate some cool technologies … a deeper message highlighted the caveat attached to chasing technology which is “as humans, we must be careful not to forego art in our quest for technology” explained Michael.

So … the legendary Dr. Frank-N-Furter better look out!!

The importance of diversity, humanity and knowing the essence of who we are is echoed in DWRs popular strap-line “It’s all about the people”… and illustrated in this case by one rather special robot!