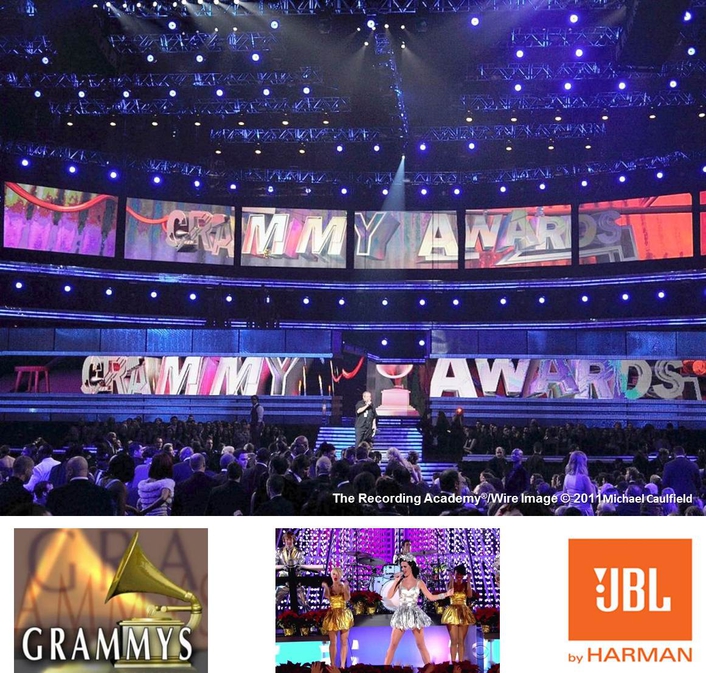 ATK Audiotek provided a JBL VERTEC line array system for the 53rd Annual GRAMMY Awards
On a night full of surprises, JBL Professional loudspeakers were once again called upon at the 53rd Annual GRAMMY® Awards to ensure predictable, high-quality live sound and audio for television broadcast. Held at the STAPLES Center in Los Angeles on Sunday, February 13, the GRAMMY Awards were broadcast live in HDTV and 5.1 surround sound on the CBS Television Network. As it has for the past several years, ATK Audiotek of Valencia, California provided JBL VERTEC® line arrays for live sound reinforcement, while JBL LSR studio monitors were used in the critical listening room for the telecast.

The annual GRAMMY Awards telecast, known as Music’s Biggest Night®, is presented by The Recording Academy® to honor outstanding achievements in the production and performance of recorded music. This year’s awards were marked by a variety of elaborate stage productions bringing together some of the biggest names in music today, including Lady Gaga, Eminem, Rihanna, Bruno Mars, Lady Antebellum, Cee-Lo Green and Katy Perry. Lady Gaga and Eminem both earned multiple GRAMMY Awards, while Arcade Fire won Album Of The Year for The Suburbs.

During the telecast, JBL LSR6300 Series studio monitors were used to monitor the broadcast in the critical listening room. Since the critical listening room was set up in a provisional space at the STAPLES Center, engineers took advantage of the LSR6300 Series’ on-board RMC Room Mode Correction system to compensate for acoustic anomalies of the room. “We used a 5.1 JBL LSR6300 Series studio monitor system to carefully listen to details in the mix, as we have for the past several years,” said Michael Abbott, Audio Director for the GRAMMY Awards. “Once again, the LSR monitors performed extremely well and helped us accurately hear the subtleties of the show.”

For live sound reinforcement, ATK Audiotek deployed 70 JBL VERTEC VT4889 fullsize line array elements in multiple overhead arrays, supplemented with JBL VRX932LA compact constant-curvature loudspeakers. “With such a variety of performers on stage during the Awards, and with such elaborate productions, providing live sound for the GRAMMY Awards poses its own unique set of challenges,” said Scott Harmala, CTO/VP Engineering, ATK Audiotek. “We have enjoyed tremendous success with the VERTEC line arrays for the GRAMMY Awards in the past and this year was no different. They provided powerful and accurate sound throughout the arena.”