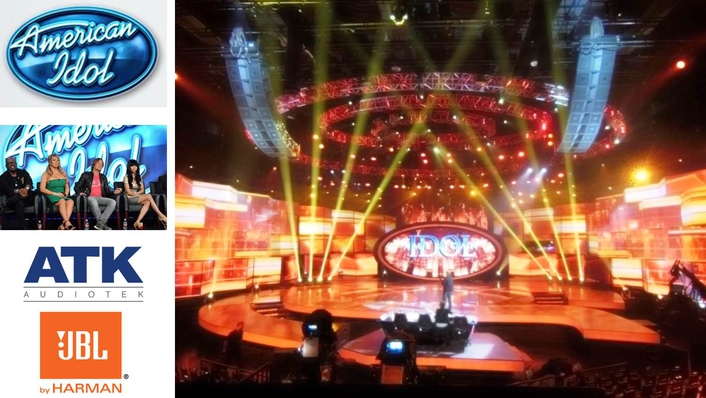 ATK Audiotek is providing a variety of JBL loudspeakers for the live set of the current American Idol season.
American Idol reigns on as one of the most successful shows in television history. Its mix of stars in the making, spirited interplay between celebrity judges and the show’s wildly enthusiastic live audiences continues to enthrall viewers. For the show’s upcoming live episodes, Valencia, California-based ATK Audiotek revamped the American Idol set with a variety of HARMAN’s JBL Professional loudspeakers to meet the unique audio demands of the show’s new staging.

Baltzell designed some novel loudspeaker arrangements for the new American Idol system. “We had to accommodate a number of needs for the new set at CBS Television City in Hollywood, and they can’t be accommodated by a one-size-fits-all system,” said Pat Baltzell, sound designer for American Idol. “The main PA needs to be heard loud and clear by the performers and audience. However, we need a separate audio system for when host Ryan Seacrest and the contestants are speaking, because they’re on lavalier mics and the judges are situated right in the middle of the main PA system.”

Left-right arrays of 10 JBL VERTEC® VT4889 fullsize line array elements on each side comprise the main PA system. The main hangs are complemented by a front fill system of six VRX932LAP Constant Curvature loudspeakers installed into the set. Two VRX928LA compact Constant Curvature loudspeakers are also installed into the contestant couch set to provide a mix minus foldback of the judges and Ryan Seacrest.  Four JBL Control 8SR speakers are installed in two additional mix minus zones under metal gratings in the stage serving as foldback speakers for Ryan and the contestants during periods of dialogue.

“Since the judges’ table is more than 60 feet away from the stage and the judges are somewhat removed from the main stage, we built three JBL AC15 compact speakers right into the judges’ table,” said Baltzell. “We know that as the season progresses, the audience becomes more animated, and come April and May when the number of contestants is whittled down and the audience has chosen its contestant, the ambient noise gets even louder but the judges still need to clearly hear the performances. The mix that is sent to the judges’ table speakers is only the lead vocal and the background singers. The AC15 does a remarkable job.”

“Another very important consideration is that a lot of the contestants are younger and they have big voices but limited microphone technique,” Baltzell added. “This puts a lot of demands on the audio engineers to control the mix and apply limiting, and for the judges to hear the contestants properly those AC15 speakers need to get loud without distortion.”

To ensure that dialogue will be clearly heard, no less than 280 Control 25 loudspeakers are placed under every other seat in the audience.

“The American Idol audio system might be unconventional, but it ensures optimum audio reproduction for dialogue, singers and musicians,” Baltzell concluded. “We’re looking forward to wowing everyone as the show builds to its season finale.”