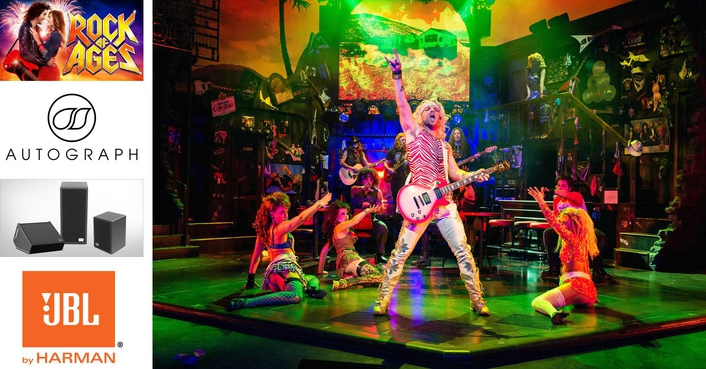 .
The hilarious, ‘80s-themed musical Rock of Ages has been packing in audiences on Broadway, Las Vegas and now on tour in the UK through November. Rock of Ages features classic hits like “Don’t Stop Believin’,” “We Built This City,” “Wanted Dead or Alive” and “Here I Go Again,” performed with nonstop intensity by a colorful cast of characters—all heard through HARMAN JBL’s AXYS loudspeakers.

London-based Autograph Sound is signed on as the tour’s live sound provider and Chris Full, Sound Designer at Creative Sound Design, is the Associate Sound Designer for the show. Full chose a JBL AXYS system for the Rock of Ages tour because it proved ideal for the production’s highly specific requirements. “We have a ruthless touring schedule throughout the UK,” he said. “Weekly touring in the UK is an art form – with limited truck access and the vastly different size and shape of the venues, from under 1000 seats to nearly 3000 - It’s challenging!”

The show features an elaborate wraparound set that has walls across the back of the stage and up each side, and many loudspeakers integrated into the set itself. “We can’t start to build the onstage audio system until the set is completed, which leaves us with an even tighter timeline than usual to put the sound system together,” Full stated. “So we needed a system that could be set up quickly with easy rigging and be seamlessly integrated into each venue without calling attention to itself visually or restricting audience sightlines – while delivering very loud and proud rock and roll sound levels.”

Full chose a JBL AXYS setup comprised of six Scope T-2115G2 15-inch 3-way loudspeakers, six Scope T-2112G2 12-inch 3-way speakers, 16 Flex U-14G2 and two Flex U-12G2 compact 2-way speakers plus four UB-25 15-inch vented direct-radiating subwoofers. “We used a JBL AXYS rig for the London stage production prior to the tour with excellent results, so we knew it would work well sonically for the tour production, but we had to make some changes and adaptations to accommodate the quick setup and teardown required.” 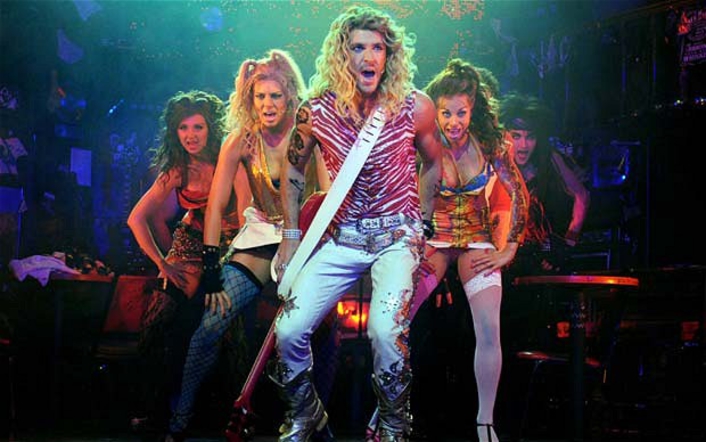 Full noted that because the music is such a crucial, central element to Rock of Ages, the sound quality has to be nothing less than exceptional. “The audio is at high-volume rock and roll SPL but there’s also a lot of detail and subtlety that needs to be reproduced, as well as dialog clarity,” he said. “So the biggest challenge of the design was achieving a system that packed a lot of punch but also provided that high level of detail.”

Full knew that using the JBL AXYS point-source loudspeakers would provide the required clarity and focused coverage while taking up a minimum of space and keeping rigging time down. “So many UK venues are like miniature opera houses, very ornate theaters where you find you have to make a concerted effort to deliver high-quality audio but without disturbing the appearance if these older, beautiful structures.” Full liked the AXYS’ ability to deliver high output from small lightweight enclosures, whose small size enabled quick rigging for optimum coverage throughout the audience. Each venue uses the same core loudspeaker configuration, with modifications as required to accommodate a particular hall.

One of the JBL AXYS loudspeakers’ biggest sonic strengths is their wide dynamic capability and ability to maintain their detail and clarity at any volume. “In Rock of Ages there are a lot of transitions from soft to loud volume levels and we need the audience to feel the presence of the music even when it’s being played quietly,” Full said. “With the JBL AXYS system, we can turn it up high or very low, and the mix doesn’t change. For a show that relies so heavily on dynamic contrasts for dramatic effect, that’s a fantastic advantage.” 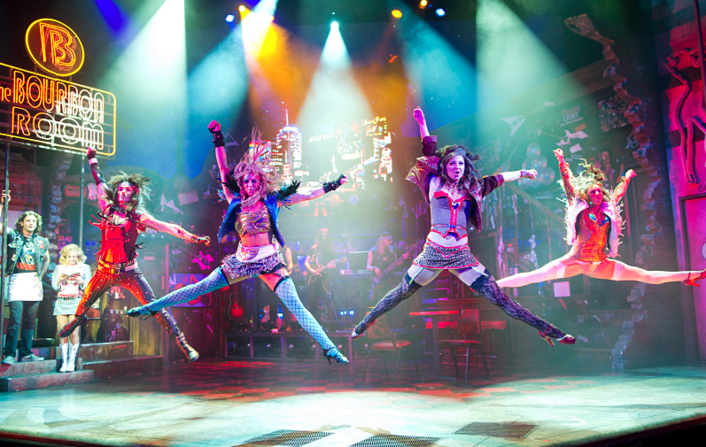 “We’re very pleased with the way the touring production of Rock of Ages sounds and the audience reaction has been fantastic,” Full concluded. “The attributes of the JBL AXYS loudspeakers, especially the ability to shape their sonic performance and coverage via DSP are tailor-made for a show like this.”