.
When Brazilian Latin Grammy Award-winner Ivete Sangalo recently celebrated her 20th anniversary in the business, she did so by recording a DVD called IS20. This took place at the large Arena Fonte Nova stadium in Brazil’s first capital of Salvador, which with its capacity of 52,048 will also be hosting some of the FIFA World Cup matches later this year.

Spectrum Design e Iluminação was in charge of the design concept and execution, and to fulfil the task of illuminating the grand stadium, they selected a large-scale package of SGM lighting equipment, including 200 X-5 white LED strobes, 66 P-5 RGB wash lights, 40 SixPack blinders and 24 Giotto Synthesis 700 Wash.

Accommodating Ms Sangalo’s audience of 40,000 people, while at the same time illuminating the stadium, was the challenge facing Marcos Olivio from Spectrun Design e Iluminação when developing his design concept. 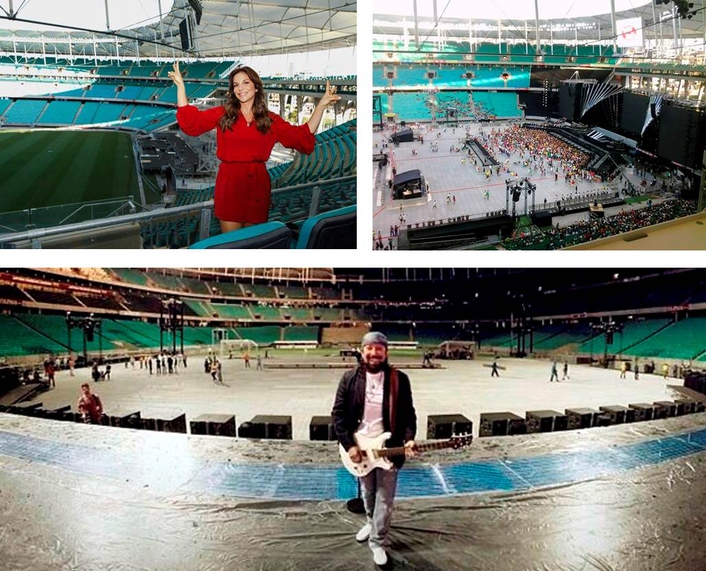 “The initial idea was to have the entire stadium lit, complementing the lights on the stage,” stated Olivio. “LED technology has made the challenge of illuminating large arenas or stadiums simpler and more economical. The energy requirement for these big shows is now much smaller and at the same time this new equipment provides a much greater intensity.

“Before SGM’s LED technology, we had to use PAR 64 lamps with large power generators and a lot of fixtures to illuminate large stadiums. Then came moving light washes, but the rental of these was too expensive. However, LED really started to change the very concept of lighting while still leaving room to continue evolving.”

The X-5s and SixPacks were positioned to form a back wall on the stage, while the P-5s were used to illuminate the white ceiling of the stadium, creating the perfect glow for the audience to safely cross the huge area.

Meanwhile, the back wall was created to provide effect-packed movement of light ‘dancing’ across the wall, keeping pace with Ivete Sangalo’s intense, upbeat and contagious music. Olivio underlines that for him the choice was simple when opting for the SGM equipment. “It was down to the intensity of all the LED fixtures combined with low power requirement. Can you imagine using 200 traditional 3000W strobes for this show? What an energy consumption”, he smiles. Furthermore, it was the colour range of the SGM products that also caught his interest.

Spectrun Design e Iluminação had previously tested the SGM product portfolio with full assistance from SGM’s exclusive brand representative in Brasil, LBO. “This made it much easier to choose the appropriate equipment to fulfil the lighting design concept. We have now mastered the equipment and are aware of its full potential”, the designer explains.

The singer-songwriter, Ivete Sangalo, will shortly be touring in Brazil with a light show and Marcos Olivio confirms that “there will definitely be X-5s in this project”.