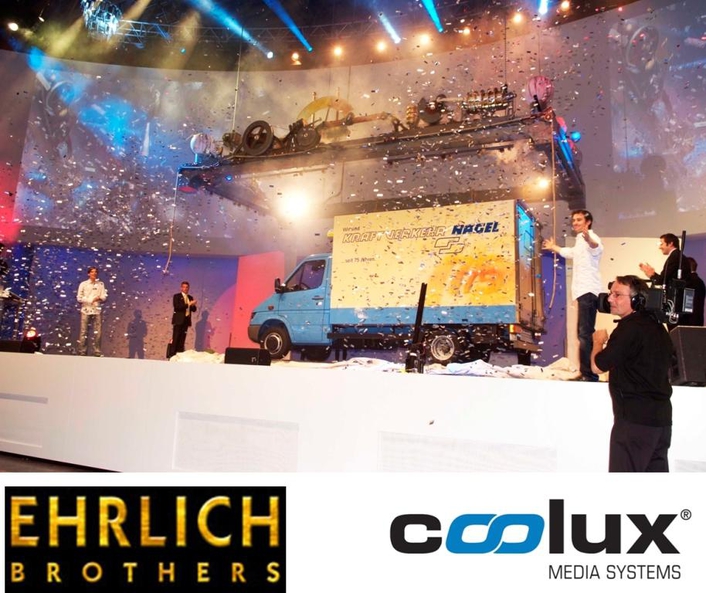 Ehrlich Brothers and the Jules Verne Act
coolux has always known that the process of designing, developing and manufacturing world-class technology involves a little bit of magic. In a way, it was only a matter of time, before professional stage magicians began using coolux products for their very own kind of glamorous performance magic.

Andreas and Chris Ehrlich, better known as „The Ehrlich Brothers“, are two of Germany’s leading stage magicians. Their impressive skills and innovative show concepts have made them an extremely popular choice when it comes to adding glamour and that special something to corporate festivities. Their tireless endeavours to master the arts of stage magic led them to win the German „Magician of the Year“ award in 2004.

How they manage to perform some of their amazing illusions must sadly remain a secret. They are more than happy to discuss what technology they are using, however.

Due to his extensive experience with sound and video editing, Chris Ehrlich began his search for a show control system that would accommodate his preference for a timeline based workflow. His search would ultimately lead him to the coolux Pandoras Box product range.

A creative spark stands at the beginning of any new illusion. The Ehrlich Brothers are the kind of performers who are not satisfied with simply recreating existing show acts, they are driven by the desire to innovate. Chris Ehrlich told us, how they bring their ideas to life:

„We are building everything ourselves, which means that we are entering new territory every time. We are happy to have found a „safe ship“ with the Pandoras Box, a ship that allows us to safely navigate to wherever we want to go, because it can interface with just about anything.“

One of their current show-acts is called the „World of Genesis“, which includes a giant world-sphere made of steel, that descends slowly unto the stage, until the Ehrlich Brothers suddenly appear right in the middle of the sphere, as if out of nowhere. During the act, the sphere’s continental plates move around the steel construct, the tension heightened by mysterious sounds of unknown origin. The inner core of the futuristic world sphere is additionally equipped with 144 LED lamps. 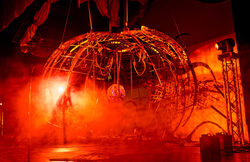 Using the „World of Genesis“ as an example, Chris Ehrlich explained to us, what role the coolux Pandoras Box plays during their shows:

„All of the world sphere’s functions are being controlled using the Pandoras Box, including the gyration and the movement of the continents. In addition to this, the Pandoras Box runs all our pyrotechnics, which are all placed on the timeline, as well as the effects inside the sphere, including fog. Our basic aim is to integrate all different sections of the show into our Pandoras Box network. The multi-interfacing capability is something that I find truly unique.“

Ehrlich Entertainment’s technical operator Florian Rabe commented on some further details of the evolution of their show set-up: 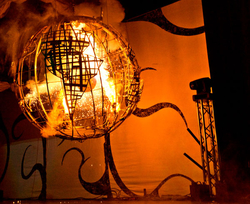 „Right at the beginning we were just running a small amount of audio and video content. The system we used back then was very simple and not really able to do a whole lot of different things. It’s really a great advantage for us to have the Pandoras Box now, especially since it is so easy to place keyframes on the layers. In the past this had to be done by hand. Nowadays we have one coolux Player for video, another Player exclusively for sound, as well as another Player for video content used for LEDs or background projections.“

Mobility is another key factor that appeals to Florian Rabe: „If we notice that we have to make some changes after a show, but have to pack up all of our equipment asap, I just take the stick, sit down with my laptop and continue working. It’s wonderful to be able to simply replace certain files.“

Not only coolux Pandoras Box Servers and Players are being used however, the coolux Widget Designer PRO plays an integral role in the show set-up as well. A touchscreen user-interface makes show controlling even more intuitive. Chris Ehrlich told us why: 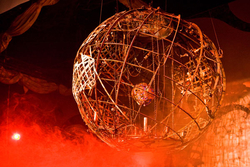 „Our main operator and I do a lot of the programming together. The two of us have prepared everything so that the whole set-up can also be controlled by people who only get to run the shows two to three times a month. It is super intuitive and includes cue specifications detailing when which button will trigger what. The Widget Designer is our operating hub. Every audio jingle and every video gets triggered that way. Should we happen to use LED-screens somewhere, than these are connected to a button as well.“

Having to work with slightly different team constellations and ever evolving shows most of the time explains why the Ehrlich Brothers like to rely on the Widget Designer, in order to minimize the chances of possible operating mistakes.

Another highlight in the two master magicians’ show programme has to be the „Jules Verne Machine“, an homage to the design style of the early industrial revolution that creates the wraparound scenery for an amazing apparition act. Within the blink of an eye, a truck (or a different object of similar size) appears on stage, where only seconds before there was nothing.

The technicians can release the Kabuki drop curtains in this case by simply clicking on a button. As a stage magician, Chris Ehrlich knows better than most people how crucial the factor timing is when performing live:

„Magic has to do with the right timing in many cases. Timing is actually more important than speed. Usually speed isn’t the problem, but timing is, if you are relying on triggering something by hand, or more generally when a lot of people are involved.“

When asked, if there was anything in particular he liked about the coolux Pandoras Box product range, Chris Ehrlich had this to say: „What is really beautiful is the „edging“ feature, which allows us to manipulate videos in whichever way we need. We could take videos e.g., that would usually be no wider than two meters when projected onto a screen, and make them fit the whole of the screen, without having to use any of the in-house video equipment. This way we can simply send a finalized signal to the technicians. We can really achieve a whole lot of different things that way, e.g. we could project onto the whole surface, but only have the left and right side visible. That kind of approach makes for great effects. This all just being a matter of programming the Pandoras Box has a lot of advantages.“