Intergalactic Trip For XL Video at the 2013 MTV EMAs 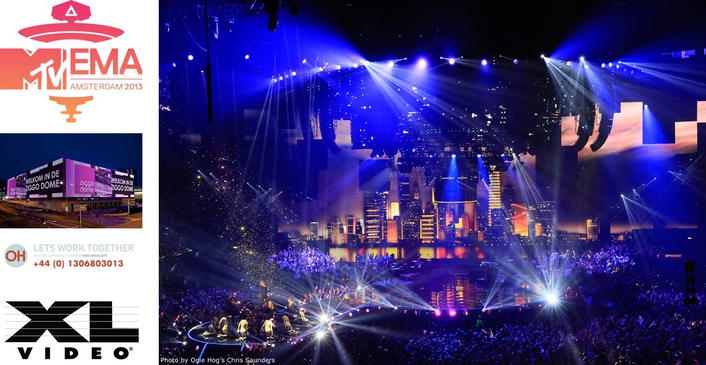 XL delivered nearly 800 square metres of various LED surfaces, video projections and creative / scenic LED elements plus control and 12 crew under the Project Management of Guido Ruysschaert to help realize an ambitious production design by Wieder Design from Germany. This was based on an intergalactic theme and featured a giant UFO style structure above a spherical stage. 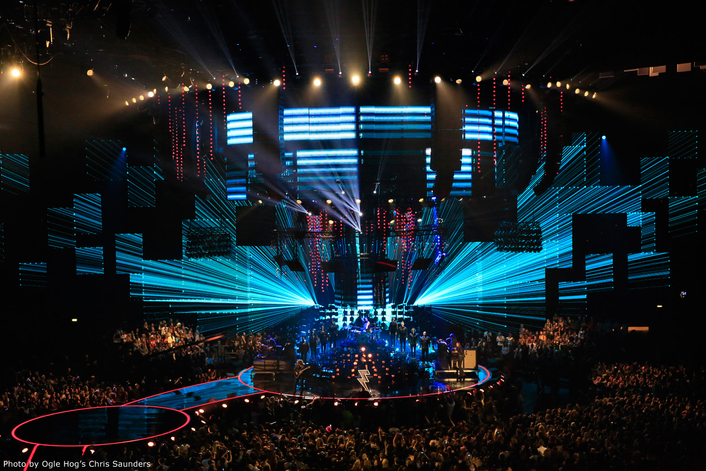 The 2013 EMAs, directed for live broadcast by Russell Thomas and lit by Tom Kenny, was attended by a live audience of around 12,000 and aired across MTV’s global network drawing record viewing figures – claimed to be over a billion! Fans worldwide cast a staggering 292 million votes* across all MTV digital platforms to help decide the 2013 MTV EMA winners, and the event is ranked as the ‘best ever’ in network history for votes, visitors, video views and social media activity.

The EMAs has always had a reputation for raising the bar with incredibly high production values, innovative design and a sizzlingly hot line up of live performance, all combining to present a superlative entertainment concept as well as recognizing multiple music genres and artists worldwide.

Guido Ruysschaert from XL’s Belgian office has worked on the event since it started in Berlin in 1994, when he was asked to supply two 3x3 41 inch video cube walls and the teleprompter for presenter Tom Jones!

Things have changed somewhat dramatically since then!

On his 19th EMAs, he specified all the video surface elements in close consultation with the Wieder Designs team of Florian Wieder and Matthias Kublik from Munich … and all the other technical disciplines including lighting, rigging, audio and drapes / soft goods to ensure that the massive high profile production ran smoothly and efficiently once on site. 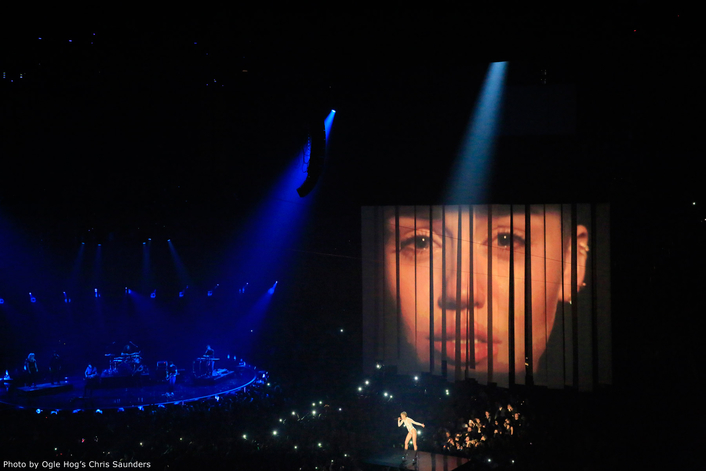 UK based Ogle Hog’s Chris Saunders was the Screens Director, and his crew of five engineered, specified and co-ordinated all the necessary control systems needed to deal with media playback, including, scaling, conversion, formatting, etc. of all pre-recorded video sources, managing their output to screen together with that of selected camera feeds.

At the back of the spherical main stage was an impressive 405 square metre wall of XL’s Pixled F-30 LED. In front of this in the mid-stage position was 110 square metres of F-15 which was flown in and out to block off the rear stage areas from view during band changeovers.

A ramp below the back screen served as access for artists and equipment.

The 1,545 Pixled FX-200 spheres were used to highlight the hub of the UFO, which consisted of several circles of trussing above the stage in decreasing diameters towards the centre and fitted inside one other. These dynamic truss circles moved into different architectural configurations continuously throughout the show.

Fitted to one of the circular trusses were eight 50 inch plasma screens.

Twenty-five square metres of Pixled F-18 LED were used to clad a central cylinder in the middle of the UFO, which lowered to the stage in the space rocket ‘lift off’ sequence at the top of the show … and Miley Cyrus emerged to get the party off to a high impact start.

Two hundred and ten square metres of Pixled F-25 were used to clad the outsides of two of the larger circular trusses, which also dropped right down to stage level at times, including for the start of the Kings of Leon’s rendition of “Beautiful War”.

The 72 x MiStrips – all at the custom size of 375 mm - were integrated around the UFO set and the main stage, all mounted vertically at 20 cm intervals.

Ogle Hog’s Chris Saunders brought his unparalleled experience of large scale “Video in TV” - meshing together all the separate contributors to provide a cohesive video show, resulting in a faultless performance.

Eminem’s boom box set from which he emerged to perform “Berzerk” was created at short notice by XL and local set builders Hollandse Handen together with rigging and drapes contractor Blackout. The brief was that it should resemble his associated music video and also be able to display their playback video footage. 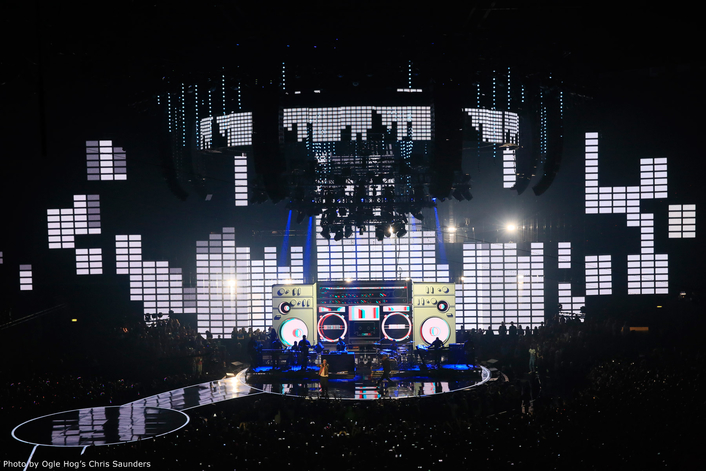 Some rapid thinking was required, and the set truck was constructed on wheels, complete with two scenic end pieces each containing two round ‘speakers’. Each speaker was ‘filled’ with 6mm LED panels stacked on a frame seated behind the cut out, leaving room for Eminem to jump onto the stage through the large right hand speaker.

The central section of the boom box was then made up entirely of Pixled F-6 panels - 96 in total which flew in from the roof.

Ogle Hog also supplied a high power projection system for Miley Cyrus’s incendiary ‘Wrecking Ball’ routine on one of the satellite stages which beamed close-up video footage of her face onto a special roll-down screen comprising multiple fabric strips. This was provided by Blackout and positioned behind the star - like all her other performances and the 2013 EMAs - this was much anticipated!

For Ruysschaert, the biggest challenges of the event were the sheer scale of it and the level of detail and communication needed between all departments and technical disciplines to ensure that everything fitted perfectly and contributed to producing an awesome show under a lot of pressure and expectation. 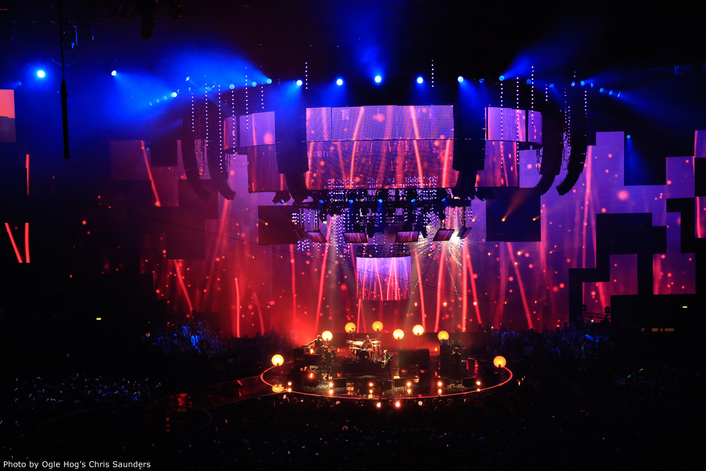 This process also involved audio designers and suppliers Britannia Row who had to squeeze their sound system in around the impressively large UFO, and Blackout whose riggers flew over 100 tonnes of kit in the air! The whole technical production installation was co-ordinated for MTV by Live Event Production Manager Maggie Mouzakitis and her team.

Looking at the end result, some amazing collaborations, imagination and a real commitment to creative, production and performance excellence on all levels produced stunning results that set new standards in the all-action world of live telecasts.