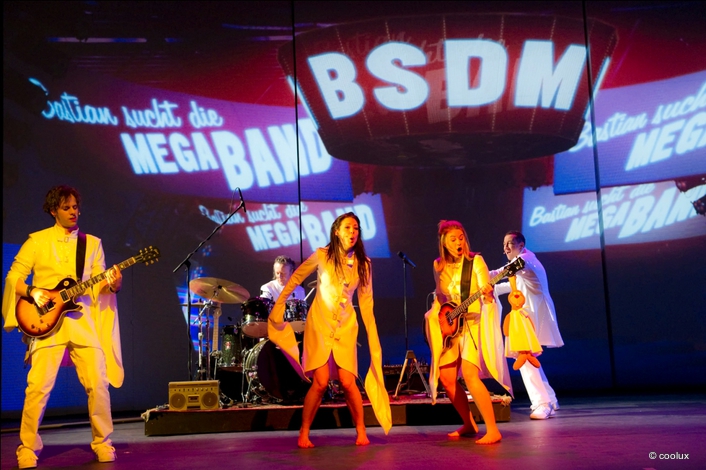 Die Patienten
Famous Swiss entertainer Marco Rima is currently starring in his very own comedy-musical "Die Patienten", set in an asylum for the clinically insane. In addition to his performing live on stage, creative workaholic Rima also wrote the script and produced the show. The joyful visual insanity of this challenging project was made possible with a fair share of coolux technology and expertise.

One special feature of this particular project was projecting onto three independently revolving walls. Each wall was six meters high and appx. 2.5 meters wide. All of the walls were able to turn a full 360° degrees. They were operated using a Widget Designer Pro with an integrated sensor link. The Widget Designer was used to start and stop the engines moving the walls via a GPI-contact, with each wall fitted with a sensor transmitting position feedback back to the Widget Designer. When in action, the walls were moving right until the correct sensor position had been reached.

The ability to stop the entire system was ensured through the use of two emergency buttons, one located on stage and the other programmed into the Widget Designer. Prior to the show, all wall positions had been saved as scenes and were ready to be selected via the Widget Designer.

All in all six different wall positions were used throughout the show. During the actual revolving action, dancers were brought on and off stage.

Projections were used on four of the wall positions

Projections were used on four of the wall positions, making it a total of eight warping files, four for each output. A different warping file was loaded onto the timeline according to each scene.

The Pandoras Box Manager was driving the complete projection, including all film clips, via Timeline 1. A substantial part of the projection was activated through interacting with the actors on stage.

One example of such interaction was the opening of elevator doors once an actor came to stand before them. The operator then triggerd the action via the timeline. A substantial part of the video content was accompanied by synched audio files for effects and atmos.

Approximately sixty manually activated cues were programmed into the timeline.

The original content took up almost 600 GB of space, with a mere 100 GB remaining after the compression phase.

The show’s band was playing in a separate „garage“-style room, which was filmed live with a camera. This „garage“ was set up to act as a green screen studio, which allowed the band to be integrated into the set during some of the show’s scenes while they were playing.

The colour keying was done exclusively using Pandoras Box, which resulted in a flawless workflow, even during moments of fast paced action. The camera’s and the input-card’s latency was reasonably unproblematic, given that the music was being played live.

All of the show’s set pieces were created using projections. The entire show was thus produced without using any old school set pieces, following the brief of the creative concept behind the production, that was aiming for a multimedia-merging of dancers, musicians and video content. 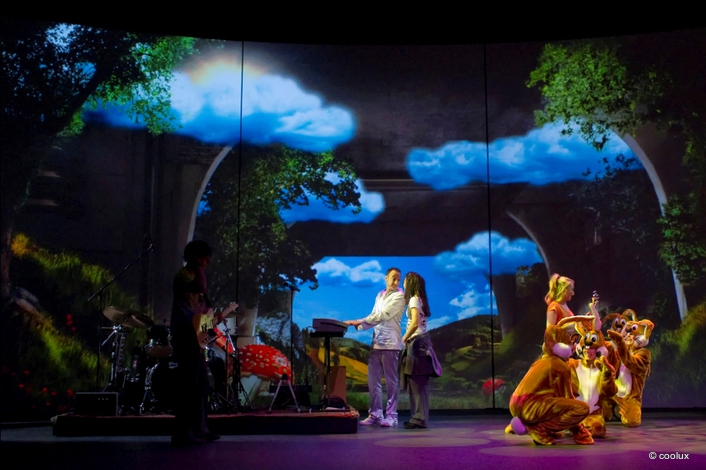 The following equipment was used to achieve the desired results