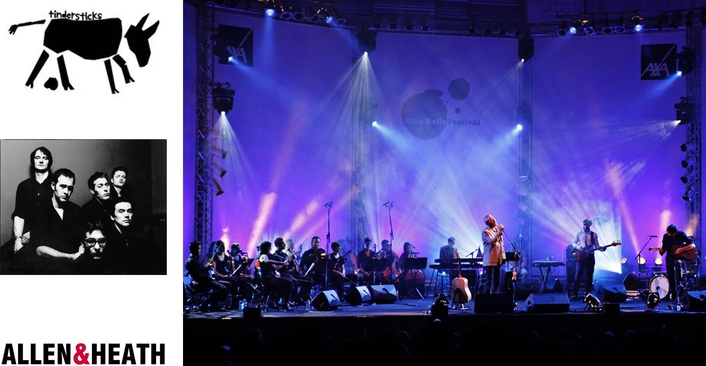 .
An Allen & Heath iLive system with 18 ME-1 personal mixers were employed for a special 21st anniversary show of UK band, Tindersticks.  Part of a European summer tour, the band performed a special set at the Blue Balls Festival in Lucern, Switzerland, where a 17 piece string section played alongside the regular 6 piece band.

For the tour, monitor engineer and long term iLive user, Jamie Hickey, specified and hired in a compact iLive system from APR Audio, comprising an iLive-R72 Control Surface and iDR-64 MixRack with remote control via a PL-6 fader panel and iPad. The anniversary show was held in the magnificent KKL Centre concert hall, where Hickey was tasked with meeting the audio needs of 23 musicians, supplementing the iLive system with 18 ME-1 mixers to provide in-ear monitoring for each of the players in the string section.

“The biggest problem string players have when accompanying bands is that they're not always able to hear their own instrument over the clatter and bang of a rock band," explains Hickey. "I wanted them to have the option to turn up their instrument in the IEM if the sound of the band became too much. So I simply assigned the direct out from each of the string channels to the corresponding player's ME-1 and disabled all the other buttons, so they had one volume control pot. The K&M mounting clip that comes with the ME-1 was perfect to attach the unit directly to the player's chair, negating the need for extra clutter."

Hickey continues:
"The versatility, ease of use and compact size of the iLive system means that when touring with a bus and trailer, we can still take a monitor desk, wedges, line system and mics and not be overweight. When I arrived in Lucern, the house techs were shocked to see the size of the R72, knowing the number of ins and outs we were using. With some creative use of the scenes, I was able to populate the surface with 48 inputs from stage, 6 FX sends, 6 FX returns, 8 DCAs, FOH talk back and 16 wedge/IEM/sidefill outputs, plus 18 more outputs to the ME-1's - 17 for the players and 1 for me. All from a 12 fader console!"

To enable control of the large I/O count from such a small surface, Hickey also used a PL-6 remote controller and an iPad loaded with the iLive MixPad app, and created 3 'special' scenes, where the only changes were Bank 1 and Bank 2 strip assignments.

By using 4 key scenes labelled as ‘ALL SCENE’, ‘STANDARD’, ‘BAND’ and ‘STRINGS’ Hickey is able to have quick access to effectively different mixers and can update changes by simply selecting different scenes. So when adjustments to the string section were needed he selected the ‘STRINGS’ scene and the strips had the 24 channels and group masters laid out as desired. The ‘BAND’ scene put all the band’s inputs, outputs and FX along with 4 groups of strings and strings reverb giving Hickey control to set the relative levels of the players in each section, group them, compress and EQ and send 20 channels of strings to each band member using only 4 faders. The ‘STANDARD’ scene was Hickey’s starting point, which was recalled before making any changes and saving updates to scenes, while the ‘ALL SCENE’ preset contained all the talk back and control faders as well as the band’s ‘regular show’ fader assignments without any of the string section. With this careful Scene management, Hickey was able to get the best from the system with just the 12 faders on the R72. 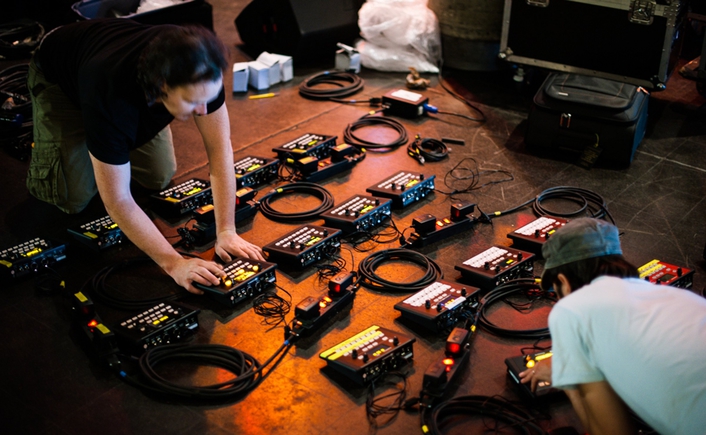 “I used the R72’s 8 user defined keys for 'MIX SELECT, PFL COMBO' on my main 8 wedge mixes, so to enable fast scene selection I used a PL-6. It's a great addition to any iLive system as you can programme virtually any parameter to a button or fader. This meant I could have direct access to either the 'Standard,' 'Band,' or 'Strings' scenes at the press of a switch," Hickey explains.

As well as the ME-1's for the individual string players, Jamie also gave each of the 4 sections a wedge mix. These mixes contained the players in the other sections and key elements such as drums, bass, piano and lead vocal.

"Soundcheck time was very limited. After our regular band soundcheck, we had about 30 minutes to mic up and soundcheck the strings before rehearsals started. Having such a comprehensive iPad app to accompany iLive really adds the cherry to the cake. Once I'd heard each line and EQ'd them all, I was able to sit in front of each section's wedge and dial in exactly what they wanted. At no point did anyone have to ask for more as they simply turned the Master Level knob on their ME-1! " he concludes.