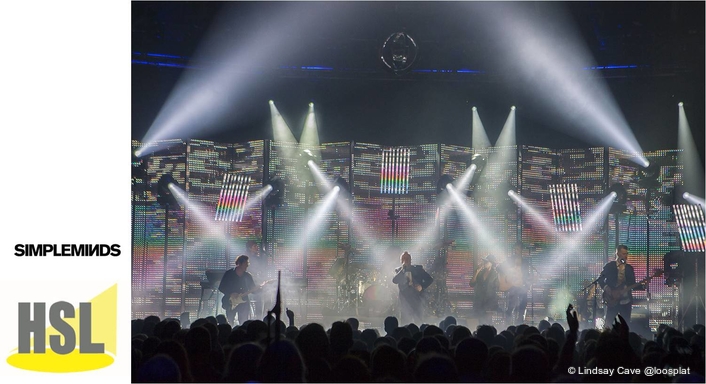 HSL is delighted to be on the road again as lighting suppliers with Scottish rockers Simple Minds and their long time lighting designer Stephen Pollard who has created another innovative look for the band’s acclaimed new “Walk Between Worlds” album.

Released in February as part of a celebration of an incredible 40 year career, the album is a blend of the introspective yet optimistic elements of their music with some huge electronic and stadium rock moments that kept them on the ‘alternative’ side of cool.  The performance features the entire new album, bookended by a careful selection of Simple Minds early material and classics.

This was a showcase tour for the new album.  As such the show paused for two Q&A sessions between Jim Kerr, guitarist Charlie Burchill and journalist / radio presenter Billy Sloan.  The Q&A sessions included chatting about the new album and how the band’s music has changed and evolved over the years.

Visually for this tour, Jim wanted a dramatic change from what had come before for, Stephen explained… a different way to presenting a show that combined a popular pick of hits whilst showcasing the powerful work from the new album. Rather looking at the past at this stage of their career, the emphasis was on the future. 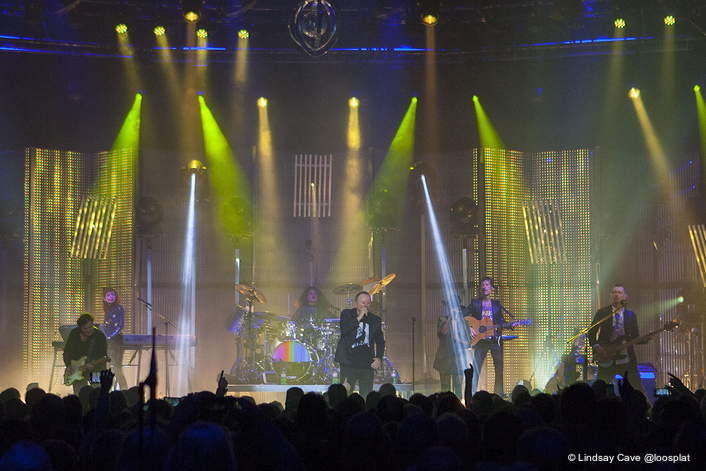 HSL has been the band’s lighting supplier since 2011, when Stephen first met MD Simon Stuart at HSL’s Blackburn UK headquarters, and has taken his business there ever since.
“They always do a fantastic job and are a pleasure to work with,” he affirmed. The account is project managed at HSL by Andy Chatburn.

This first leg of the UK tour played to a selection of intimate venues around the UK and Europe.  As a proving ground, the new material consistently went down well every night with the fans singing every word of the new songs even though the album had only been out a few days.

One of the very noticeable and recent changes within the band is founding members Jim Kerr and Charlie Burchill have been joined by an exceptionally strong female line up featuring drum/percussionist Cherisse Osei, keyboard player and backing vocalist Catherine AD and long time backing singer and sometimes lead vocalist Sarah Brown. Together, with bassist Ged Grimes and multi-instrumentalist Gordy Goudie they make up one of the most formidable Simple Minds line ups ever. 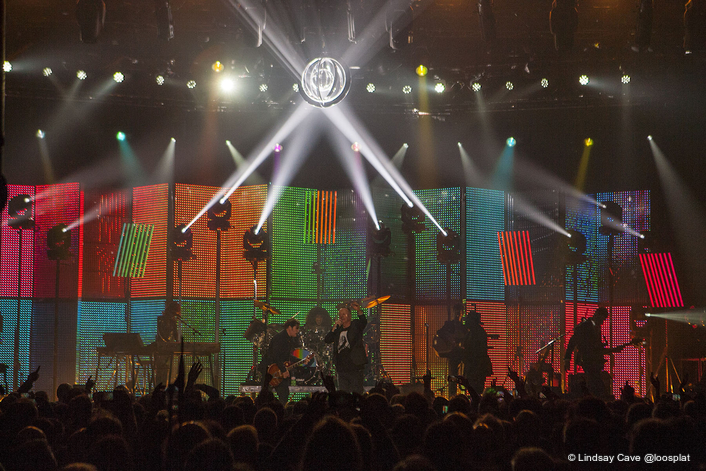 “Jim really wanted to keep the impetus we achieved with the last acoustic tour going with these new additions to the band,” explained Stephen. Also with this, he wanted a new visual approach.
Stephen’s Simple Minds shows in the past have a reputation for being beamy, blindingly bright to dark and moody, but this time the brief was to do something radical and new ... so he did!!!

This gave the combination of two very different mappable lightsources through which he could potentially play video as well as programming traditional lights, one outputting in the tungsten CT range and the Sceptrons in full colour and cooler, crisper whites.  They were dubbed the “Sceptopix”, and five were used on this leg of the tour at different heights positioned around the stage, giving full tungsten / daylight effects as well as dynamic blocks of video driven output. 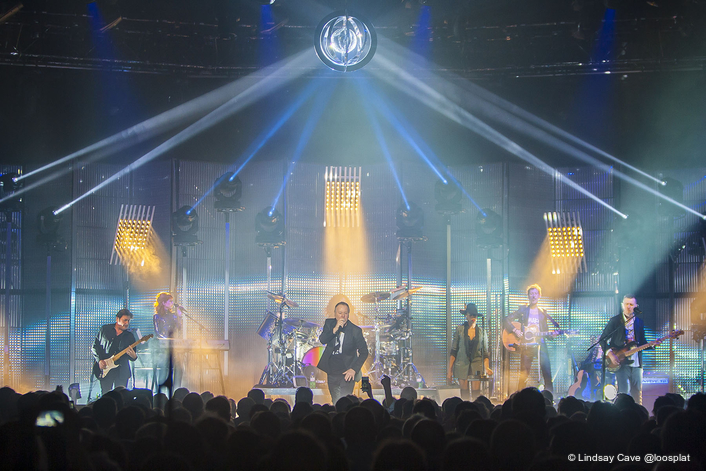 HSL’s Andy Chatburn engineered and fabricated all the Sceptopix fixtures. Andy commented, “Stephen usually comes up with something off-beat and wacky, and we really love challenges like this and making his ideas into tourable solutions”.

All the lighting specials for this section of the tour had to be floor mounted and quickly and easily deployable, and these were combined with a very straightforward promoter-supplied two truss rig specified by Stephen, comprising seven spots and six wash moving lights in the front and eight washes and seven spots on the back.

Upstage, the design included two rows – one above the other - of Martin LC2140 plus semi-transparent 2m x 1m LED video panels. The LC2140 panels were concertina-ed in seven 2-way jointed sections in order to be free standing and behind these, Perspex mirrors were fitted to reflect the lighting, video, the band and in which the audience could also see themselves!

Lighting pointed into the mirrors and strobes in particular produced some crazy funky looks that brought a completely new spatial dimension to the stage. It also made the entire video surface appear larger than it actually was in a neat bit of visual illusion!
Twelve Martin Axiom hybrid moving lights were mounted in stands positioned at different heights upstage, and 14 Mac Aura XB were positioned around the floor and set risers.

The riser edges were also mirrored but the fronts remained open as to allow a see-through path to the video screen at the back.  At times with the smoke and atmosphere, drummer Cherisse Osei appeared to be floating. 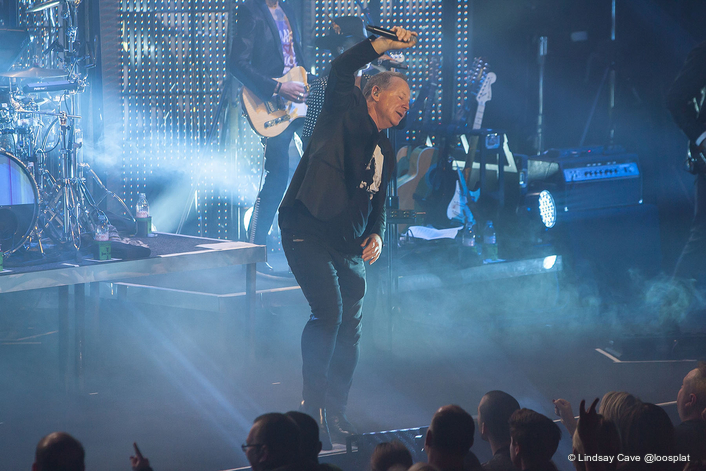 Stephen created all the tour’s video content working in conjunction with programmer Matt Brown. Much of it was inspired by the ‘Walk Between Worlds’ album artwork, graphical, bold and colourful in content, run through a Catalyst media server where it was animated, treated and affected. This was triggered via Stephen’s grandMA full size console.

Ryan Soave joined Matt as the second HSL crew-person technician, with Stephen commenting that both were “Fantastic people, highly skilled and great to work with”.

He continued, saying, “I really love the way HSL come up with good practical solutions and help me stretch the budget – and the creative options - as far as possible”. He is really looking forward to taking this basic design concept and growing and expanding it as the album cycle unfolds. Currently they are planning the campaign – their 17th studio work - over the next two to three years. 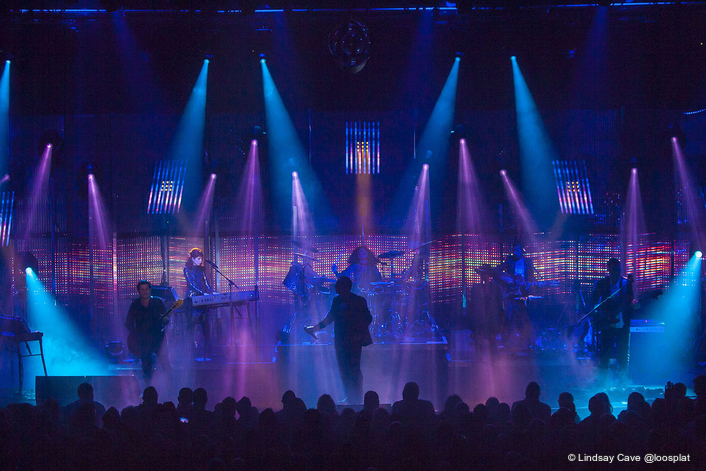 Stephen has worked with Simple Minds for an incredible 38 years, “most definitely the longest relationship I’ve ever had,” he quips.  Over that time he is still coming up with plenty of new, fresh and imaginative visual ideas and concepts.

He comments that it has been an incredible journey not just personally with the band, but seeing how the technology has evolved and changed in that time and how that has consequentially enabled different and continually exhilarating approaches to each touring campaign!