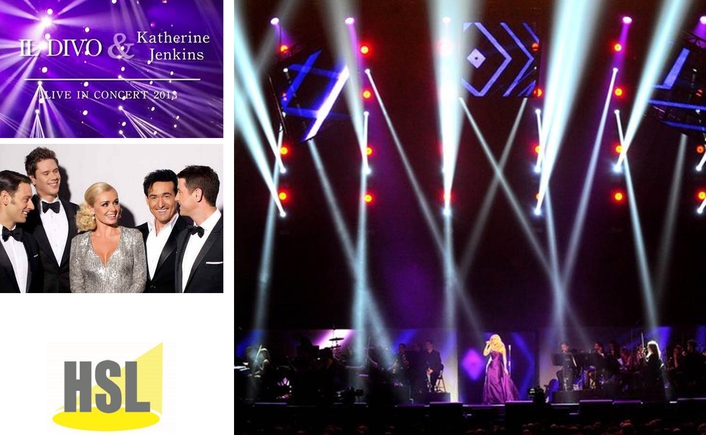 For the first time, Il Divo performed with Welsh soprano Katherine Jenkins on the tour, which featured lighting designed by Dave Davey one of the UK’s most successful television lighting designers. Davey’s work includes high profile shows like The X Factor, which is where he originally met Il Divo’s Creative Director, Brian Burke.
The tour visuals featured some spectacular crossover lighting styles from both TV and live disciplines.

Davey has worked with HSL on a number of projects. For the tour, he brought in Tom Sutherland as Touring Lighting Director, and together they visualised the show at Elstree Studios for a week, followed by a week of full technical rehearsals at LS Live and then four pre-show days in ahead of the first gig in the Ergo Arena, Gdansk, Poland.

Burke’s brief for this tour was a complete departure from 2012’s ‘Wicked Game’, which featured large and very prominent moving curved video screens. For this one, it was down to the lighting to provide the set element and all the essential stage architecture, with video very much in a supporting role. He wanted the lighting to ‘breathe’ with the music and singing.

HSL’s Mike Oates project managed, commenting, “It was great to see Dave’s magic being worked in a different environment. The show was elegant and beautifully crafted, and he and Tom with their televisual backgrounds brought a completely different dimension to the visual equation”.

Starting far upstage, there was a starcloth right at the back and in front of that, eight vertical trusses, all pre-rigged sections loaded with a mix of 32 x Vari*Lite VL500s, 48 x 2-lite Moles, 48 x Clay Paky Sharpies and with a Martin MAC III Profile at the bottom of each section which was about four metres off the deck. 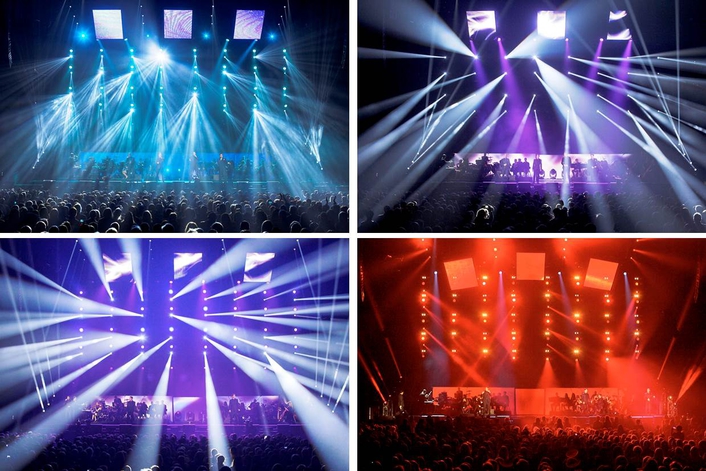 Downstage of these was a back truss rigged with MAC III Profiles and V*L3500s, and in front of that, four ‘finger’ trusses running upstage to downstage with a mix of V*L3000 Spots and Sharpies, complete with a 4-lite on the audience end of each truss for crowd illumination.

On the floor, there were simply eight Sharpies raking upstage and three MAC IIIs in the entrance-way at the back used for silhouette moments These were mounted on custom HSL wheel bases to facilitate easy manual movement on and off their marks.

Simon Chalk, conductor of the 22 piece Heart of England Philharmonic  orchestra was highlighted with a single Robe LEDWash 600 ‘special’.

Lighting was all controlled via a Compulite Green console, Sutherlands choice as the desk with which he is most familiar. Another Green was run in tracking backup, and the show contained over 600 cues.

Creating a haze that was acceptable to the band, and with enough staying power and quality to produce nice atmospheric lingering haze to accentuate the light beams proved a real challenge. Several machines were auditioned – and sacked - until they finally hit a chord with Cirro Lite Strata CS6’s.

“We spent a lot of time programming detailed and complex movement and colour cues (over 600 in the show) that emphasise the lifts and falls in the music and the tone and emotion of the different pieces, all of which required split-second spot-on precision timing” explains Sutherland.

As lighting was also essentially ‘the set’, there was the additional pressure on the medium as an aesthetic vehicle to articulate the show live.

The concept worked brilliantly. Lots of dramatic multi-fixture sweeps, bold saturated blocks of colour, Sharpie style laser-effects, momentary WOWs – much of it simple but epically proportioned and highly appropriate for the arena environment.

The stark and raw ‘essentials only’ approach to lighting and visuals kept a focus on the performance and helped maximise its impact. 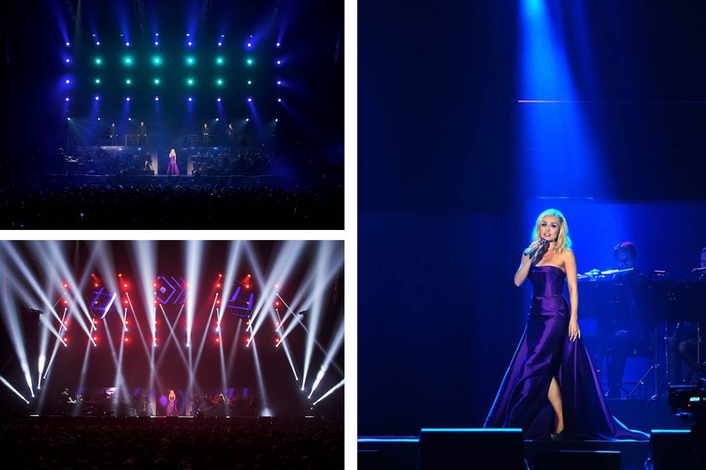 Video
In the roof three pods were made up of Martin EC10 screen and  each rigged on four Kinesys motors. They flew into different shapes and positions throughout the show adding an extra dynamic and also helping to ‘close down’ the stage for the more intimate numbers.

Filling in the stage at the back, just upstage of the orchestra, were three sections of Martin LC series screen with fold-back edges, staggered to form entrance / exit ways.

All the LED screens were supplied by HSL and fed with content stored and played back from a Catalyst media server run by Stuart Merser.

Sutherland’s lighting career started when aged 12 and went professional five years later, since when he’s worked constantly primarily in the television sector. This was his first full concert tour … and he’s really relished the experience.

“They were all fantastic!” declares Sutherland adding that he enjoyed the banter along with everything else! “HSL is a really excellent supplier - great support in every way and very well prepped kit!”.