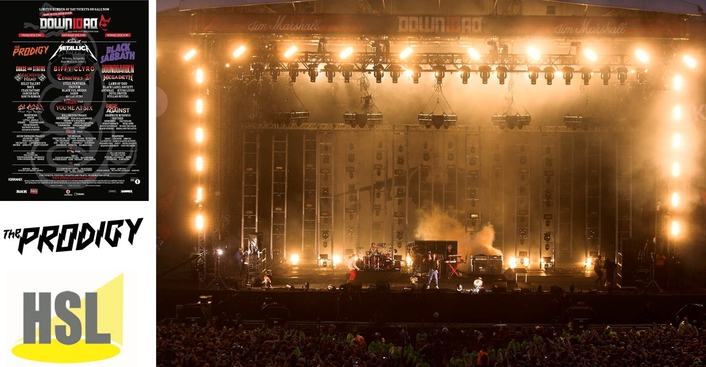 The initial lighting design was completed in WYSWYG, and pre-programmed in the two weeks immediately before the show
Lighting andvisuals rental company HSL supplied a substantial ‘specials’ package –including 170 moving lights, custom metal ribs inset with LEDs and a Kinesysautomation system - for The Prodigy’s hell-raising headliner performance at the2012 Download festival, staged at Donnington Race Track near Derby.

The band’s show visuals were designed by Andy Hurst. As you’d expect it was a high impact, high energy, relentlessly pumping show musically and visually.

As it was also the band’s only UK festival appearance this summer Hurst wanted to do something on an epic and grand scale.

The backbone of the rig was 16 x 8 metre high curved ‘ribs’ which were all individually outlined with LEDs, flown across the full stage width on three staggered upstage trusses. The idea being to add depth to the whole performance space.

These trusses were flown on Kinesys beam trolleys so they could be tracked upstage during the day and concertina’d together, saving as much space as possible  and not encroaching on all the other daytime stage activities. 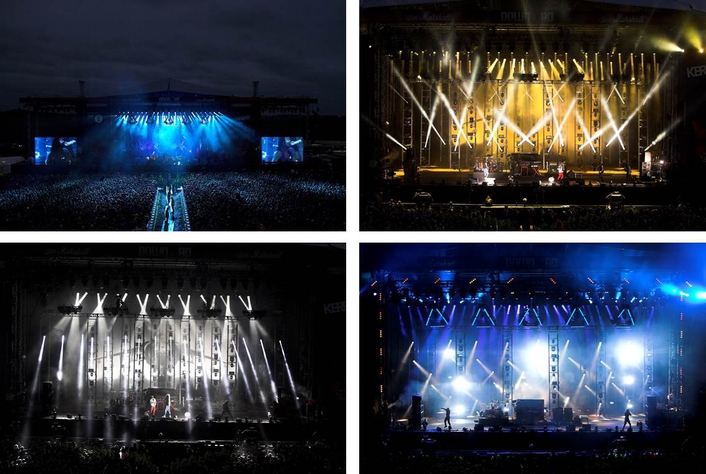 During the changeover just before Prodigy made some serious noise, they were tracked downstage and into place with 2.5 metres separation between each truss.

Hurst spec’d 96 of Robe’s new ROBIN LEDBeam 100s which were dotted all over the ribs and used for fast zappy, punchy tight beam effects. He also utilised 63 Clay Paky Sharpies for zip-zapping around the stage and lots of zany movement.

Forty eight Atomic strobes were spread all over the ribs, and 16 Robe LEDWash 600s were positioned on the downstage edge of the deck – where the band like to concentrate their high octane performance -  for front lighting.

Downstage, five triangular pods made from 30 cm trussing and hinges were flown on ten Kinesys 20 metres-a-minute Liftket motors. A JTE PixelLine picked out the edge of each triangle and they were also loaded with three Sharpies each. When they first lowered in it was like a Space Invader moment as they appeared to battle with the band!

In addition to all this, Hurst also used the lights available on the festival ‘house’ rig.

The initial lighting design was completed in WYSWYG, and pre-programmed in the two weeks immediately before the show. On site, they had one full night of programing in situ – which was accompanied by torrential rain and bitingly cold winds as the site was transformed into a huge swamp of mud.

The biggest technical challenge came with rigging such a large amount of kit in a short space of time, all of which had to be carefully fitted in around the house equipment and points and ….. then removed immediately afterwards.

The get out was achieved in an impressive three and a half hours after the show ended, leaving the stage clear for the next night’s headliners, Metallica.

Says Hurst, “The design was created as a one off for Download festival. I wanted to  fill the stage top to bottom as well as give the space a distinctive set architecture. The ribs gave an industrial look and created a great deal of depth … due to the fact the band performance area is only 17ft deep from the down stage edge of the stage.

“Everyone at HSL and my lighting crew worked really hard to get this show in, up and running with no rehearsals, which was a great achievement in itself”.