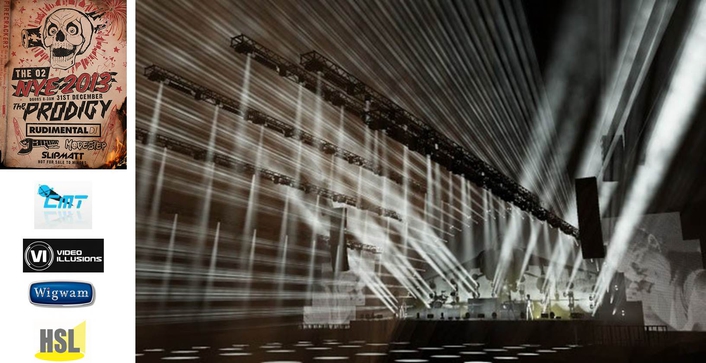 .
Legendary EDM rockers The Prodigy celebrated the New Year in style giving it some serious noise at a sold out London O2 Arena gig, with lighting and LED screens supplied by HSL and an epic production design by Andy Hurst.

Hurst has been the band’s Show Designer for five years and was asked to come up with something awesome and fitting for the occasion and an incendiary set by The Prodigy.

Hurst took a photographic backdrop of a Harrier ‘Jump’ Jet as his creative starting point and designed the lighting rig - both over the stage and above the audience - to give the impression of the O2 being a giant aircraft hangar, and develop a big, bold and bombastic show aesthetic.

The rig had to be installed in a day, so Hurst had to ensure that the design was practical to get-in and rig a large amount of kit and be up and ready for doors. To this end, he also spent five days pre-programing in HSL’s WYSIWYG suite, so he had a real head-start on that side of things.

On the night … out over the audience 60 x 10ft sections of pre-rigged truss were flown, arranged in 6 ‘fingers’ with a short gap between each one. They followed the diameter of the arch shaped upstage truss onstage.

Each of these sections was loaded with a Clay Paky Sharpie, one PixelLine 1044 LED batten, an Atomic strobe with a colour changer and a Robe LEDBeam 100. These lines of truss had the look and feel of industrial style lighting characteristic of an aircraft hangar, and ensured that all the energy coming offstage could travel right out to the back of the O2 and sweep everyone right up into the action.

Onstage, the band’s full-force oeuvre of performance has always lent itself to heavy back-lighting, and Hurst’s imposing 20 metre upstage arch around the backdrop provided a hangar like architecture plus lighting positions in exactly the right places. 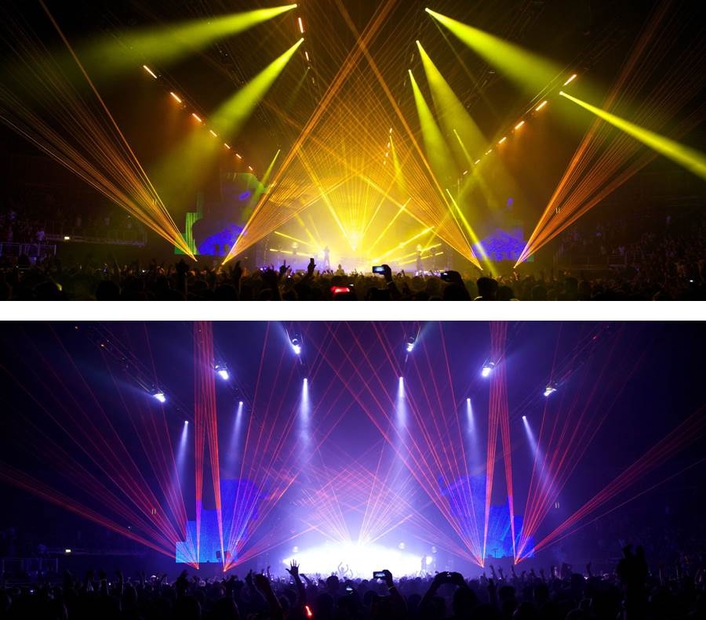 On the arch were batteries of 32 x Robe Pointes and 16 x 2-lite Moles. Hurst used the searingly bright and very dynamic effects capacity of the Pointes to the max, part of a relentless onslaught of lighting mayhem that started as the clock hit midnight and ended with the last chord of the Prodigy’s 90 minute set.

More rear lighting was provided by fixtures rigged on ten vertical trussing towers decreasing in height from the centre outwards each side to continue the arc shape theme. Each tower was topped with a Patten 2013 reflector light and a total of 18 Robe LEDBeam 100s were attached to outriggers on alternative towers, joined by 18 Atomics with colour changers and Sharpies on eight of the ten towers.

On the floor were another 10 x Robe LEDWash 1200s for the backdrop and 25 x Robe LEDWash 600s – the small size proving ideal for squeezing into corners – and 10 Omni floods on floor stands.

Along the front of the stage were another six Atomics with colour changers, 12 Robe LEDWash 600s, and five Chroma-Q Color Force 12 LED bricks were used for band key-lighting – not that they ever stand still for more than a nanosecond!

Ten Color Blocks were focused on the Patten 2013s so Hurst could change the colour of the reflectors, an elegant effect which worked really well even against the cacophony of other lighting and visual activity involved in a Prodigy show!

Video was an integral part of Hurst’s production design, with jagged ‘brick-wall’ hangar style side screens just off the stage for IMAG playback – which is off-beat, idiosyncratic and interesting rather than literal - and all part of the look. 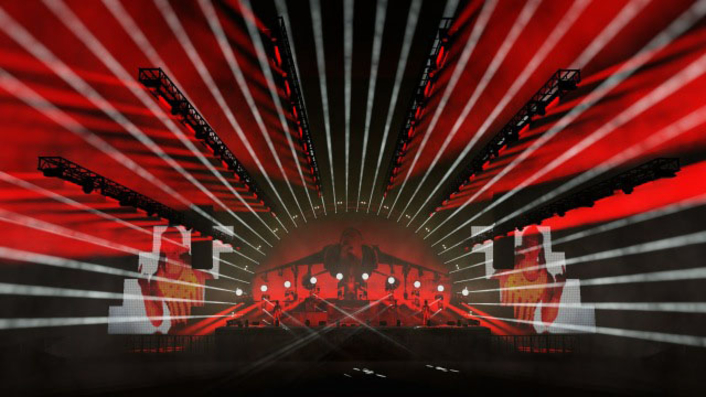 The screens were made up from Martin LC2140 panels also supplied by HSL – the 2 x 1 metre format of the panels lent themselves ideally to the shape which was in keeping with the fragmented video aesthetic favoured by the band. Using the LC panels also meant that Hurst could light through them, highlighting their raw mesh-like appearance as another visual effect in its own right.

Hurst ran all the lighting via a Road Hog Full Boar console. 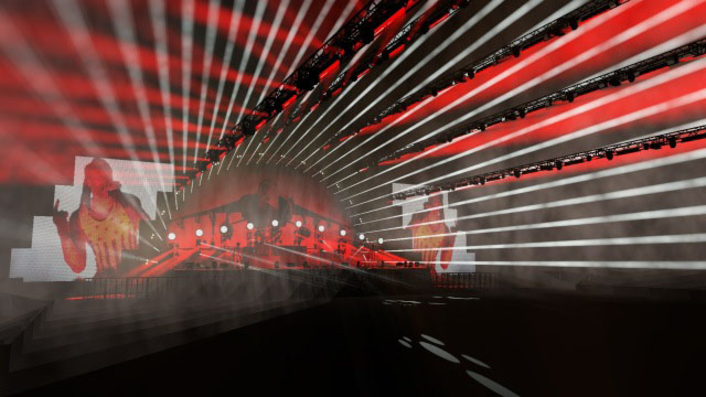 CMT supplied six 20 Watt and one 35 Watt lasers for the midnight roll-over which started with a laser show to a Liam Howlett remix of Ennio Morricone’s classic “Ecstasy of Gold” which segued into the first strike of Big Ben, at which point a 35ft laser projection onto silk stretched across the front of the stage commenced the countdown … and the Prodigy set kicked in.

Sound was supplied by Wigwam, cameras / PPU by Video Illusions and some great teamwork produced an unforgettable night of music and madness to welcome 2014!

Andy Hurst sums up, “It was a massive achievement loading in a show of this scale in one day with no production rehearsals and being ready for soundcheck at 5 pm. Everyone worked extremely hard to make it happen and we had an amazing show”.