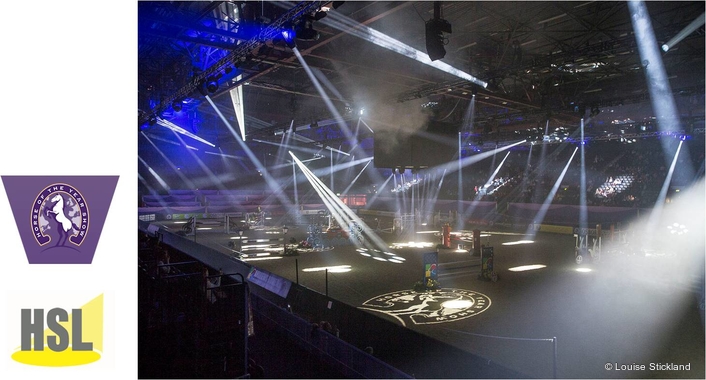 HSL supplied lighting, trussing and rigging equipment to the two main arenas at the 2017 Horse of the Year Show (HOYS) for event producer and artistic director Nadia Raibin and her company, The Production Team.

Nadia and The Production Team have been involved with HOYS for over 20 years, bringing together the best imaginative and technical solutions. Their brief to HSL included providing theatrical lighting for a number of equestrian-based entertainment and display acts as well as lighting for the main international show-jumping competitions, working hunter and driving classes. 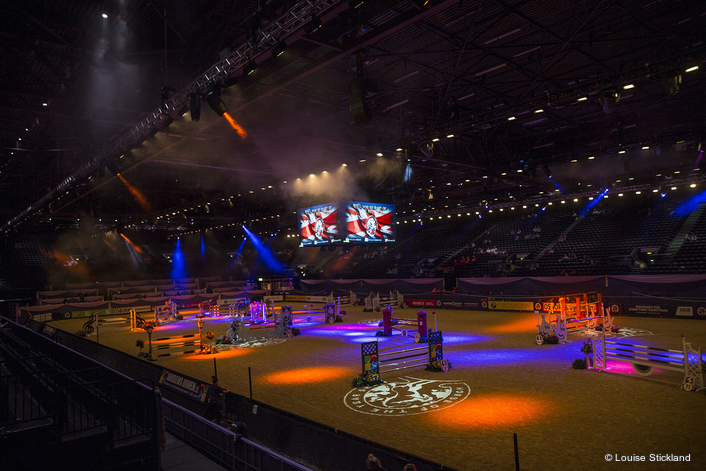 Nadia explained that when she first decided to bring a rock ‘n’ roll atmosphere and ‘entertainment experience’ to the main International Arena – there was some trepidation from the horse fraternity!

“This is the pinnacle of the horsing calendar so the idea of adding a lighting spectacle and specially selected popular music to displays was originally met with some hesitancy! However, thankfully, 20 years on, it’s now as much a part of the overall visitor expectations and show presentation aesthetic as watching some of the finest horses and riders compete at the highest equestrian levels!

Nadia is very proud of how they changed the face of the Horse of the Year Show, and with that, the role of technical suppliers became even more involved and crucial.
On site, the HSL crew collaborated with event technical director Ben Fox and lighting director and operator Mark Strange. 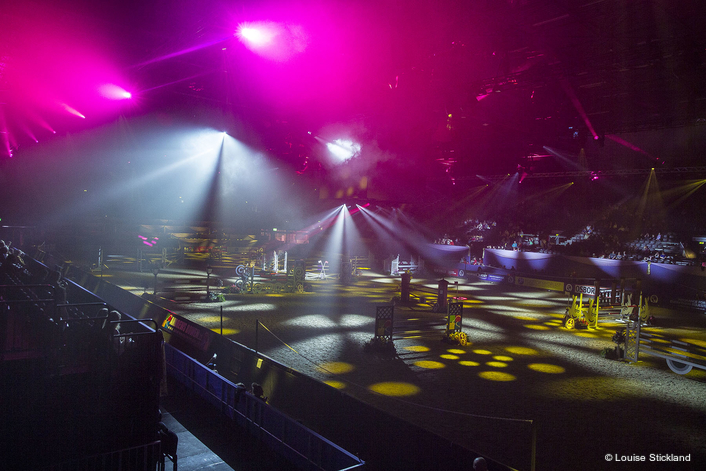 Simon Stuart project managed for HSL, commenting, “It was a pleasure working with Nadia and her very experienced and talented team! We really wanted to up the game this year and ensure that Mark and Ben had the most versatile and creative tools at their disposal to cover multiple demands”.
In addition to all the standard competition events taking place in the main Genting Area, there were a number of dramatic moments where lighting was used to ramp up the excitement and anticipation, plus displays like Atkinson’s Action Horses which were theatrically lit. These were interspersed with craziness from the Prince Philip Cup Pony Club teams and special moments like the winners laps and awards presentations.

Genting Arena
This was a vast 67 metre long by 30 metre wide space filled with lumen-eating special soft fibre material spread across the arena floor, which hosted all the main competitions over five action-packed days of horse-centric sport, fun and entertainment!
Mark Strange has worked on the event for many years and explained that it’s an evolving scenario which demands a degree of improvisation. He will normally only see all the shows that need lighting on the final dress rehearsal … leaving him one fast-and-furious night of programming before it opens the next day … to get everything into the console!

He and Ben Fox, together with Simon this year, were all involved in specifying the lights for which Simon specifically recommended the Vari*Lite 4K beam washes for their output and versatility.
HSL installed hundreds of metres of pre-rigged trusses which were used for all the lighting positions.

A massive effort went into prepping these trusses at HSL, complete with wiring looms that dropped on top in exactly the right places. It was critical that this part of the set-up was completed swiftly, so the arena floor - delivered in a fleet of artics - could be laid immediately afterwards.
A four metre diameter circular truss was also installed in the middle of the space, just below the house video scoreboard. 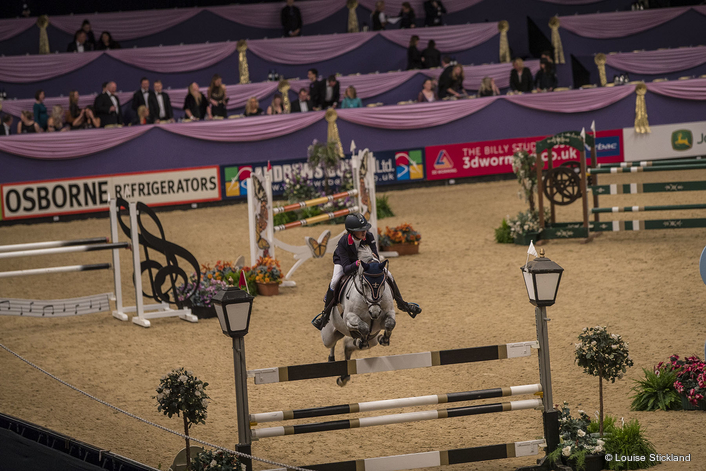 The main moving lights were a combination of Philips Vari*Lite 4K beam washes and Robe BMFL Spots distributed along the length of the trusses, with Philips SL Hydrus 350 hybrids rigged onto the circle truss.
They were all picked for their brightness – to fill the vast space - and hit the high lux levels needed on the arena floor. Reliability was important, as there was limited access to the trusses because of the flooring and the care it needed, so the ideal scenario was not to have to be repair anything! Further to that, the rig needed to be rock solid to minimise the chances of rogue moving lights spooking the horses!

These were joined almost 400 1K floods creating the base look. This dense concentration of point sources produced a nice even shadow-less spread across the sand with no hot spots!
The Genting trusses were rigged on double-braked 1 tonne Litec EXE-Rise hoists which are super quiet and quick! Due to the accuracy of the speed control, these worked perfectly for raising the long trusses really smoothly

Four Robert Juliat Cyrano follow-spots were positioned around the corners of the arena.
Follow spots were used to pick up riders as they entered and exited the ring, and were on hand for the awards presentations, winner laps of honour and some of the display shows. The same follow spot operators have been utilised for some years, so they are familiar with the parameters of highlighting horses as well as providing invaluable continuity for the show crew. 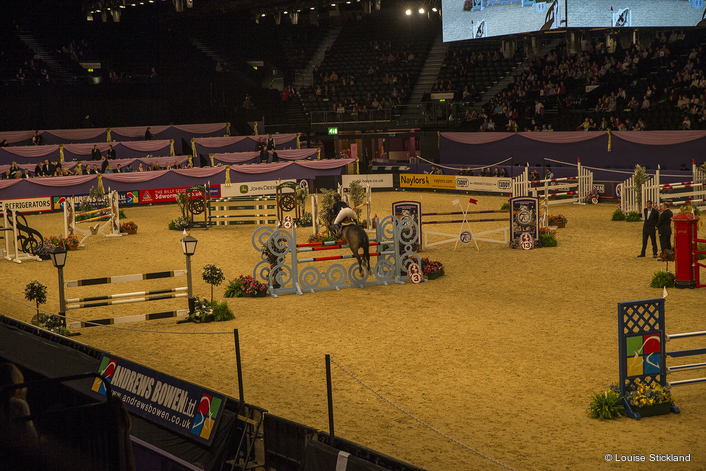 The arenas were both operating for long periods, starting from 5 a.m. when the public were admitted for the first exercise sessions … with the daily event programmes starting at 7 a.m. and continuing through to 11 p.m.
The show was programmed and operated from a ChamSys console with all the dimmer racks and hot racks stored up above in the NEC roof catwalks to keep the space below as clear as possible.

Over the years, Ben and Mark have fine-tuned the lighting of high profile equestrian events like this. Lighting horses is tricky – they don’t like shadows and need to see where they are stepping  ... so massive contrasts like bright spotlights and pockets of darkness have to be avoided, yet the environment also needs to be moody and dramatic at times.
It also has to be lit for recording and video / internet streaming

Another challenge this year was working with a completely new rig. While HSL was involved in a rental supply capacity in 2016, this year they took on the full lighting production role. Mark and Ben particularly enjoyed having the BMFLs this year.
Another added bonus was that moving lights were used to spot the correct positions of cones for the upcoming driving classes and jumps for the next show-jumping sessions, allowing the floor teams to mark out the arenas extremely quickly, speeding up the changeovers. 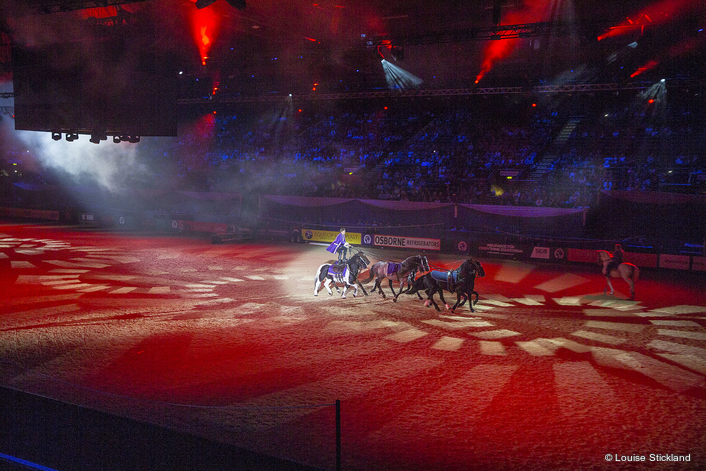 In the “Top Spec” Arena 2, lighting was a lot more straightforward. A proliferation of in-hand showing and breed classes took place here, lit with super-wide PAR 64s on 6-lamp bars rigged on individual trusses flown in a U shape. A series of 400W MBI floods were supplied for the collecting ring area
A long truss was hung above the main entranceway, populated with Philips LED Spot 300s projecting Horse of The Year Show custom gobos, combined with SL 350 LED washes providing the event’s signature purple wash.

Hazers and smoke machines were used to help ramp up the atmosphere for the theatrical lighting moments, a task that took a little while to master but proved well worth the effort.
Andy and Charlotte worked with 12 local crew on the in and out, and both organisers and the venue commented that it was great to have all the lighting and rigging coming from one company.
Being fresh to the event enabled HSL to bring new ideas and vitality to the table. It was a totally different show environment to a standard stage setup, but everyone soon settled into their stride.

Ben Fox comments, “The whole HSL experience was excellent! The crew were all great, nice personalities and they worked quickly and efficiently; the kit proved to be perfect for the application and really gave us so many more options and scope to produce imaginative shows that were really appreciated by our audiences”.
Nadia sums up, “I am only ever as good as the people I work with, so choosing the right dedicated professionals for this event is always key. They need to be the best in the business and passionate about what they do. 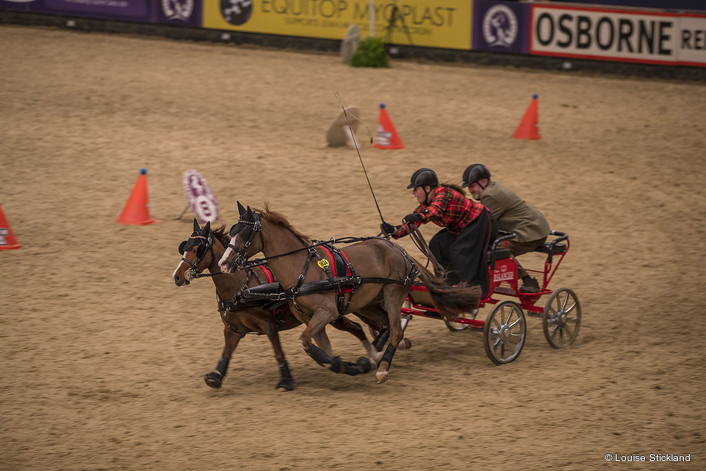 It has been an amazing experience with HSL adding their expertise, flair and dedication to the mix and making the 2017 Horse of the Year Show so memorable The standard and variety of the lighting equipment has been superb and the get in and rigging seamless.  Simon and his team are brilliant to work with and I can’t wait to do it all again next year.”

HSL
The Horse of the Year Show