How Adlib Helped make it Sound Beautiful for Florence

Florence Welch and some of her adoring fans

Undisputedly one of the most popular and critically acclaimed ‘indie’ artists of the moment, Florence + the Machine has enjoyed a phenomenal year with numerous highlights including her new album “How Big, How Blue, How Beautiful” topping the charts in the UK and US and a show-stopping headline set on Glastonbury’s Pyramid Stage.

Adlib provided a large and innovatively designed ‘racks-and-stacks’ audio package for the recent UK leg of the current world tour. Adlib has a long history with New York based Firehouse Productions, providing stacks and racks in UK & Europe on world tours supported by them. One such tour was Radiohead in 2012 with FOH engineer Jim Warren who now works with Florence. Narci Martinez (RHCP & Josh Groban production manager) is at the helm, pulling this fantastic production together, as the tour’s production manager.

Marco (Marc Olivier Germain) is the systems engineer for the world tour and in collaboration with Jim, took the opportunity of implementing some new, interesting and different ideas to optimise Florence’s very unique sound.

Adlib’s crew was headed up by senior systems engineer Tony Szabo KSE, with Sam Proctor as second PA Technician and James Petch as stage technician. Tony and the Adlib team worked closely with Marco to ensure that all Jim Warren’s requirements were met. At the stage end of the arena we find Ross Anderson supporting and coordinating all things stage audio and RF for monitor engineer Jon Ormisher.

Tony has previously worked alongside Jim, Ross and Marco and commented that it was great to be back working with the touring family again.

A substantial L-Acoustics system was provided by Adlib, with the main PA hangs comprising 12 x K1 speakers per side each with 6 x K2 downs … a combination adopted after Jim & Marco had good results with this format over the summer festival season and wanted to try it in arenas.

Another slightly unorthodox approach was in flying three 8 deep arrays of K1-SB subs – one either side of the main hangs, plus a centre cluster to even out the sub coverage.

Their standard side hangs were 12 of the versatile L-Acoustics K2s per side. 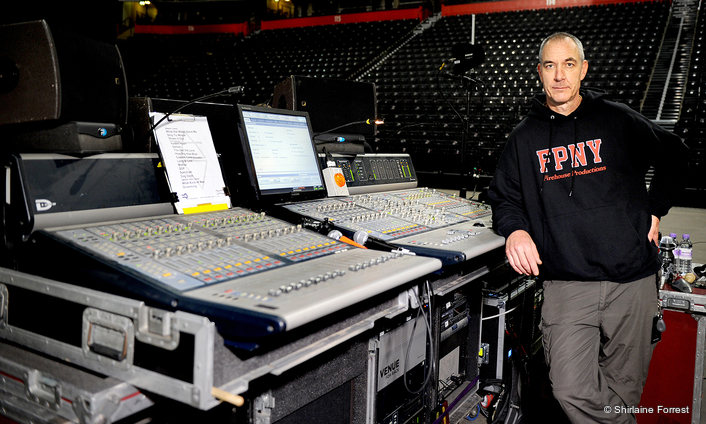 On the ground, the SB28 subs were arranged in an end-fire format comprising a row of two high and three wide with an identical row directly behind and all set up with critical spacing.

A special formula involving time alignment and phasing made this sub layout extremely directional and functioning far more efficiently than a cardiod system, dramatically reducing the sub frequencies behind the array!

For front fills, they used a selection of ARC2 and KARA enclosures and LA8 amplifiers drove the entire system. 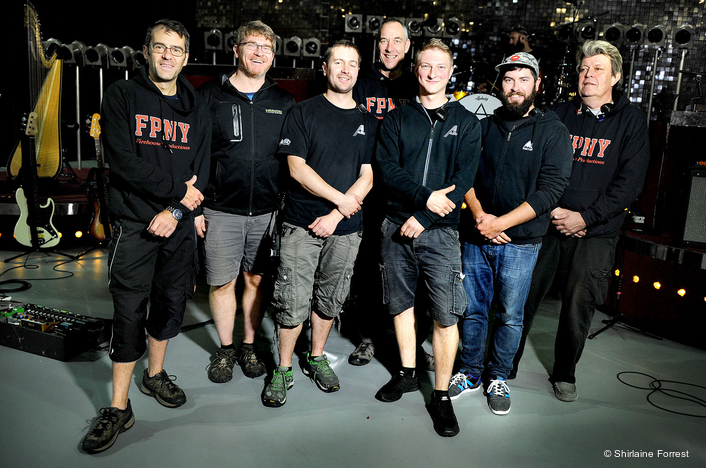 Marco tours his own spec Firehouse control rack, so Adlib modified their Lake Dante Fibre system to incorporate Focurite D16R RedNet Dante interfaces at FOH to take AES from the control rack to stage using Dante where it was distributed as AES in to the LA8 amplifiers all running at 96k. 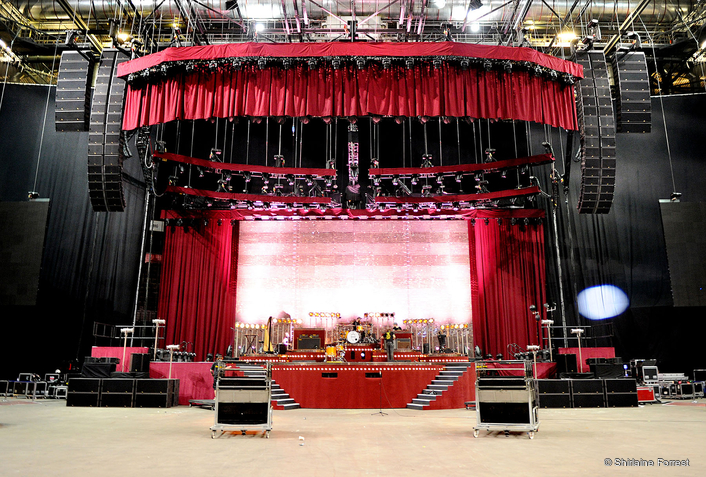 The set-up in Manchester Arena

Client Manager Phil Kielty commented, “It has been a real privilege to watch a true artist such as Florence, on top of her game in the live arena. We have been lucky to work with Jim Warren on a Radiohead Tour and he really is a great engineer.  Narci Martinez and all of his team have put together a stunning production and Marco, Jon, Ross, Jake & everyone involved was so welcoming to us. We look forward to the European Leg and working with everyone again.”

The tour goes to the U.S. and Australia before returning to Europe for the end of the year

Adlib Enjoys a Summer Full of Festivals
Adlib Enjoys 5 Seconds of Summer!
ADLIB Gets on a High with All Time Low

Florence and the Machine
Adlib