Hooray for Hollywood and DiGiCo 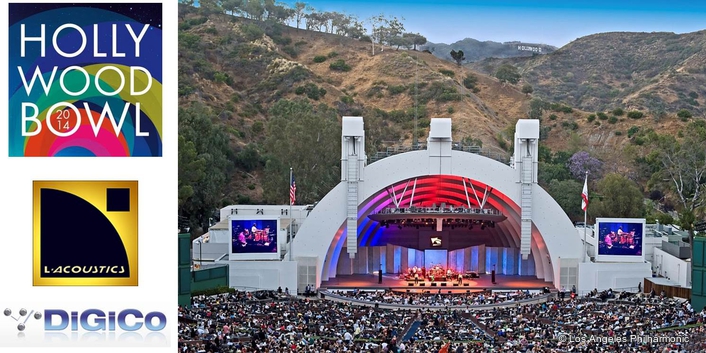 Twin SD7 desks reinforce the stars under the stars at the famed Hollywood Bowl
The Hollywood Bowl purchased a pair of DiGiCo SD7 digital mixing consoles – one for front-of-house, one for monitors – for its busy 2014 summer series of concerts, which came to a close in late September, enabling production staff to upgrade the operation of the installed PA system to 96 kHz resolution. This year’s 15-week summer series, anchored by the Los Angeles Philharmonic, featured performances by major artists from all genres of music, including Gloria Estefan, Yo-Yo Ma, Elvis Costello, Herbie Hancock, Robyn, Steve Martin and a host of others.

The iconic 18,000-seat Hollywood Bowl may have been named Pollstar’s best major outdoor concert venue for an unprecedented tenth consecutive year in early 2014, but the team behind its audio technology is not content to rest on its laurels. According to Paul Geller, production director at the Hollywood Bowl for more than three decades, the PA system sounded great at 48 kHz. “But when you hear it at 96k, there are certain subtle differences that you pick up, such as the dynamic range of the highs and lows. It also produces a very natural acoustic sound. It’s a great marriage between the DiGiCo console and the L-ACOUSTICS loudspeaker system.”

Vogler reports that the DiGiCo desks can comfortably handle even the largest productions. “We’re at 96k with 160-something inputs and it still sounds as pristine as with two channels. I think that a big part of the resolution we’re getting is the front end of that console. It’s got a lot of high quality mic pres, signal paths and processing. It’s wonderful to have that kind of front end and feed it out of an L-ACOUSTICS speaker system on the back end.” 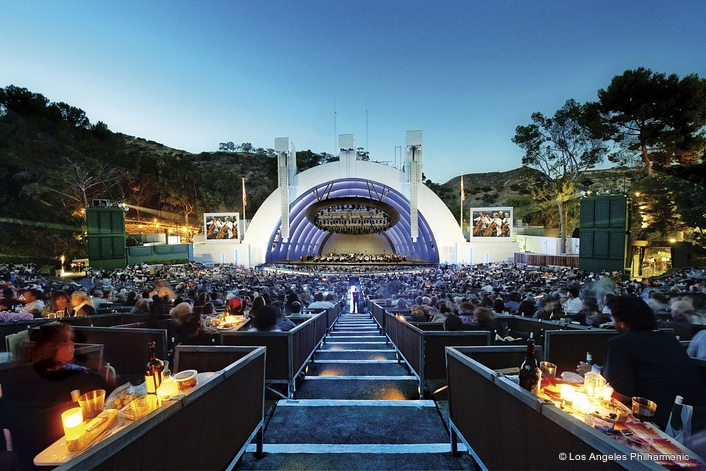 Vogler addresses the zoned speaker system via the SD7’s matrix outputs, separately feeding the main left/right hangs, including flown subwoofers, down fill and front fill speakers, subs and mid-high boxes on the deck, plus various audience fill speakers. On the input side, says Vogler, he typically creates groups. “I’ll have a string group, woodwinds, percussion, horns or brass, lead vocals or solo instrument group, a band group and an effects group. I like the conductor or the notes on the page to do the balancing. It doesn’t mean that my mix is static, but I don’t get too heavy-handed with moving things up or down.”

The booth at front of house is well equipped with several different outboard high-end reverb systems, but Vogler also makes use of the many DiGiCo effects processers. “I use the tap delays and some of the onboard reverbs,” he reports. The Hollywood Bowl shell interacts with instruments on the stage, so for orchestral performances, “only a sparing amount of reverb is required,” he says. “I’ll pick one based on the piece of music or the need of a particular instrument.”

There is one DiGiCo feature that Vogler favors on vocals, the DiGiTuBe, he says: “I really like the tube emulation; I like the warmth that it adds, especially if you have a vocalist that’s a little on the harder sounding side, or someone who tends to scream more. It definitely rounds out that impact and makes it a little warmer and more engaging.”

He continues, “I also love the Dynamic EQ, where you can take a frequency band and put it into a compressor and apply it to every channel. You don’t have to take all the frequencies; you can just compress a band of frequencies. That’s a very handy feature.”

The two SD7s are on a single Optocore loop, with all of the DiGiCo DSP located on stage. “If I can’t see a conductor well and I need specific cues, I put the conductor cam on the console’s meterbridge screen. If I’m really bored I’ll put the monitor mixer on there!” laughs Vogler.

The two SD7s are on a single Optocore loop, with all of the DiGiCo DSP located on stage. “If I can’t see a conductor well and I need specific cues, I put the conductor cam on the console’s meterbridge screen. If I’m really bored I’ll put the monitor mixer on there!” laughs Vogler. 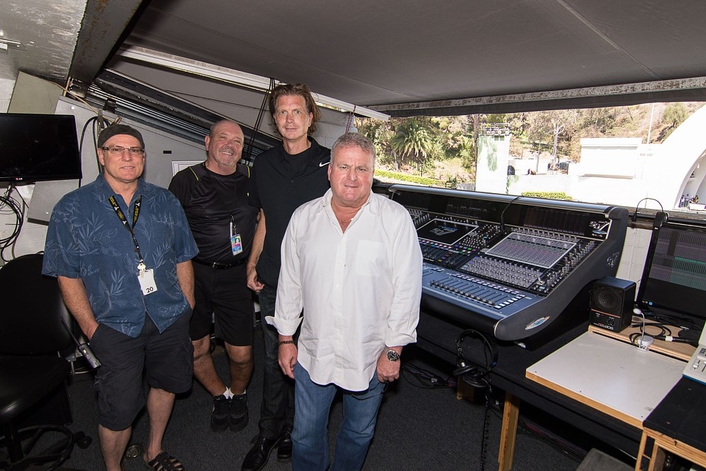 The venue’s summer series is non-stop, featuring almost daily concerts by the LA Phil, the Hollywood Bowl Orchestra, numerous guest performers and lease events – that is, concerts organized by third party promoters. “Because we’re doing one-offs we get one rehearsal, so there’s not a lot of time to fool around,” says Vogler. “We have several console templates that Shep has organized: orchestra, orchestra loud, jazz and rock. We have the basic EQs and onboard as well as external processing figured out for each particular type of presentation or program. Mike puts those together, labels the boards and organizes the session templates.”

The SD7 offers so much power and so many features that Vogler is still getting to grips with every facet of its operation. “It’s a very sophisticated board. I have a lot of flexibility in the way I can assign things or move things. I always chuckle when people ask me if I know what all the knobs and buttons do. I have to tell, them, no, but I’m working on it. I like the fact that I don’t know what every knob and button does. I’m still learning new things to do with it. It keeps me on my toes; I’m not bored using it. We’ve been very happy with it – and I’m eager to learn more.”

About DiGiCo
DiGiCo is a UK-based manufacturer of some of the world’s most popular, successful and groundbreaking digital mixing consoles for the live, theatre, broadcast and post production industries and is exclusively distributed in the U.S. by Group One Ltd. of Farmingdale, New York.