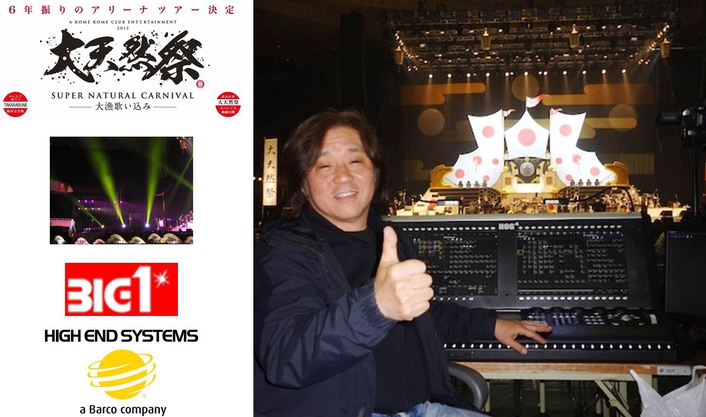 Makoto Shimizu from Lighting Big1 is the tour's lighting designer. Makoto witnessed the unveiling of the Hog 4 at the LDI 2012 exhibition, and was eager to specify the console for the Kome Kome Club tour. He comments, "I’d been eagerly waiting for the release of the Hog 4. There had been rumors for some time, although I tried not to get my hopes up based on rumors. Initially, I planned on using a different console; I'd been using the Full Boar forever, and it was about time to try something new. And that was when the Hog 4 came out - I was confident that the learning curve would be much faster on the Hog 4, so I figured it’s best to stick to what I know!"

Shimizu gives high praise to the console's speed and power. "The quick response time makes a huge difference. That was also my impression when I moved from the Wholehog 3 to the Road Hog Full Boar—that it was quicker. And now with the move to the Hog 4, it feels as if everything has sped up even more. Start up is very quick, and logging off and logging back on isn’t a bother at all."

The designer describes the operational transition to the new Hog 4 console platform as effortless. "It was absolutely smooth," says Makoto. "You see, I’d never used the Hog 2, but after I’d learned to use the Hog 3, the company ran short of those consoles. I did one tour with the Hog 2, and that took some getting used to. So compared to that experience, the transition from Hog 3 to Hog 4 was really easy."

He adds, "After having used the Wholehog 3 for so long, when I started with the Full Boar, I couldn’t get used to the omission of encoders [Intensity and Rate wheels] at first. I also missed the View and Toolbar buttons, and it took some time to get used to touching the display. So for me, the Hog 4’s hard buttons are a welcome revival. The touchscreens are easy on the eye, and I'm so happy with their response. Sensitivity has definitely improved with the Hog 4. I like the bigger screens, but I’m not yet comfortable programming in the middle of the console. So for the moment, I roll over to the right side for programming, and to the left side during the show."

Makoto also specified High End's DL.3 and SHOWGUNs for the Kome Kome Club tour. "Since the SHOWGUNs are large fixtures," says Makoto, "I wanted to use them in strategic points of the stage. The SHOWGUN produces a mixture of the LED ring and beams, so yes, I use it. No other fixture can give you that combined effect. With the DL.3, I initially envisioned projecting images from behind the wings of Japanese flags in the backdrop. But there were too many spars to get a clean projection, so I settled for the center point only."

The DL.3 projects images from behind the semi-circle sphere at stage center. The LD's backup plan for center stage was to use an automated light. "I could have used a moving light to project the band logo or other gobo, or perhaps change the color - but that would be boring. The images were better, hence the DL. With Kome Kome Club, the point was to not get too creative with the images."

In closing, the designer reflects on his first experience with High End Systems' new flagship console. "The Hog 4's quick response time takes the stress out of programming. Even a second of delay can cause some stress. The console is a good buy and has a lot of potential. I see it opening new horizons for lighting designers. But the best thing for me is the response time. You never have to press a button and then wait. The Hog 4 doesn’t interrupt your workflow; that’s the biggest advantage."