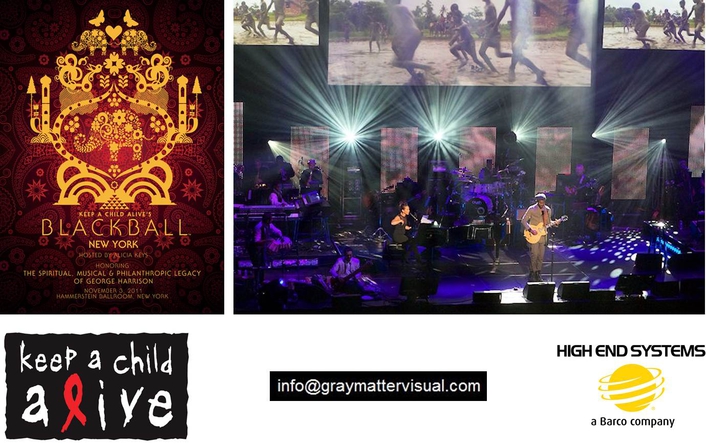 LD Brendan Gray of Gray Matter Visual returned for his fourth year designing the lighting and media content for the Nov. 3 event, held at the Hammerstein Ballroom in New York. Scharff Weisberg Lighting was the vendor.

The 6 HES intellaspot fixtures were positioned on the deck behind the band in between the 7 LED panels.

“I was interested in using the intellaspots after seeing them a few weeks earlier at an HES Open House in New York City. Craig Burross and Chris McMeen were helpful in getting the fixtures to me to try out,” Gray explained.

Gray was intrigued by the 850W source, which he was told had the comparable output of 1200W fixtures. So he put them to the test in the rig.

“The intellaspots did exactly what I wanted them to do, and more,” Gray said. “The large aperture and defined beam made a huge statement behind the band. I had been skeptical about the real-world output of an 850W source but the big beams threw to the back of the balcony and stayed bright.  The output blew away the other 1200W spot fixtures in the rig, and I was impressed with how bright the fixtures were, even with layers of effects loaded up.”

He continued, “I needed a system of lights on the deck that could hold up to the brightness of the projection and LED video and make some really big looks. The intellaspots delivered.”

The music and media content reflected the foundation’s recent inroads into India this year, with a special honor given to The Beatles’ late guitarist George Harrison for his philanthropic commitments to India and his 1971 concert for Bangladesh. Alicia Keys is the global ambassador of the charity and each year, she performs with her band and special musicians. This year’s musical lineup with Keys included Midival Punditz, Gary Clark Jr., Jay Sean, Richie Sambora, Norah Jones, Usher and Will.i.am of the Black Eyed Peas.