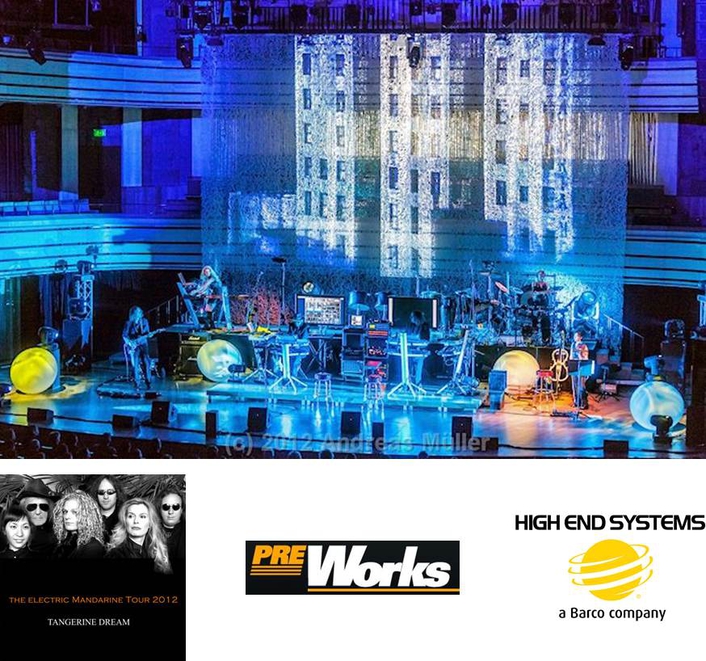 .
High End Systems, a Barco company, products play an instrumental role in Tangerine Dream’s spring/summer “Electric Mandarine Tour 2012.” The German electronic music group, founded in 1967, has become internationally known not only for their mind-entrancing music concerts but also for their film soundtracks for Risky Business, Firestarter, Sorcerer, Near Dark, Legend and others.

The DL.3 Digital Lights, which feature an on-board media server, allow Video Designer Michael Koschorreck to use his custom content in HD quality. “Incredibly, it was my first experience with Digital Lights from High End Systems,” he said. “The light output and quality of the images matched my imagination, and the real time access to all parameters - all I can say is wow. We placed the DL.3s on the road cases left and right side of the band; it was so easy!”

LD Fink points out that the DL.3’s Collage Generator feature - which allows the seamless merging of multiple DL.3 units to project one panoramic image - is “the simplest” way to quickly manage displays across big screens using more than one projector. They mostly used a projection size of 12 x 5 meters (39 ft by 16.4 ft) to enhance the music using non-specific images, concentrating on movement and textures.

“The HD SDI input is also really great for using custom content which can be produced in real time,” Fink adds. “So we had saved time with the quick set up possibilities and didn’t lose any of our creative time to work with all the other features.”

Fink was also able to create intensive looks with the SHOWGUN 2.5s (spot luminaire) and SHOWBEAM 2.5s (wash luminaire), using them as back lights - even in performance venues which allowed no smoke or haze. Both fixtures offer the innovative LED tracking system ring around their lenses,  allowing the designer to use them together with the exiting beam or alone as an LED wash and effect light.

“The mix between SHOWGUN 2.5 and SHOWBEAM 2.5 gives the possibility of playing with different beam sizes and splitting beam looks. The LED tracking system makes the fixtures unique,” Fink says.He chooses the Road Hog Full Boar on this and past tours, describing it as the console that gives him “the power and intuitive handling” of current Wholehog OS. 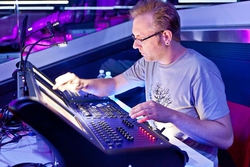 Preworks’ Andreas Reinbacher praises Andreas Fink’s quality work created with using the HES Digital Lights in combination with the Wholehog consoles, saying it is a perfect pairing of skill and equipment.

Tangerine Dream’s European tour ended May 10, with their next leg starting June 24 in London. The group then heads to North America June 30 and runs through the U.S. in summer.