Here Lies Love Stands Up and Gets Down with DiGiCo SD10T 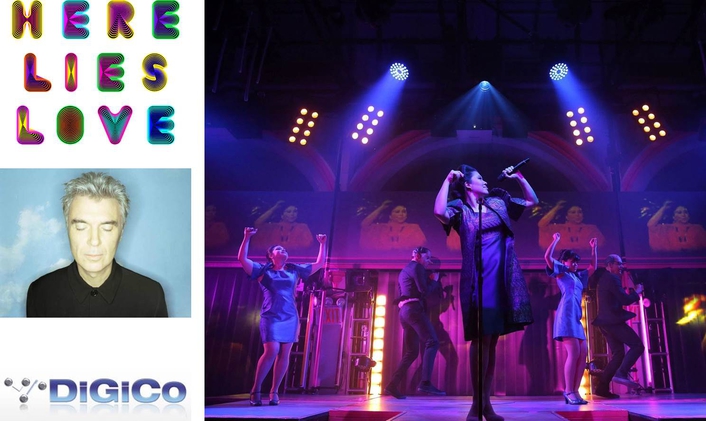 The production is ambitious. Set within a dance-club atmosphere, theatergoers stand and move with the actors for the duration of the show as Imelda Marcos’ journey is told in song with lyrics by Talking Heads founder David Byrne and music by both Byrne and Norman Cook, aka DJ Fatboy Slim. For all its magnificence as a theatrical production, Here Lies Love was born as a music recording with performances by artists including Cyndi Lauper, Tori Amos and Allison Moorer, and the music propels the narrative as the cast moves from one end of the theater to the other, with dozens of loudspeakers in a complex sound system design keeping the audio in phase and in focus. 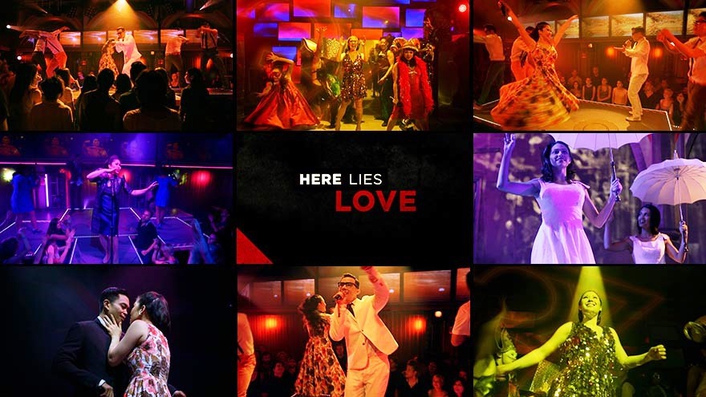 Holding it all together are the signal management capabilities and sonic quality of the DiGiCo SD10T – the “SD Ten Theatre” – a digital console developed specifically for intricate theatrical applications. Supplied by Masque Sound, the console is one of three new SD10T desks recently purchased by the East Rutherford, New Jersey-based theatrical technology vendor – the other two being used on Barry Manilow and Bruce Sussman’s Harmony in L.A. and the touring production of the ABBA-soundtracked musical Mamma Mia! 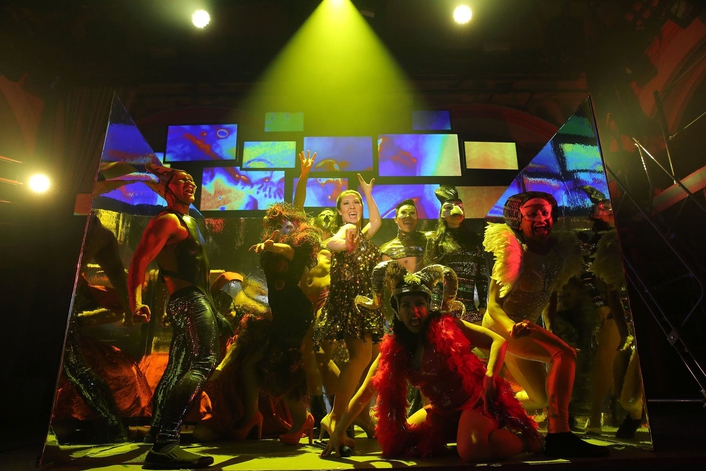 “This is really an incredible production, visually,” says Cody Spencer, who serves as co-sound designer, along with M.L Dogg, for Here Lies Love. “But the sound is every bit as amazing.” Spencer describes a multi-speaker sound system that spotlights sound around the performance space, keeping it with actors as they move from stages at either end of the room, yet evenly distributed across the audience. The audio is comprised of music stems used as backing for the vocals (taken from the original album that was pre-mixed by Fatboy Slim) and some vivid sound effects that inject nearly 110dB of realism into the show, including an imagined version of the helicopter that whisked Marcos and her husband away from the Philippine capital as their reign came crashing down. 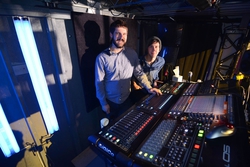 Managing this much audio and doing it with reliability and unmatched sound quality is what the DiGiCo SD10T excels at. Working in conjunction with QLab 3 live show control software and DiGiCo’s UB MADI USB-to-MADI converter, which can add up to 48 channels of MADI-format digital I/O to a Mac or PC via USB, the SD10T allows Spencer to insert time delay functionality within the crosspoint matrix of the console’s router. This essentially lets the sound system be constantly adapted to the show’s performance as the actors change position through the space but without changing the overall level of the system.


DiGiCo SD10T at Here Lies Love / Add One
“Imagine standing directly between two speakers in a room that are at the same volume, and you add delay to one speaker,” Spencer says, explaining the Precedence or Haas Effect. “The speaker without the delay is perceived as being louder even through the volume level on both speakers remains the same. Imagine that taking place across dozens of speakers as actors are moving all over the space, but you have the ability to add delay exactly where and when you need it. That’s what the SD10T brings to this show. The versatility and flexibility of the console’s matrix is the main reason we chose it. I can’t think of another console that has that kind of capability without having to use external processing.”

Spencer further says that the show’s FOH mixer, Craig Freeman, takes advantage of the SD10T’s ability to move any of its metering to its large overview screens. Due to the nature of the production, Freeman has to mix the show from what would be the monitor position in any other theater in order to keep track of levels visually. Onboard processing includes 16 Dynamic EQ processors, all of which can be assigned to any of the input or output channels, plus 16 assignable multiband compressors and 16 assignable DiGiTuBes, DiGiCo’s tube emulation software, which Spencer says has become critical to the show’s sound quality, taking the edge off the brightness of the AIFF files the music tracks use. “DiGiTuBes really warms the tracks up,” he says.

Spencer, who has worked with renowned Broadway sound designer Brian Ronan on hit shows such as American Idiot, Beautiful and The Book of Mormon, says the DiGiCo SD10T console offered him an unprecedented level of control even as it provided exceptional sound quality. “I also have to credit Zac Jac Duax at Group One [DiGiCo’s U.S. distributor] for his help. He really got us comfortable with the console quickly. DiGiCo brought us a great console with excellent support. That’s what you want behind you on opening night and every night.”

About DiGiCo
DiGiCo is a UK-based manufacturer of some of the world’s most popular, successful and ground-breaking digital mixing consoles for the live, theatre, broadcast and post production industries and is exclusively distributed in the U.S. by Group One Ltd. of Farmingdale, New York.