International creative design practice Painting with Light was commissioned by Panasonic to produce a high-impact multimedia live show for their stand at the 2017 ISE (Integrated Systems Europe) expo at Amsterdam RAI. Painting with Light’s creative director Luc Peumans initiated the idea of simultaneous tracking and projecting onto multiple objects. It was a mission for which no-one could calculate a potential success rate in the confined and frenetic space of an exhibition booth.

Panasonic’s Hartmut Kulessa and Thomas Vertommen, both in charge of the Visual Systems Marketing, first asked the question which fired Luc’s love for creative risk and experimentation … setting a trail of events in motion!

“Luc’s vision and determination plus the unwavering support from Hartmut and Thomas were real driving forces,” confirms Michael Al Far, Painting with Light’s video content producer who was right at the hub of the action.

Luc's concept for the show was that any sufficiently advanced technology is indistinguishable from magic. 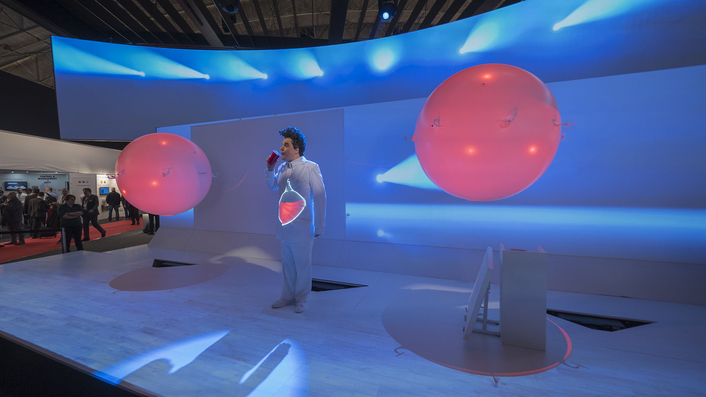 His hand-picked team included Michael as the visual designer and Painting with Light's project manager Wouter Verhulst - who worked on delivering this exciting and exacting collaboration which produced stunning results that illustrated the power and versatility of the new super high brightness Panasonic PT-RZ31 31,000 lumen laser projector and the newly launched PT-RZ21 laser projector with 20,000 lumens.

Painting with Light worked closely with Airstage from Germany who provided two 1.2 metre diameter helium filled remote-controlled flying orbs, which were also part of the show.

Show director Frank de Wulf was brought onboard to storyboard and co-ordinate the show – working to a brief that included entertaining visual trickery – delivered by illusionist Raphael - whose five minute performance was choreographed to illustrate a number of projection techniques and gags!

The aim, explained Michael, was to demonstrate the “precision, detail and clarity of the projection in a challenging live situation” working in the context of the environment and also illustrate a number of symbiotic technologies in a fun and engaging way.

The orbs were fitted with gyroscopic propellers. Piloted manually, they had to remain within the projection field and could move and rotate on multiple axes.

The event stage was custom designed and built to fit into one corner of the large stand. A huge curved screen graced the top of the performance space, complimented with a straight back wall and then the floor which was also a projection surface.

Painting with Light specified a BlackTrax real-time motion tracking system and a d3 media server to be at the heart of the control system.

The orbs and the illusionist were fitted with BlackTrax beacons and the associated cameras were positioned on the trussing above the stand. A moving panel made from screen material which moved in and out at different times was also tracked and mapped for the show. This was actually handled by the magician … due to the tracking, he had the freedom to move the panel about in time and space without it losing content. 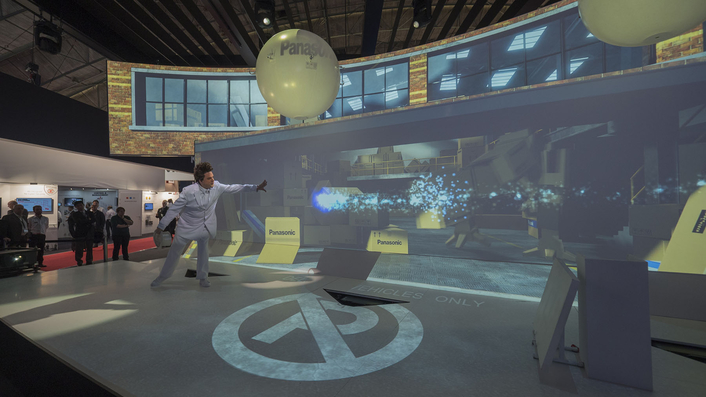 The positional data generated by BlackTrax in following the orbs, the magician and the panel was fed into the d3 and used to map the video content onto three dimensional rigid bodies. These were then projected onto the actual real life physical structures resulting in pinpoint accuracy with the content projection.

Video content was designed by Marco de Ruyck and Katleen Selleslagh was the d3 programmer and stage manager for the four show days.

Eight Robe DL7S Profile moving light fixtures were also linked to the BlackTrax positional data, programmed by Painting with Light’s Niels Huybrechts, and the show was timecoded triggered to play every hour on the hour.

Airstage, BlackTrax and d3 were active partners with Painting with Light on the project, and each deployed a product specialist – John Barker from Airstage, Andrew Gordon and Marty Cochrane from BlackTrax and Vincent Steenhoek from d3 - to assist in delivering this exciting and unique challenge.

“It was a complicated show to calibrate and get the mapping just right and we took on a few risks in the process” emphasizes Michael, ‘so having a team with the right skill sets and synergies was essential to produce a great result for their client.

Luc, Wouter and Michael first encountered Airstage at the EAS convention in Barcelona and hoped that they would get the chance at some stage to project on these featherweight structures, so when the call came from Panasonic … that part of the integration jigsaw was ignited!

Michael further explains that it was a challenge fitting the BT beacons into the Orbs without disturbing the floatability balance and weight. A test was set-up at Airstage in Stuttgart where all parties involved convened … and only after that test day was the decision taken to proceed with the mission. 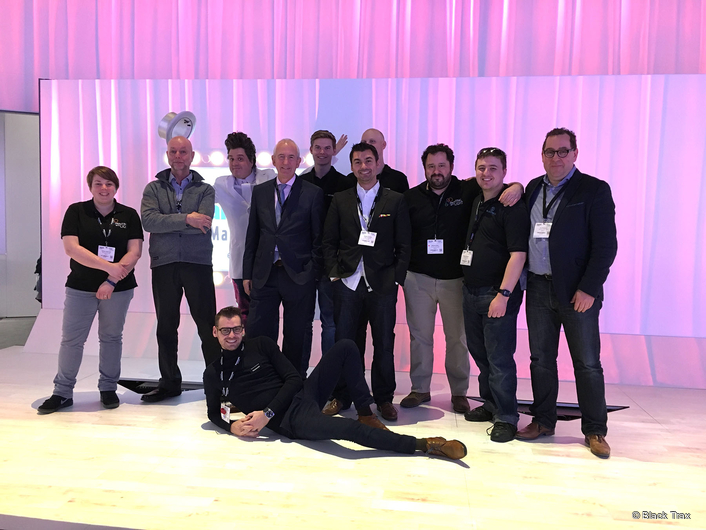 A complete mock-up and trial run of the full show took place the week before the expo at Painting with Light’s studio in Genk. Backstage Academy from the UK was invited to provide ‘filler’ video content to run for the 55 minutes between each live projection show.

As news spread quickly around the various ISE expo halls, people came flocking to the stand to enjoy the experience in the process generating more interest both on the ground and show floor as well as across social media channels.

The Panasonic Show at ISE 2017