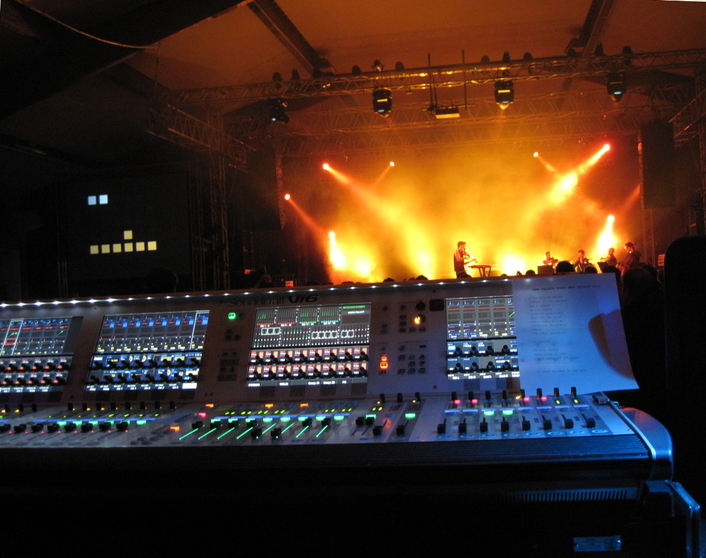 With a multiple-act show occupying three stages the Vi6 was running up to 96 channels
The Donaufestival is an Austrian festival of music and performance that takes place each April on the River Danube in Krems, in the state of Lower Austria. Promoted by the NOE Festival-Ges for the past two decades, the festival showcases a wide range of artistry — from avant-garde rock, performance art and electronica.

This year for the first time the production brought in the Soundworx team of audio engineers, with Klaus Hübner on monitors, and Michael Schmidt given the task of piloting the house mix through a Soundcraft Vi6 — supplied by Redline Enterprise — over two weekends.The FOH engineer, who had specifically requested the Vi6 after being introduced to the desk at the Prolight+Sound Show in Frankfurt, was gratified that so many visiting artists’ sound engineers also specified the desk on their riders.

With a multiple-act show occupying three stages — including a gothic church, as well as several small locations spread throughout the town — the Vi6, running up to 96 channels, was configured with two MADI cards in the local rack for additional connectivity. The OB Van (containing a Studer Vista 8) also received signals from an active analogue split onstage — a stereo sum and FX sum from the Vi Stagebox (configured 64 in / 32 out).

Although Michael Schmidt has worked the festival for several years as a sound tech, this was his first outing in charge of the house mix — and he stressed the importance of having a high-calibre sound engineer down in Monitor City. “A very important aspect with ‘hot’ inputs — with a high tendency to generate feedback — is that you can rely on each other,” he said.

“Many bands came with their own sound engineers, but I had the fortune to mix some on my own, like the Irrepressibles, Lydia Lunch, Gonjasufi, Laurie Anderson and others.” The Wild Beasts’ engineer came with a show file created on a Soundcraft’s Vi1 and John Cale’s technician brought a session that was created on Soundcraft’s Offline Editor.” The number of inputs varied from 48 (in the case of John Cale) down to just three for Laurie Anderson.

Michael Schmidt says it never took him longer than five minutes to familiarise new Vi6 users with the environment. “As a general rule I create a specific user layer the way the band engineer wants it  — that makes life much easier, especially for an engineer with no Vi experience. “I remember the old analogue days at festivals with up to nine bands per day, where you had to convince a lot of band engineers to go for a generic patch,” he continued. “Now it is a real pleasure to offer them a 1:1 patch to the band’s input list.”

While some bands had ordered an analogue graphic EQ, they did not use it once they had tested the board’s dynamics. “I had even considered using my own tube preamps, and was happy afterwards I did not have to carry this extra weight back home again. Definitely a good time now to sell them!” However, some engineers used an interesting mix of both external and inline FX. “For instance the Irrepressibles had their own FX engineer who received several sends from the local rack into his FX rack, and returned a sum to my band mix. I used the internal FX for backing vocals, drums, strings, wind instruments, acoustic guitar and vibraphone!”

The Soundworx man found himself using all the desk’s internal dynamics, — Gates, De-essers, Compressors and even Limiters (for bands with less stage experience).  “The original Laurie Anderson input list comprised more input channels than she sent me from stage in the end, so I had to deal with a stereo sum including all her vocals, violin, vocal effects and additional effects — which made it a little difficult in terms of feedback suppression and using additional reverb.”

Summarising the console’s attributes, he pointed to the obvious sonic quality and ease of use — and the fact that it provided the best overview (with all dynamics, inputs and outputs at a glance). “Other plus points were the Lexicon FX, the compact dimensions and the fact there is no more layer confusion — thanks to FaderGlow™. Also, two engineers can work on the desk at the same time (via the fourth flexible input bay).”

Michael Schmidt remains unequivocal that the Vi6 is his favourite desk. “I have been using Vi6’s now for two years — but only for monitor purposes until now,” he summarised. “This was my first opportunity to get in deep at FOH, and it did not take more than an hour to establish my basic festival set-up and answer all relevant questions to myself due to the self explanatory surface and software. “In fact this festival reinforced the decision that Soundworx will definitely invest in a Vi Series console during 2011!”