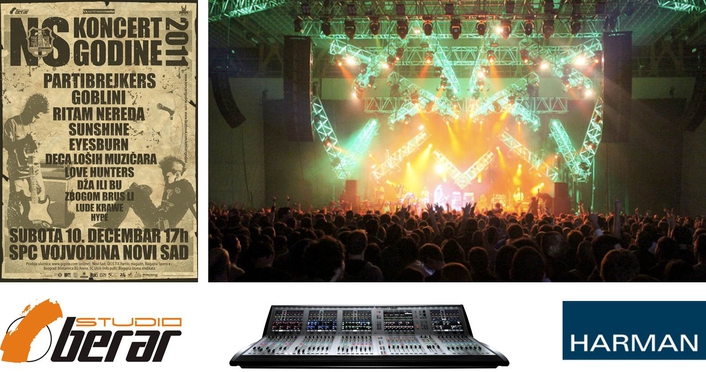 Since this is the largest centre of its kind in the Balkans—and the event hosted all the year’s best bands in a 9-hour back-to-back show—Studio Berar needed to draw on all of its 28 years’ experience, which in the case of NS Koncert Godine dates back to 1993.

Working with production managers Momcilo Berar and Emil Berar, the service company took responsibility for the entire technical realization, including stage, rigging and lighting, as well as the sound.

Other processing was also drawn exclusively from the HARMAN catalogue and included dbx IEQ 31 graphic EQ, Lexicon PCM 91 and PCM 96 reverbs, BSS DPR-402 and DPR-404 compressor/de-essers and DPR-504 gate. This was all reinforced with JBL powered VP7212 loudspeakers.

Studio Berar also took the opportunity to field its two Soundcraft Vi6™ digital consoles in the FOH and monitor positions—both configured with stage box and local racks. In addition a Soundcraft MH2 analogue desk was deployed for the second stage.

The highlight of the event, according to Studio Berar’s marketing manager, Lazar Josanov, was the continuous music—thanks to the deployment of the second ‘No Break’ stage. “Both stages were situated in the north-west corner of the hall, and close to each other, so that fans didn’t need to turn round to follow performers on the adjacent stages,” he said. “An advantage of this was that some of the same equipment could be utilized for both stages.

Of the auxiliary stage, Josanov reports that production was thrilled with this new approach, which enabled the musical marathon to take place without a break. “On the main stage were the older, more famous bands and while they were changing over, young up-and-coming artists were reveling in their first 15 minutes of fame on the No Break stage,” he said. Major acts appearing included Partibrejkers, Sunshine, Eyesburn and Ritam Nereda.

Studio Berar’s technicians, who also undertook necessary Vi6 induction, were main sound engineer Ivan Paplacko, while Zoran Matic supervised the No Break stage. “These are among the most experienced sound technicians in Serbia and we were delighted to have them in our team,” praised Lazar.

“As for the Soundcraft desks, they were fantastic; we have two Vi6s and take every opportunity to put them out on our shows. Ergonomically they are laid out with everything in front of the operator, and there is no need to look around when running the show. Using Soundcraft Vi6s, technicians have the mix right in the palm of their hand.”

From the desks they also supplied a MADI bridge to enable the entire event to be recorded on a Mack Audio recording station.

Summing up, Lazar Josanov described the event as a major success. “We had 1500 more visitors than last year and this was due to the efforts of the whole Studio Berar production team, the No Break stage and, of course, the very best HARMAN Professional sound reinforcement. It was unquestionably the best concert of the year in Serbia.”