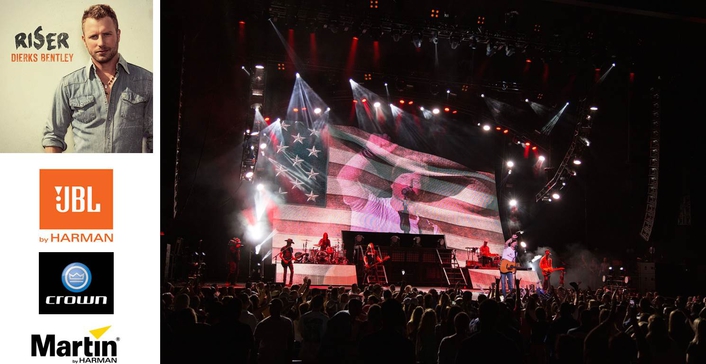 “Dierks really combines country and rock together and this show is very much like a rock and roll production,” said Chance Stahlhut, Account Manager, Tour Sound, VER. “At the same time, he’s true to his musical roots and the country element comes through in his performances.”

FOH Engineer James “Pugsley” McDermott has been working with Bentley for approximately nine years, and on this tour is working with monitor engineer Scott Tatter, system engineer Kennith Sellars, and RF tech Ashley Zapar. “With Dierks, how it sounds on stage is exactly how he wants it to sound out in the audience,” McDermott said. “He knows his crowd and he wants it to be an energetic show. He’s spent a lot of time putting the show together and he keeps you on your toes as an engineer. He’s the kind of client you want: someone who will push you to be as good as you can be and will make sure you’re always on your game.” 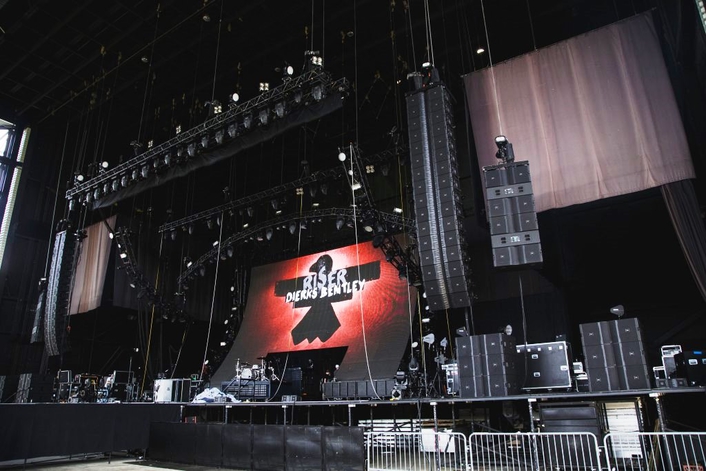 In his approach to mixing Bentley’s shows, McDermott’s priority is finding the perfect balance. “I treat this as a true rock and roll setup,” he said. “I want to mix to my audience, so if the crowd is loud I want to be just as loud. I want the first downbeat of the very first song to knock people back, to be impactful and surprising. That way the people know they’re in for a high-energy show. The PA and console are my instruments in that regard.”

McDermott added that he has worked with JBL throughout his entire career. “I’ve seen their products evolve over several decades and I’ve spent the past five years working with every loudspeaker you can name,” he said. “I’ve never had issues with JBL because I always know what to expect. They’re workhorse products in this industry.”

McDermott first heard the VTX system two years ago and was impressed, to say the least. “I think it’s an accumulation of line array concepts and processing and drivers and design working together to get a good product,” he said. “It’s not too heavy, you can fly it in most places; you can hang more boxes compared to other speakers. I love the top end of it, I think it’s the most brilliant sounding speaker that JBL has developed.”

“The VTX is just a really great box, it’s very consistent and we’ve had great results with it,” Stahlhut said.

Reade mentioned that he was impressed right away with the MAC Quantum after seeing it at the LDI trade show in November, and decided he wanted to make it the workhorse in his rig. “The Quantum has powerful looks that can be used in a dramatic fashion,” Reade continued. “This fantastic set and video design by Bruce Rogers has big rock and roll features, but also some subtle theatrical elements as well. It was fun to work together with Bruce, and together make the complete design with the Quantums in mind.”

“The Quantum light has a lot of effect possibilities and narrowing it down to get powerful, unique looks, without overdoing it was a challenge,” Reade said. “I believe effects are more powerful if they are not used over and over throughout a show.”

“The Quantum is a great pairing with the Viper because the output is amazing, and after I showed Reade the fixture at LDI, we immediately found a way to incorporate it into his design,” said Gibson. “Reade and the Dierks Bentley tour have been great, loyal clients. We work well together and I always try to provide him with the latest products. I gave him the Auras a couple years ago and then the Vipers last year, and I’m proud to say that he is now one of the first tours with the Quantums!”

Reade mentioned that the MAC Viper is a powerhouse, being extremely bright and very fast with great optics and color mixing; it’s his number one choice.

Reade also said he enjoys the MAC Auras as well and typically uses them in groups to add to the effect, while the MAC 700 Profile is used for front key lights to provide a great look. He also uses the standard MAC 2000 Wash for color wash and punchy stabs when they are zoomed in.

“The reactions have been amazing,” Reade added. “Everything came together really well between all the departments, it was a great collaborative effort. I think we’ve been able to create something powerful and unique, and I’m really proud to be a part of this. I think the Quantums get a great reaction from the audience when they go from being used as a wash light to then being used as an effect. It’s pretty cool and unexpected and to be able to quickly transform from one type to another is pretty incredible.”

“The support from Martin has been outstanding,” Gibson said. “Grif Palmer was a huge help in making sure we had the Quantums in time for the start of the tour, and we couldn’t be happier!”