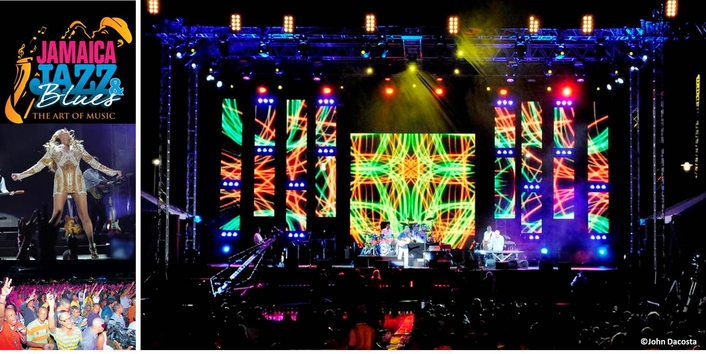 For the 2012 edition lighting designer, lighting director and programmer John Dacosta voted for two grandMA2 light consoles
In the beginning the Jamaica Jazz and Blues Festival was targeted at jazz and blues enthusiasts and was held in November each year. Various factors, including heavy rains which occur at that time of the year, encouraged the organizers to move the dates of the festival to the end of January.

Over the years the festival has become tremendously successful, attracting crowds of over 30,000 and is now a three day event. It encompasses a range of musical genres, including jazz, R&B, blues, Latin, Reggae, Soca, and various types of musical fusion.

“It was simply the best solution for the job because of the seamless integration of lighting and video”, stated Dacosta when asked why he choose the grandMA2. “When Celine Dion was added to the bill, I knew that the presentation would have to be larger than life, so I started on building the show with the biggest video surface that I could fit onstage. I worked with the grandMA2 which controlled our two Mbox media servers. It was a breeze!”

The 2012 Jamaica Jazz and Blues Festival was the kick-off of 12 months of celebrations as Jamaica celebrates 50 years of Independence. The video panels, lighting consoles and Martin moving lights were delivered by Zenith Lighting and the rest of the lighting equipment by PRG Orlando.