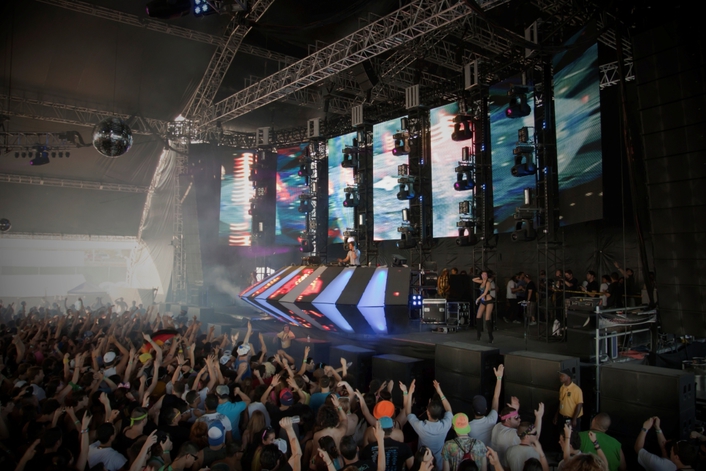 “We used a grandMA2 full-size on the new Main Stage,” says lighting designer Steve Lieberman of SJ Lighting, Inc. “The Main Stage had several acts per day that had full production riders to fill so, for the festival package, we decided to make the wings of the stage a very strong visual presence with large-scale video and heavy lighting effects. We also added 40-foot flame cannons on the top of the structure.”

Lieberman says that “as a designer the grandMA2 offers all the tools I need to put on a great show. In these environments, where the music is not scripted, the grandMA2 makes a great busking console. The ability to run the desk and make changes in an instant is invaluable to me as an operator. When you have 16 universes full of moving lights, LEDs, conventional lights and more, you really need to be fast laying things down. “

Clay Paky was the primary lighting on the Main Stage, with Alpha Spot HPE 1500s the spot fixture of choice for the performance area. “Their great zoom range, fantastic iris functions and outstanding aerial gobos were some of the features that really made this fixture stand out,” Lieberman notes.

Lieberman also placed eight Clay Paky Sharpy fixtures on the downstage edge for beam aerial effects. “Don’t be fooled by their small package – I was lighting up buildings across the highway with these fixtures!” he says. “They kept up with the rest of the rig with no problem at all; considering that the rest of the system was all 1500W units, I was very impressed!”