grandMA2 Cuts it With Scissor Sisters 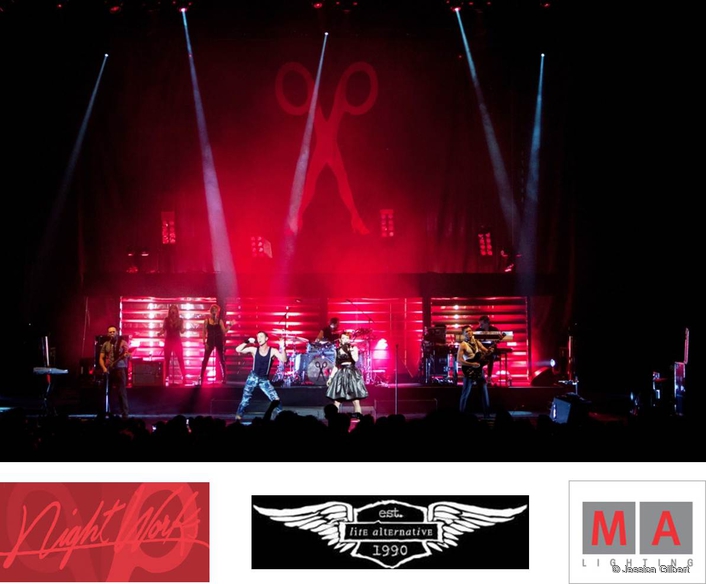 Night Life: Reflecting the nervous voyeurism of people-watching-people at night, glimpses of nightlife, night workers, etc.
UK based lighting designer Paul Normandale specified a grandMA2 light console to run lighting for the Scissor Sisters current "Night Works" world tour. Normandale likes the feel of the console, and used one with Glen Johnson (Scissor Sisters Lighting Director) on the Courteeners earlier in the year. Johnson has been using the grandMA2 ever since it became available with great success and enthusiasm.

Instrumental to them choosing it this time around was the new Universal Effects and Universal Presets, features implemented with the latest software upgrade. This means that if a colour is programmed in CMY it can be applied to all fixtures using a CMY effect, dispensing with the need for separate palates for fixtures. If two dimmer channels are used to create a dimmer effect (i.e. a chase) then stored as a Universal Effect, any fixture with a dimmer can be selected and this applied to it instantly. It is an exceptionally quick and useful tool.

There are 2 x grandMA2 lights on the road - the show console and a backup, complete with an MA NPU (Network Processing Unit). The desk is also triggering a media server running 10 layers of video direct via Art-Net from the console, which feeds Pixled F-7 screens upstage for the arena shows.

Normandale is enjoying his first work with the band, known for their own visual daring, huge energy, funky costumes and steamy molten mix of clubby pop, electro, rock and unashamed disco. 'Visuality' has always played a key role in the entertainment value of their live performances, and this is no exception, with stunning, intense, physical Robert Mapplethorpe images projected onto upstage screens for the arena shows.

The monochrome texture of the arresting images gave Normandale one of many creative starting points for his lighting design, stark and edgy, reflecting the nervous voyeurism of people-watching-people at night, glimpses of nightlife, night workers, etc., and this is what prompted the idea of the louvers ... revealing only passing snippets and slices of info.These louvers - built by Specialz - are also controlled by the grandMA2 light via a custom file written by Johnson. They have seven effects - black, open, silver mirrors, 45 degree black, 45 degree silver, rotate clock + speed, rotate anti + speed.

The tour is currently in the US and is scheduled to run until September 2011, with lighting equipment and consoles being supplied in the US and Europe by Lite Alternative.

And the Party goes on and on
grandMA stands the test of time: Upgrade and training for RCTI
It’s a Beautiful Thing for grandMA