Grand Opening Show of the "Ski Festival with Heart" 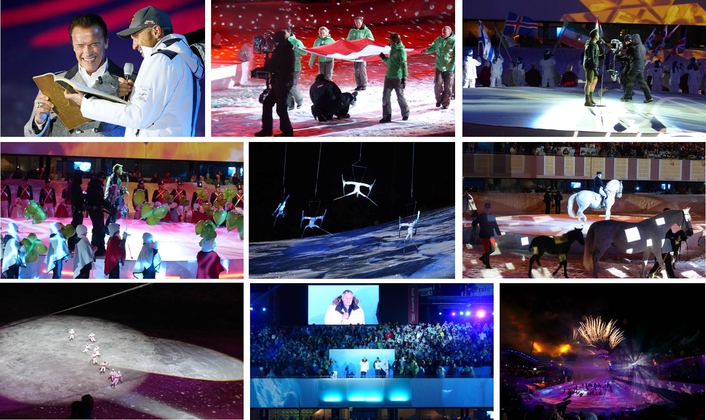 .
A beautiful Opening Ceremony marked the official beginning of the FIS Alpine World Ski Championships 2013. In the next two weeks Schladming will serve as the home for the best skiers in the world as they compete for the title of World Champion. During the one-hour show, which literally started with a bang –  the host nation’s beauty and traditions were highlighted through a combination of video projections, a choreographed lightshow with dancers, skiers, artists, acrobats and horses and a firework show.

A combination of national and international stars, including former Austrian Ski Champion Herman Maier, skier turned entertainer Hansi Hinterseer and Austrian native Arnold Schwarzenegger guaranteed an unforgettable evening for the thousands of fans who came to the Planai Arena for the event.

The Terminator joined the "Herminator" to get the Alpine skiing world championships started.
Austria-born Arnold Schwarzenegger and skiing great Hermann Maier shared the stage Monday during a rain-drenched opening ceremony of the 42nd Alpine worlds in Schladming, which is part of the Styria province where the superstar actor and former California governor grew up. Schwarzenegger said "I still call this my home. Here I was born and I grew up, here I started my career and found my way into the world." During his successful career which ended in 2009, Maier was nicknamed "The Herminator" after Schwarzenegger's "Terminator" movies.

Athletes and their team, fans and officials all witnessed the symbolic passing over of the FIS flag from the representatives of the 2011 Garmisch-Partenkirchen World Championships to the Schladming organizers. The evening wrapped up with FIS President Gian Franco Kasper addressing the cheering crowd and officially proclaiming the FIS Alpine World Ski Championships 2013 open. 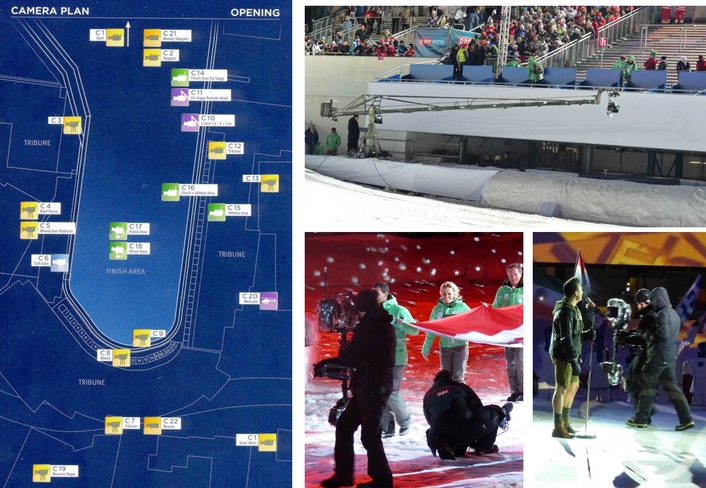 "Since their election 5 years ago, the Schladming team has invested a lot of effort and also a lot of money to prepare for these World Ski Championships," the FIS President said.

"We can still recall the situation in 1982 when the last Championships took place here and due to the rain and lots of water that kept the fire brigade busy we postponed the men's downhill to the very last day of the championships. That was risky but we were lucky and Harti Weirather went to win the gold medal. We are very positive and expect a truly spectacular festival of skiing again this time."

"The criteria for successful World Championships of course include great interest in the hosting venue, region and nation which we undoubtedly have here in Schladming, in the region of Styria and Austria in general. Beyond that, we want to see amazing images and thanks to the extraordinary efforts of the host broadcaster ORF everything is ready for worldwide echo and interest in the event. Finally we hope for a balanced distribution of medals across the broadest possible range of participating nations," Kasper concluded.

It was an impressive and varied opening ceremony. At 7.36 PM FIS President Gian Franco Kasper inaugurated the championships by using the traditional opening phrase. Until 17 February 11 medal events will take place in the Styrian host city. The first ones were the women's Super-G on Tuesday and the men's Super-G on Wednesday. 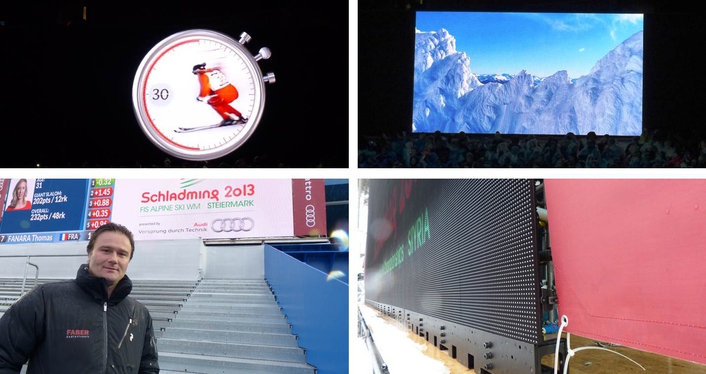 Schladming acts as host city for the second time after 1982. ÖSV President Peter Schröcksnadel thanked the Styrian and the federal government and every single individual involved for their engagement to give out the idea and message of the "Ski Festival with Heart" to the entire world. Stars like Rainhard Fendrich, Wolfgang Ambros, Nadine Beiler and Andreas Gabalier made the opening quite special and glamorous.

The opening ceremony was covered with 22 cameras for a world-wide TV audience. The setup included five wireless cameras in the arena and a wireless transmission of the Wescam signal from the Helicopter at the very beginning of the show.

During the show a special camera feed was displayed on two screens for the spectators in the Planai arena: one 45m² AOTO screen with SMD technology and one 30m² Mitsubishi screen with LED technology. Both screens were delivered by Faber Audiovisual and performed perfectly.

Faber Audiovisual was responsible for the whole setup of the event technology in the arena including the lighting (mainly moving lights from Clay Paky) and the audio distribution via L-Acoustic loudspeakers. A separate event production was setup by Faber with two grandMAs for the lighting, a Yamaha audio mixer for the wireless Sennheiser and Shure microphones and a Folsom Encore vision mixer.

The 3.500sqm video projection onto the snow covered finish area in the Planai Arena consistedof twelve Video projectors Christie Roadster 20K and the 3.200 sqm onto the spectatorsarea consisted of six large image projectors with image scrollers, with 60.000 lumen each. The etire projection equipment was installed by theAustrian company Rezac High Power Projection.