Grand Gig Puts Its Hands Up for Robe 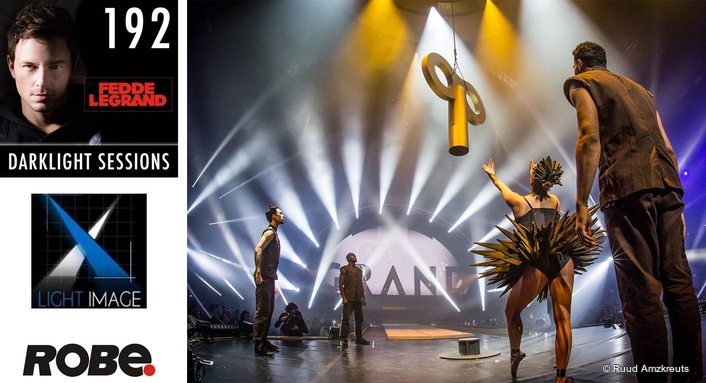 JJ has been Fedde’s lighting designer since 2013. When the first GRAND live concept was staged in 2015 he came onboard to evolve the lighting, and asked Bas van der Poel and Jeroen van der Velden of Light Image – both of whom he’d known for some years - to assist in what was a complex design process. He joined the imaginative lighting design, programming and operating practice based in Utrecht full time at the end of last year.

This year’s GRAND was a one off show demanding high-impact visuals with minimal time on site and intense pressure to produce the spectacular results that all were expecting! 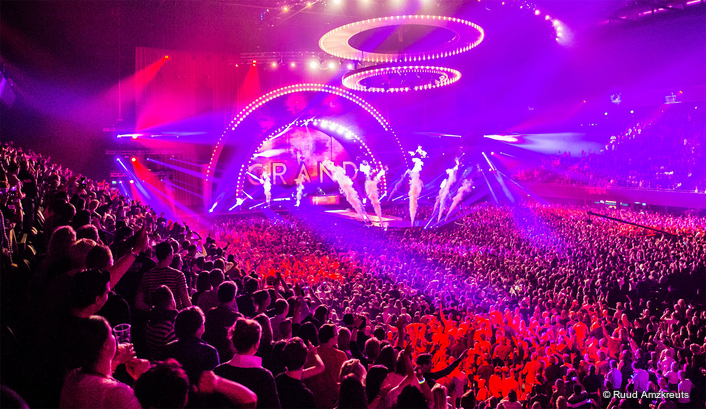 JJ started with the set which was designed by Sightline Productions - chosen by Fedde and show director, Sjoerd van Schooten of RTL Live Entertainment, and the idea was to transform the Ziggo Dome from a standard arena venue into an immersive, dramatic theatrical space for the evening, reinforcing the set architecture which was based on arches and curves.

With the spherical theme in mind, the lighting positions were created using lots of circular trussing, rigged with 43 x Robe BMFL Spots, 65 x Pointes, 64 x LEDBeam 1000s and 48 x CycFX 8s. The circles also looked good as a structural sculpture for guests when looking up onto the celling, and the fixtures reached all over the stage and audience area, getting the light exactly where it was needed.

The BMFL Spots were the primary key lights. They were required to cover a plethora of dancers, acrobats and performers onstage and lots of action throughout the evening. “We needed the power and intensity of the BMFL to make everything visible,” explains JJ.

The Pointes were dotted all around the trussing and the floor, chosen for their speed, versatility and tight beams, all of which made them perfect for this gig and catching some of the more off-stage dance routines. JJ comments that the frost filter is very helpful for extending the Pointe’s wash coverage. 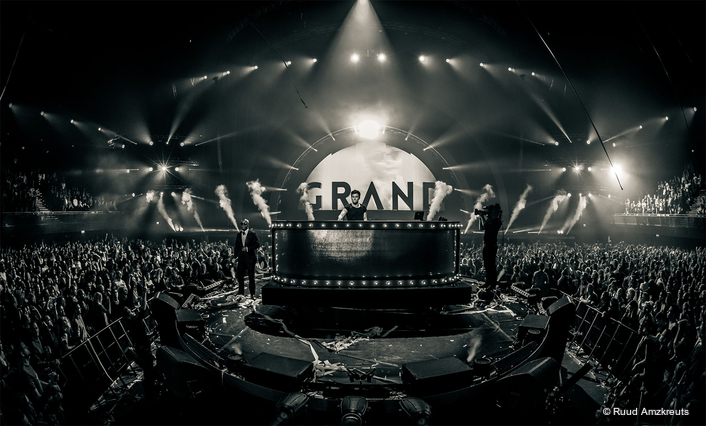 He had already seen the LEDBeam 1000s in use on a few other projects and really liked them, so this was a great opportunity to spec them. He likes the way-cool fat beam, the power, the punch and the zoom. They were used to reach from the front to the back of the arena, washing it with colour and atmosphere. JJ reckons, “It’s the most amazing LEDBeam fixture available right now”.

The CycFX units were used as specials, with the flat beams creating an eye-catching wall of light that contrasted well with the other fixtures.

JJ programmed the show using a grandMA2 full size console assisted by Jeroen, while Bas from Light Image project managed the lighting elements of the show.  The grandMA was chosen as the best desk for the GRAND show set up, although JJ’s usual go-to console for running Fedde’s touring shows is a PRG V276 Faderwing.

The main challenge was getting it all ready in time, with just one on-site rehearsal and a huge amount of onstage activity. ‘It involved a lot of typing!” he quips.

He’s been using Robe since the launch of the ROBIN series of products in 2010 and thinks the BMFL is “Amazing” together with the MMX series.

All the lighting kit was supplied by leading Dutch rental company, Ampco Flashlight and their crew were Juan Neele, Anco Stielstra and Christiaan Shutte. Ampco Flashlight is currently rapidly expanding its Robe stock to keep pace with the demand of LD’s like JJ.

The core of Robe’s current product ranges – BMFLs, Pointes and the MMX series - are all ideal for large EDM events like this due to their true multi-functionality and the fact that they offer so many different possibilities over a long hi-energy event which everything needs to keep pumping!

JJ believes Robe is currently one of the top moving light manufacturers. 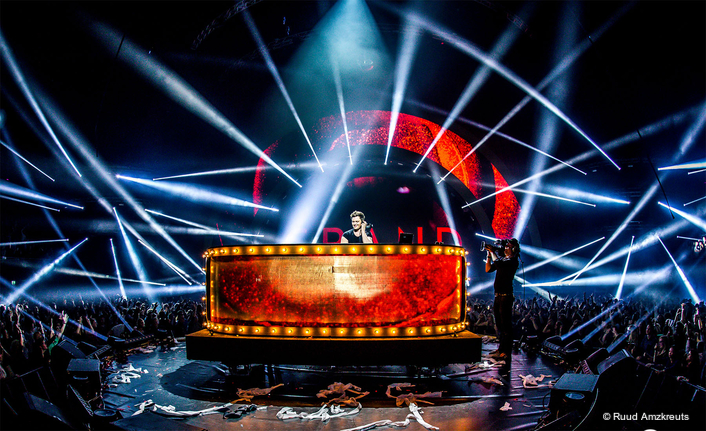 JJ joined the innovative and imaginative team at Light Image at the end of 2015, and before then, was a busy freelance LD for some years. He’s been working with lights since the age of 12 when he started off lighting school parties and musicals, and his professional industry career commenced three years later after a night out at a local dance club! Monday morning, he picked up the phone … and told them their lighting sucked!

So … they invited him to come along and put his money where his mouth was and do a proper lightshow! He started working for Flashlight Rental around the same time which was a great proving ground before going freelance and then joining Light Image. He loves designing and operating lights and working with a great team like Light Image.