The Grand Finale of "Germany's next Topmodel - by Heidi Klum" 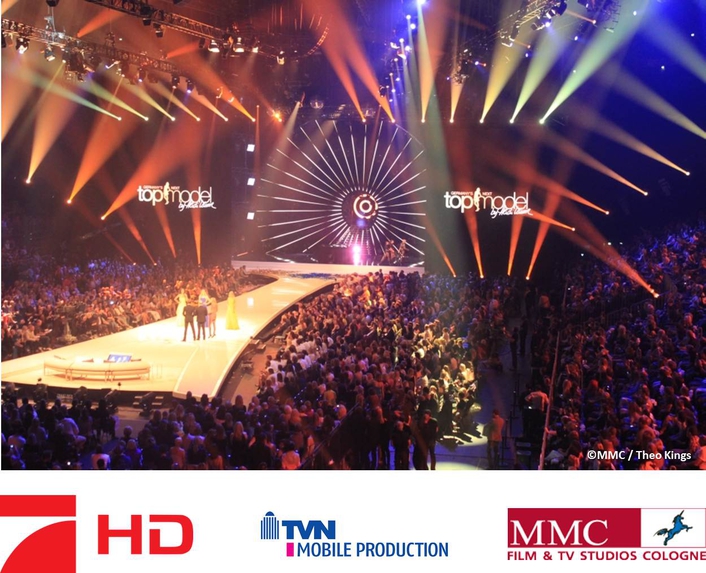 Fifteen thousand enthusiastic fans followed the event in the sold-out Lanxess arena in Cologne
On June 9 2011, at 8:15 PM, the broadcaster ProSieben presented the grand finale of "Germany’s next Topmodel". On behalf of Tresor TV, and as engineering prime contractor, Magic Media Company (MMC) produced the entire show.

The final show of "Germany’s next Topmodel - by Heidi Klum" is ranked as one of the largest broadcasting events in the world – and it was certainly the most beautiful.

The two and a half hour long live show was kicked off by the three hovering finalists, Amelie, Jana and Rebecca. They glided onto the catwalk in spherical luminous gondolas. After several chances for each finalist to impress the judges and after spectacular performances by the musical guests Lady Gaga, Keri Hilson, and Caro Emerald, the result was known at 10:54 pm. Twenty-year-old Jana Beller was designated "Germany’s next Topmodel" 2011 by Heidi Klum and her jury colleagues Thomas Hayo and Thomas Rath. 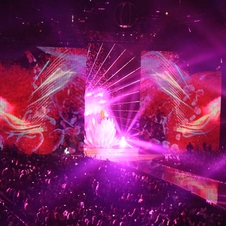 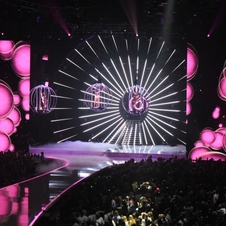 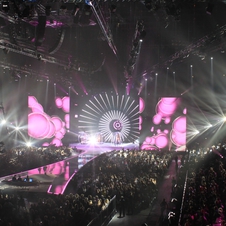 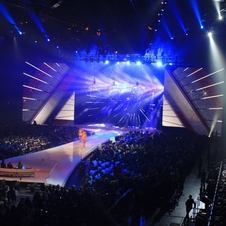 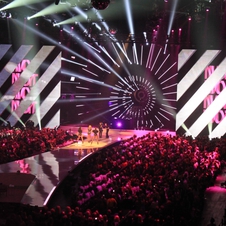 Fifteen thousand enthusiastic fans followed the event in the sold-out Lanxess arena in Cologne, and 4.82 million viewers watched it on TV. Among 14 to 49-year-olds it achieved a rating of 24.3%. With an average market share of 18.8%, the sixth season of the show is well above the previous year’s percentage. 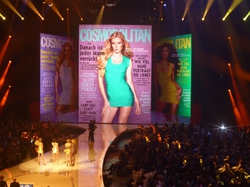 In 2011, as in the past two years, MMC was responsible as engineering prime contractor for producing the finale of "Germany’s next Topmodel – by Heidi Klum". All subsections such as camera and broadcasting technology, lighting, media technology, sound engineering and P/A, stage construction, kinetics, rigging, and special scene constructions, as well as a technical staff of more than 120 people, were coordinated by a single source. There was a single contact partner for all questions raised by the clients, Tresor TV and ProSieben. This arrangement proved extremely effective, because all consequences of any proposed changes could immediately be determined.

Julia Berg was responsible for MMC’s project management. Nico Roden, MMC’s project manager for lighting and audio engineering, was on site and coordinated all lighting and audio functions. Jan Schubert, MMC’s Head of Operations, coordinated the TV production technology in the arena as production engineer. The people responsible for the stage construction and for all props and decorations were Thomas Henshen, Head of the Art Department, Theo Kings, project coordinator TV, and Klaus Bartelheimer, stage manager.

There were significant changes from past years, particularly in the stage area. As a new central stage element, there was a huge funnel, the so-called "eye", consisting of three deeply structured circular trusses with diameters of 55.1, 32.8 and 13.1 feet. Steel tubes were installed perpendicular to the circular trusses, which were fitted with Barco’s MiStrips. Within the circles, moving lights by Clay Paky Sharpy were used. 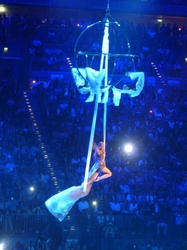 The "eye", with its combination of media technology and light as well as a perspex stairway, provided a great background for the models and for the musical acts of Lady Gaga, Keri Hilson, and Caro Emerald. In particular, the live performance of Lady Gaga, where 3 perspex guillotines complemented the stage design, fascinated the spectators. The appearance of Heidi Klum in a strikingly large flower was another special highlight.

As in 2010, a huge movable LED-MiTrix wall (57.4 ft x 32.8 ft) provided the setting for many events on the catwalk. This year’s visually stunning production was supported by two 137.8 feet long rail track systems. The final show started with the models hovering in three gondolas, supported by round steel struts which traversed the entire arena. Additional lighting and Solaris spheres attached to the gondola struts, along with minimized lighting in the arena and appropriate music, ensured a magic moment in the arena.

For the live broadcast, MMC used the OB truck TVN-Ü2HD. A total of 15 cameras were used for the TV production (the camera types included Sony HDC-1500R, Sony HDC-3300 (Super SloMo), Sony HDC-1P and Toshiba IK HR1). Among the cameras one camera was on a SAM-Dolly on rails, three cameras were on cranes (Supertechno 50, Supertechno 30 and JimmyJib), one was a Sportscam, and one was a Steadicam with a Blümer twin-wireless system.

The Super Slo-Mo and Highlight-Editing were done with the server system EVS XT 2. The pre-editing for the sequencing broadcast "red!" was done on site using an AVID Adrenaline.

Additional electric generators were used to meet the enormous power requirements. An estimated 66,000 feet of cable had to be run through the arena to provide the signal distribution and power supply for this unique event.

Jürgen Hörner, managing director of ProSieben, was enthusiastic after the show: "This finale was a TV event that has set new standards". 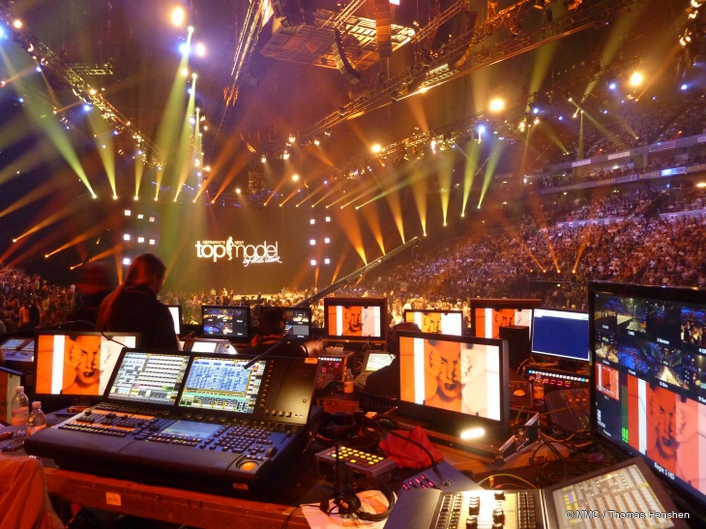 FOH at the Lanxess Arena in Cologne