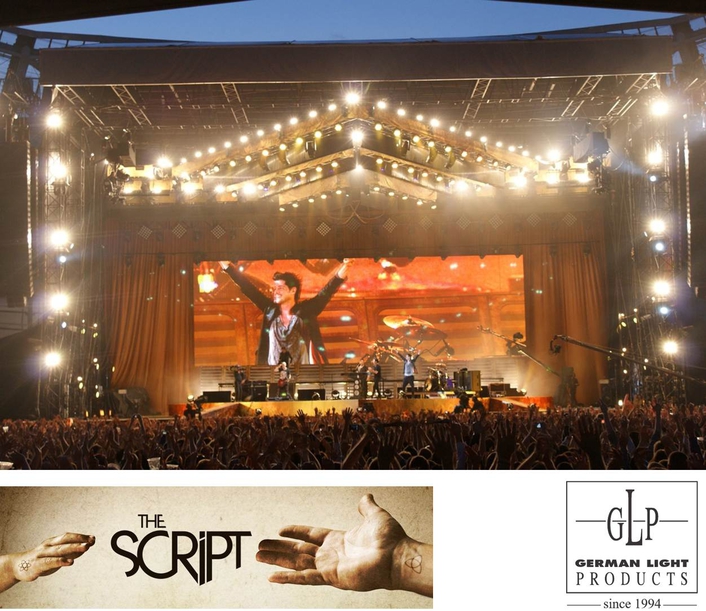 The Script tour began in Autumn last year and has travelled back and forth between the US and UK several times
This year has been a memorable one for Irish indie band, The Script and their lighting designer, Jamie Thompson. Not only has he been touring a highly creative lighting set — scalable to arenas and stadiums — but has been rewarded for his efforts by receiving a coveted Knight of Illumination Award.

The lighting design, co-conceived with Bryan Leitch, was inspired by the rustic gold colour artwork of last year’s Science & Faith album — and heavy usage of GLP’s impression 90 and impression Zoom has helped him to recreate that feel. With more than 100 of the GLP impression wash lights used on the overhead trusses and under the floor grilles as uplighters the LD knew from past experience that he not only had a compact, versatile edge light but one that would more than hold its own against any conventional discharge washlights he could throw at it.

Jamie has been working with the band for almost three years. “I was asked to cover a few shows and ended up getting on really well with the band. They have a lot of ballads and big tracks and they trust me to make those songs look even bigger with the lighting.”

It was in Siyan’s inventory that he first discovered the impression, subsequently  using them with acts such as Biffy Clyro and Le Roux. He has also used the more powerful impression XL’s with Animal Collective, observing the “incredible punch” they produce. “I have been using impressions generally for a long time now and really like them. They are just great fixtures … very small and very bright.

“It’s far superior in terms of dimmer curves and has none of the inadequacies of other LED moving heads I have used, which don’t sync as well with fast colour plants as the impression does. With the impression RGB’s you get nice saturated colours which balance well, and with clean open white beams where you don’t see patches.”

The Script tour began in Autumn last year and has travelled back and forth between the US and UK several times since then, playing theatres Stateside and arenas and festivals over in the UK.

The intention was to create a stage with a triangular feel, and to bring lead singer Danny O'Donoghue out into the crowd on a 16ft thrust. “The whole set was built around the triangle, which worked really well,” says Jamie. “The set is scalable but the only thing that really changes is the trim height.”

Since The Script’s music is often slow and dramatic Jamie has been able to build the atmosphere using some of the impression Zooms as powerful uplighters under the stage grille, while above the arena the three triangular V trusses are each lined, at one metre distances, with impressions.

“They are 35ft up in the air yet hold their own comfortably as an edge and spot light. And when you tilt the uplighters you get some great waves off the tilt.”

But he says the biggest advantage is the sheer quantity he has been able to use. “You can have three GLP’s for every conventional wash, because there is no ballast weight, and you can put them into places you wouldn’t normally be able to.

Now he is hungry to get his hands on GLP’s next generation SpotOne — but in the meantime will happily continue to specify the standard impressions on his shows.

One great „Lightsphere�...d 30 impressions for a-ha
Live-Broadcast of German ... Finale from the Coloneum