The latest in Talpa Media’s string of hit TV talent shows is about to hit the screens this Autumn when The Next Boy / Girl Band is broadcast by SBS6. The imaginative stage set has been lit by Light-H-Art designer Bas de Vries and his assistant, programmer Joost Wijgers.

Having collaborated on a number of similar TV talent shows for Talpa in the past, including The Voice, Dance Dance Dance and It Takes Two, the two men this time turned to 12 of GLP’s GT-1 hybrid Spot / Beam to dominate the set, which has been built at the giant Studio 24 on the Media Park in Hilversum.  The fully-featured fixture — the only spot used in the set —contains a high powered 470W discharge lamp while the high quality optical system produces a light beam that features an enormous 22:1 ratio zoom range from 2.5° to 55°.

“We got to test a GT-1 when we were recording Dance Dance Dance and thought it would be a great fit for The Next Boy / Girl Band,” admits Joost.

The show itself is recorded in front of a live audience. The main elements of the scenography are three big elevators rising up from the floor, revealing the three candidates auditioning for the boy or girl band. “Therefore, the entire stage and audience needed to be raised 3,5 meters above the normal studio floor,” he reports. “As a result, this left restricted height for the remainder of the set, instead giving it a real feeling of width.”

As the only spot fixture used in the rig, the GT-1 has a leading role in setting both the look and feel of the show. “Using both the beam and gobo function of the spot, we have been able to create very different looks with a limited number of fixtures,” he reveals.

Supplied as part of the overall lighting package by Ampco Flashlight, the GT-1s are placed in a single straight line behind the stage — in a simple, but highly effective deployment, according to Joost. “We use both the Spot and Beam mode, which gives a nice variety to the looks. We also use the different prisms fairly extensively.”

Presently at the audition stage Joost says the GT-1 is as responsive as he would have expected “which is user-friendly, fast and accurate.” 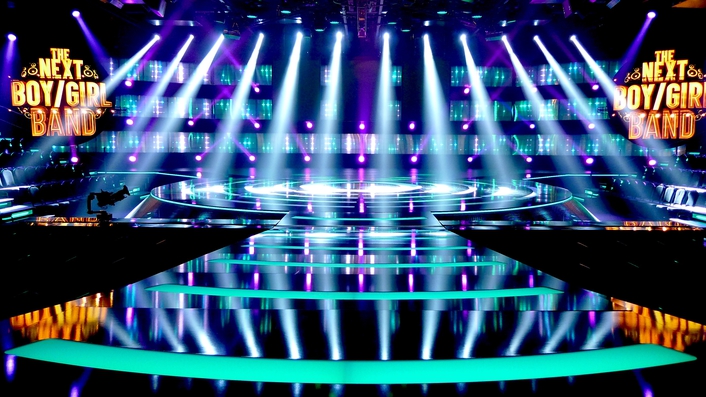 And of the fixture’s attributes he states, “The GT-1 is a very versatile, powerful and elegant fixture, with gobos, beam, various prisms, wide zoom range and fast and high output. Also, we really like the design of the fixture — the small base is a really nice touch, making the GT-1 very suitable for sitting on a stage floor. These features make it ideal for a production such as this, involving a number of different songs and looks.”

Following the six audition episodes, currently being recorded two live shows will be screened by SBS6 in October.