Lady Gaga gave a scintillating, high-flying performance at the Pepsi Super Bowl 51 Halftime Show at the NRG Stadium in Houston. Opening with God Bless America on the roof of the stadium she leapt to the stage before cramming seven of her greatest hits into the 12-minute show. Gaga then threw the microphone down to the field while simultaneously catching a football. The acrobatics throughout were stunning.

Everything, from ‘Shooting Star’ drones flying in unison above the stadium to create the American flag to the stage surrounded by fire and Glow Motion torches, was top drawer.

The fact that this was universally acclaimed as one of the greatest Halftime Shows ever, is due to the inventive production design orchestrated jointly by Bruce Rodgers of Tribe Inc. and Roy Bennett of Seven Design Works, as well as Ricky Kirshner, Executive Producer, Touchdown Entertainment. Adding the lighting dimension, using fixtures from the GLP portfolio in mission-critical roles, was Bob Barnhart of 22 Degrees, working on his 19th Halftime Show.

Sourcing inventory again from PRG’s LA-based Tony Ward (who was also event Gaffer), he incorporated 60 of GLP’s powerful GT-1 hybrid fixtures, placing them on the speaker carts located around the stage and field of play, as well as on the two ‘Tower Carts’ either side of the main stage, where Gaga landed after her flight from the roof.

He then used a combination of 170 X4 Bar 20 and 14 X4 Bar 10 — the innovative and award-winning battens he had deployed so successfully on their launch at the 2015 Super Bowl Halftime Show (with Katy Perry). This time they were located within the stage floor and were vividly brought to life by special effects company Strictly FX who seeped haze up through the stage floor, animating the beams in spectacular fashion. The eye-catching effects, creating multiple (and often simultaneous) looks between the core and the perimeter were a testament to the programming. This was entrusted to Halftime Show regulars, Jason Rudolph, who was responsible for the floor, piano ball and glow motion sticks, and Pete Radice, who took charge of all the other fixtures.

The extravaganza marked the end of a long process that began in April when the team from production company, Touchdown Entertainment site surveyed the venue and general spot / lighting positions were suggested even before it was decided whether the show would take place on the 50-yard line or end zone.

Other decisions, such as broadcaster camera positions and whether the roof was to be open or closed (this year it was open) informed the creative process.

According to Barnhart, the function of the lighting was to enhance the more asymmetrical elements of the design theme created by Rodgers and Bennett.

Placing lights on the rails of the stadium to show scale and height was essential while GLP’s GT-1’s, which the designer had first used on the American Music Awards, were employed on all speaker carts wheeled out for half time.  “This gave us a large oval of light on the wide shots, which in turn provided another dimension of scale,” he said.

“The Halftime Show always has the unique challenge in that you have seven and half minutes to load the show onto the field. Lighting directors, Pete Radice, Jason Rudolph and David Grill do an amazing job of making sure whatever crazy idea Bruce Rodgers and I come up with, will happen.  The lighting crew is also an integral part of pulling this off — they have to tell us if this can happen or not.”

Bob Barnhart had wanted two types of fixture on the tower — including a ‘hot beam’ effect.  “The GLP GT-1 served this purpose well, as it is lighter than its cousins and a bit smaller.  Since the tower had a weight capacity this allowed me to use a few more pieces — and these offset the other fixture that I selected.”

As for the wide-scale use of GLP’s award-winning X4 Bars, Bruce Rodgers, Roy Bennett and Lady Gaga had been looking to avoid an LED floor this year, and having developed a stage instead, gave Bob Barnhart carte blanche in his fixture selection. 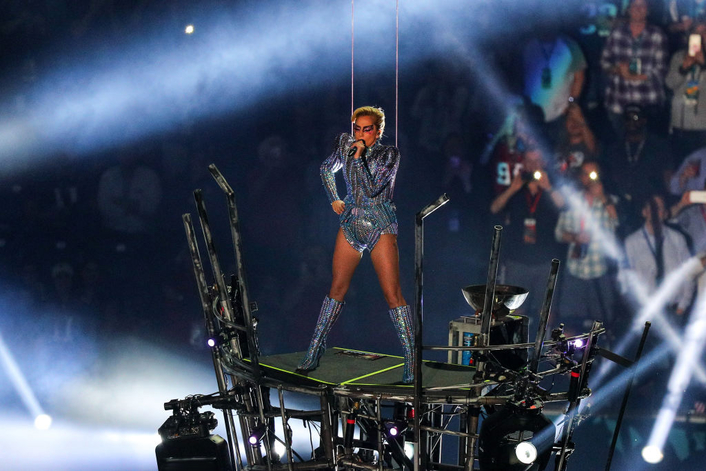 “After discussing with Roy we decided that the GLP X4 Bars would give us a range of features that would get us safely through the 12-minute show — from being able to control each pixel to the ability to tilt back and forth.”

He confirmed that the Strictly FX smoke pockets, distributing smoke evenly throughout the floor, had become a signature moment. “It was the perfect accent to the overall theme and fully justified the concept.”

Consequently the Pepsi Super Bowl 51 Halftime Show will occupy a special place for the lighting designer.  “It was incredibly challenging this year,” he stated. “Introducing the Shooting Star drone to the event, which had never been done in this environment, It created a three-month series of hurdles for me, each one getting higher than the previous. Top that off with the scale of this year’s show and I think it makes it #1 in my book, with Katy Perry being a very close second.

“From the GLP GT-1, adding a new layer from the speaker carts, to the X4 Bars giving true life to the floor, it was a year that will be hard to forget.”