GLP and the Magic of Light 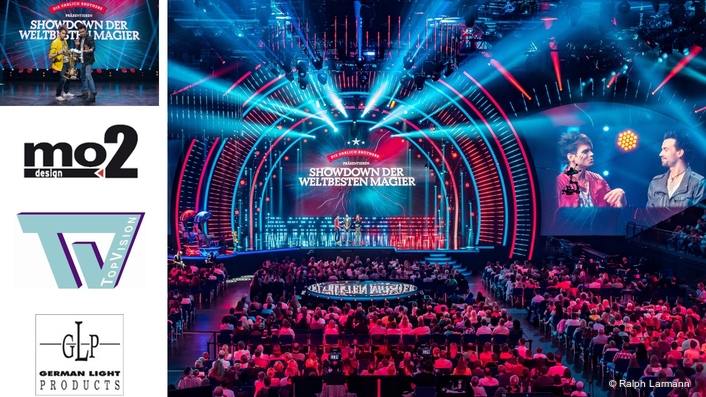 Mo2 and Ehrlich Entertainment GmbH join forces in Stuttgart on a unique TV show with the Ehrlich Brothers, using over 1,100 fixtures from GLP

Thanks to their incredible shows, the Ehrlich Brothers have become among the best known magicians and illusionists in the world. Their trademarks include trucks weighing several tons emerging from nowhere, trees growing in a matter of seconds, and almost everything disappearing from the huge stage during the course of a breathtaking show — and then reappearing, as if by magic.

In mid-July, the two brothers added further superlatives when they guested for three days in the Stuttgart Porsche Arena. First of all, there was the "Showdown of the World's Best Magicians", with selected guests appearing on the first two evenings, presented by RTL. Finally, on the third evening, the Ehrlich Brothers presented their new show "Magic Worlds" in an unprecedented format. Seen on stage were illusions that have never before been witnessed on their successful tours. 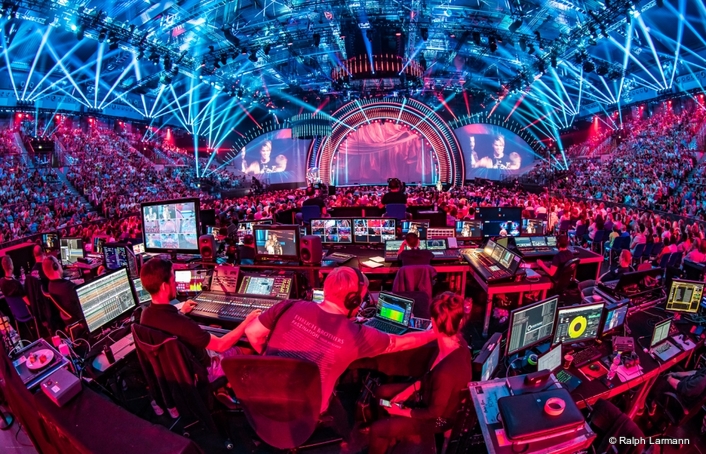 Working alongside Ehrlich Entertainment GmbH, were the Production Resource Group (PRG), who provided rigging, lighting, video and media technology, Schiffer & Faber for decoration construction, TopVision for image technology, PMT for camera systems and mo2 design were also on board. Their team, led by lighting designer Manfred 'Ollie' Olma and project manager Matthias Allhoff, took care of the adaptation of the tour production for television, taking over all tenders and planning, as well as the creation of media content and media and lighting design.

Ollie Olma was supported by Saskia Olma (content design), gaffer Tobias Hann, Paul Happ and Bennet Fuchs (programming) and server expert, Matthias Held. From Ehrlich Brothers’ production, Adrian Walz was the technical director, Marcus Krömer the lighting designer, programmer and operator, Florian Schmitt the programmer and operator, and Jannik Tödtmann the project manager and media technician. Ollie Olma himself was responsible for the TV lighting design and also acted as lighting cameraman. "The collaboration between the Ehrlich Brothers production and mo2 was totally harmonious," states the designer. "When designing and planning we were always in close coordination with the Ehrlich Brothers team, especially Adrian Walz and Marcus Krömer. Also in terms of the show operation and direction, the crews of mo2 and the Ehrlich Brothers worked in close cooperation, hand in hand."

The Ehrlich Brothers’ already gigantic tour set-up was increased again in Stuttgart. "In terms of tour production, nothing comparable is currently on the road in Germany," states Ollie Olma. "Even the stage is unique, as well as the often complex networked light and media technology that is required for the illusions of the two brothers. Virtually every detail of this is top secret — which of course does not necessarily make it easier for our lighting and media technicians! But we work very closely together with our production colleagues,” continues the founder and CEO of mo2. This production also goes to extremes on the TV side — with up to 26 cameras in UHD (4K) aimed at the two illusionists, transmitting every detail of the show (or not quite!) 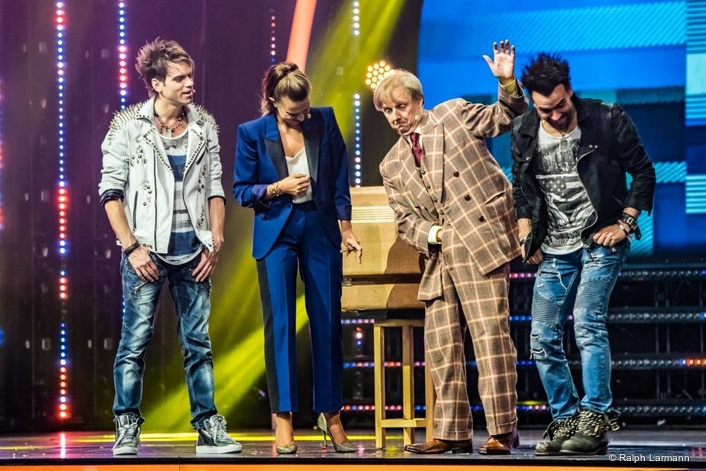 "Many of these pieces of equipment were used to transfer the otherwise on-stage show to a separate centre stage, set in the middle of the audience," reports Ollie Olma, outlining the challenge faced by mo2. He made special mention of the GLP impression X4 Bars. “All 826 Bars were controlled in single-pixel mode and pixel-mapped, resulting in a huge number of over 110,000 control parameters. Together with the necessary control channels for the other lighting equipment, it was too much for the MA2 control desk to handle. But as we wanted to use the Bars both as a light source — in addition to the main stage — as well as a complex video space, we had no other choice than to allocate the Bars to the video element. "In addition to the two grandMA2 full-size desks, additional six VPUs and 20 NPUs provided the necessary number of channels for this application. The VPUs were then controlled via the network from the light panels,” Olma explained.

A highlight — in the truest sense of the word — was the presentation of the GLP KNV fixtures that were used for the TV recording (of Magical Worlds). These were on a side stage and used for backlighting the show band, as well as the form of the letters "E" and "B". Previously, two KNV full circles were seen in the "Showdown of the Magician", as part of a special illusion. The use of KNV came about at the express wish of the artists themselves: "When we were first shown a single KNV module by Ollie during the preparation for the show, it immediately gave us an idea," says Christian Ehrlich. He described the performance of the KNVs with a wink, stating: "The effect worked brilliantly!" 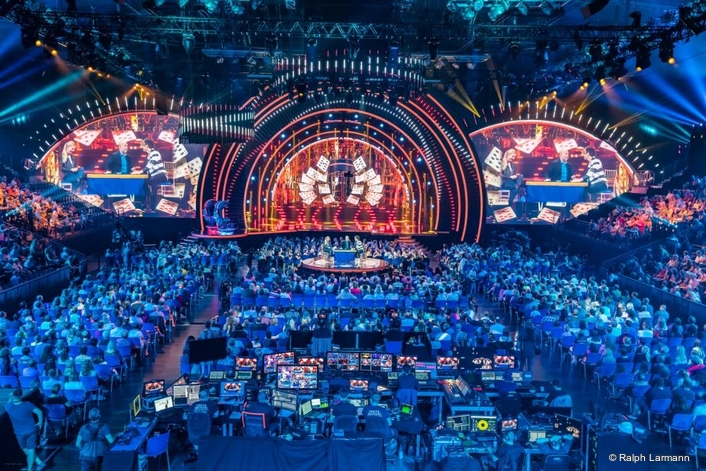 What the audiences at the shows finally got to see can only be described as unique; great illusions and fascinating tricks, embedded in a rousing show, framed by fascinating effects. Through the stage positioned in the midst of the spectators, an almost intimate atmosphere was created again and again, providing the two magicians with the necessary space (away from the main stage) to carry out some of their more incredible tricks and stunts.

The Zauberwelten production will provisionally be broadcast in November 2018 on RTL. The "Showdown of the world's best magicians" will be on air on August 26, 2018 at 20:15 on RTL. 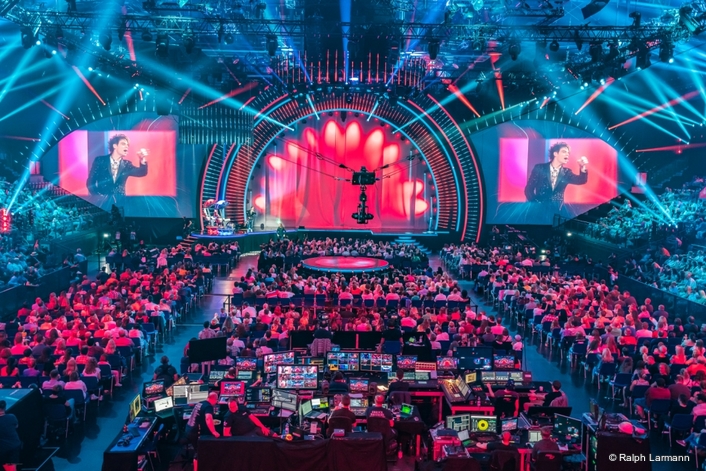 About GLP (German Light Products)
GLP was founded in Karlsbad, Germany in 1994, by Udo Künzler, and has evolved into one of the leading manufacturers of high-quality and innovative lighting technology — and in recent years become market leader in LED technology for the theatre and event industry. With the award-winning impression series GLP has created a new standard in the lighting industry, which is used and valued by leading lighting designers. Thanks to an ever-growing range of products, GLP gives designers around the globe eco-friendly and energy-optimized spotlights without restrictions in creativity or performance demands. With the acquisition of G-LEC and the opening of offices in Los Angeles (USA) , Hong Kong, United Kingdom and Sweden, GLP has been able to strengthen and expand its global market position in recent years.