Chosen by monitor engineer, AJ Sutherland, and supplied by Patchwork London for the European leg, the system comprised a Dante-enabled GLD-112 mixer with an AR2412 and two AR84 remote IO racks to manage five pairs of wedges and four stereo IEMs plus the engineer’s listen wedge and cue mix.

Promoting Enter Shikari’s fourth studio album, the tour included 25 dates across Europe, including two nights at London’s Roundhouse on a sold out UK run, and 30 dates in 23 States in America, which included two festival appearances.

“I bought a GLD-80 when it first came out and have used it on various projects over the past three years. I think it nails the midscale console market. The IO, functionality and audio quality are suited to the demands of high level productions and it’s small enough to fly around the world and fit on cramped stages,” comments AJ. “It’s really helped the remaining band members migrate onto in-ears, and they seem to be enjoying discovering what is possible, plus the management can’t complain about the price. Being able to have the same console for each show makes my life a massive amount easier and the band’s show a lot better. A&H is my first choice of console as they are so fast and easy to use which is vital on such a high energy show.”

The tour production is managed holistically so that all facets of the system – backline, audio, lighting and video – are integrated. Novation controllers and keyboards are positioned around stage for any band or crew member to control the track, with timecode flowing to lighting/video, and MIDI connecting everything from drum triggers and Kemper rigs to audio consoles and whammy FX pedals. 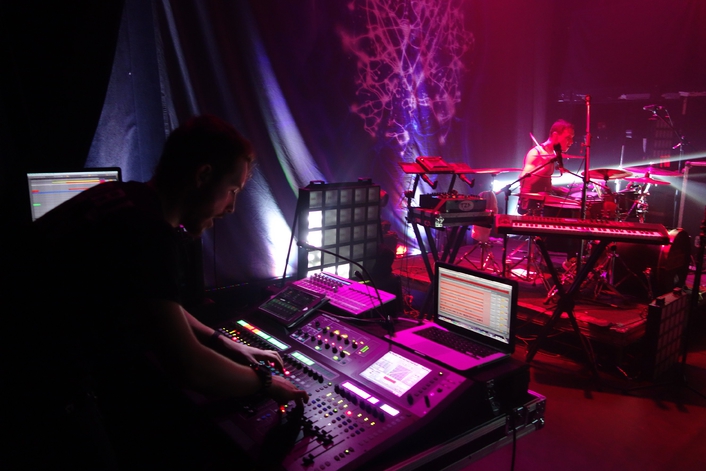 AJ with the GLD on the US tour in NYC and Lawrence, KS

As well as monitors, AJ also looks after electronics/playback.

He says:“As well as custom fader layers and iPad control I’m exploring some of the more unusual features of the GLD. I use a Dante expansion card to capture a multitrack recording of every show and a couple of GoPro cameras for video. I’ve also been sending MIDI commands from the playback laptop to the GLD to automate certain regular functions, allowing me to do things like go on stage and unplug the acoustic guitar the moment Rou is finished playing and be confident that the desk will mute that channel without banging in the IEMs. I also use MIDI to turn wedge mixes on and off and to boost/cut channel sends at specific parts of the set. Being able to automate these predictable operations frees me up to be on stage repairing mic lines or in the pit rescuing kicked over wedges.”

GLD has secured its place on Enter Shikari’s forthcoming dates in Australia and Eastern Europe, on the band’s headline festival run, which includes Download and Rock Am Ring, as well as an arena tour later this year.

Allen & Heath is Centre Stage at SXSW
iLive and GL Installed in Korean Stadium
Of Mice, Men and Mixers