Getting Hypnotic with Wilkinson

Colour Sound Experiment delivered equipment for a recent UK tour by pioneering d‘n’b music producer Wilkinson, a much anticipated series of sold-out gigs ahead of the release of his new “Hypnotic” album in April … working with lighting designer Sam Tozer.

Playing a variety of venues, this was a great opportunity for the company’s new pre-rigged trussing - a Litec product specially modified for them - to provide a flexible and practical solution. Features include an expedient 4-wide-2-high stacking truck pack combined with super-fast deployment onstage.

The regional dates were primarily at academy venues, culminating in a high profile high pressure performance at London's Roundhouse.

The look and design developed for the tour was a total change from any previous Wilkinson live shows, and a big part of the aesthetic goal was to produce something new and exciting.

The floor package was based around six trussing towers - made up of the new pre-rigged truss. All the fixtures and cable looms staying in the trussing for transportation, and once unloaded from the truck the truss towers are moved swiftly into place using removable wheelbases which detach once they are in place on the custom X-base floor stands which provide excellent vertical stability.

The show concept was initiated after discussions with Mark Wilkinson himself and his management team during which Mark expressed a strong desire for no video elements – wanting to keep the focus firmly on the music. However as an interesting twist, he indicated he did want a video “vibe” to the stage! 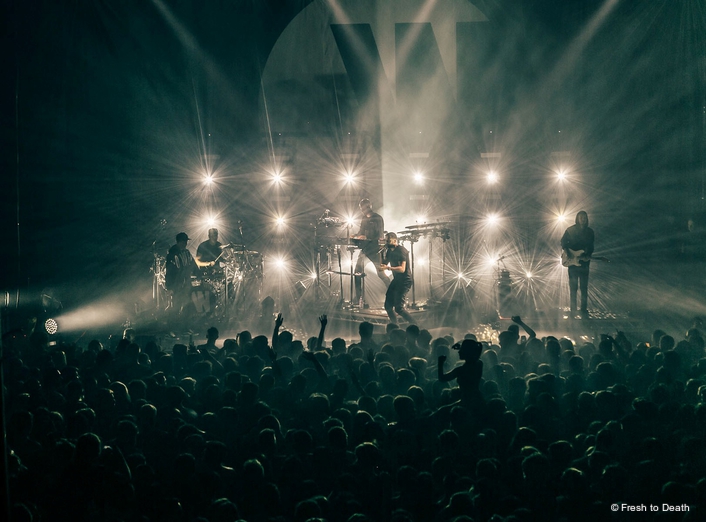 With this challenge in mind, Sam produced a strobe-tastic design using the adaptability and mapping and zoning capabilities of some of the newest LED strobes on the market sculpted into a pixelesque environment that met this brief.

Colour Sound supplied 28 strobes which were at the core of the touring floor package comprising 18 Philips Nitros and ten Claypaky Stormies. These were boosted with another 16 Stormies for the Roundhouse, and with 44 in total at that gig, there was some serious potential for shaping the show! 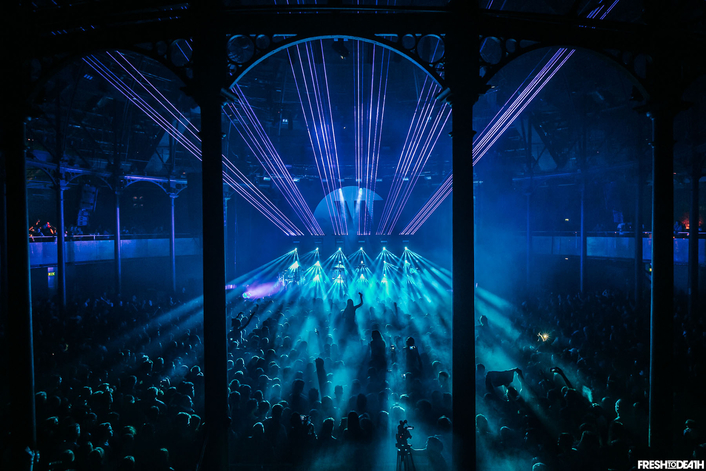 Inside each tower were three Robe Pointe multi-purpose moving lights, three Nitros and a laser array fixture together with a Stormy.

The towers proved a neat and extremely efficient way to install a great looking lighting rig that could be set up and fired up within an hour of being wheeled out of the truck!

Robe LEDWash 300s on the band risers provided mid-stage fill light and three LEDWash 600s were positioned down both sides of the stage for cross lighting for the singers and front line. Another two Stormy LED strobes each side of the LEDWash 600s kicked  strobe light and pulses in from that punchy low-level angle. A WholeHog 4 console was used to run the lights with a RoadHog for backup. 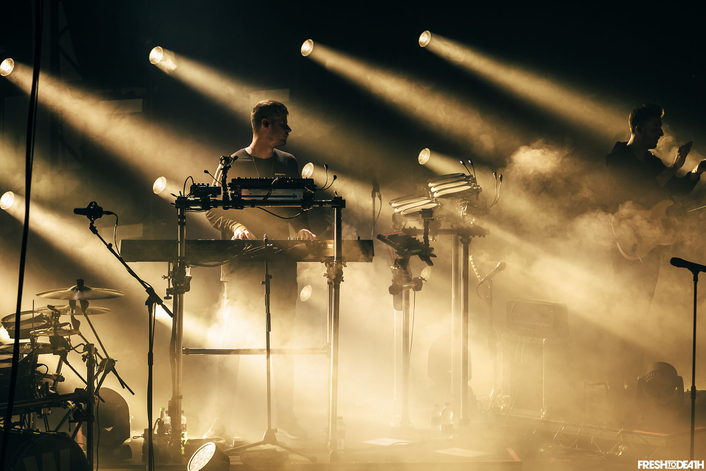 The biggest challenge creatively was building the wide variety of looks needed to keep pace with the huge dynamics of the set which dipped into its pumping d'n'b roots and travelled to some of the more mellow but equally intricate sounds of the new album.

Everyone was delighted with the results. Dealing with Colour Sound was a “Fantastic” experience confirms Sam, who was joined on the tour by crew members Alex Ryan and Steve Wilkinson, plus David Cattermole as an extra technician for the Roundhouse show.

A touring monitor and stage system was supplied by Patchwork London, based just north of the capital. Calum Mordue and Steve White both work full time for Patchwork and are Wilkinson’s monitor engineer and tour manager respectively for all live shows. FOH engineer and musical director is Pete Thomas. 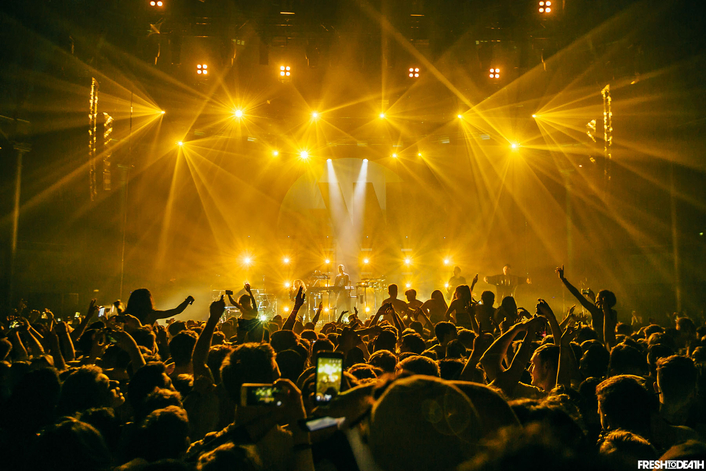 The monitor rig for the Hypnotic tour comprised of a full mic package and line system which fed into a Midas PRO2C console with DL251 stage rack. Twelve sets of Sennheiser G3 IEMs were used for the performers, which were augmented at the recent Roundhouse show with a combination of L-Acoustics SB28s and d&b C7 stage subs. No floor wedges are needed.

A series of shout mics are used for both performers and crew to communicate during the show. Calum uses the inbuilt matrix mixer for this solo, so he hears all the shout mics whatever mix he is listening to.

Patchwork also provided a CJ2000 / DJM setup for the support DJ who opened on the tour.

RF coordination can be a challenge for this show as, in addition to the 12 sets of IEMS, five channels of G3 500 945 hand held mics are used. An RF explorer and Vantage are used to scan the venue, together with an intermodulation spreadsheet to calculate where to plot the frequencies. 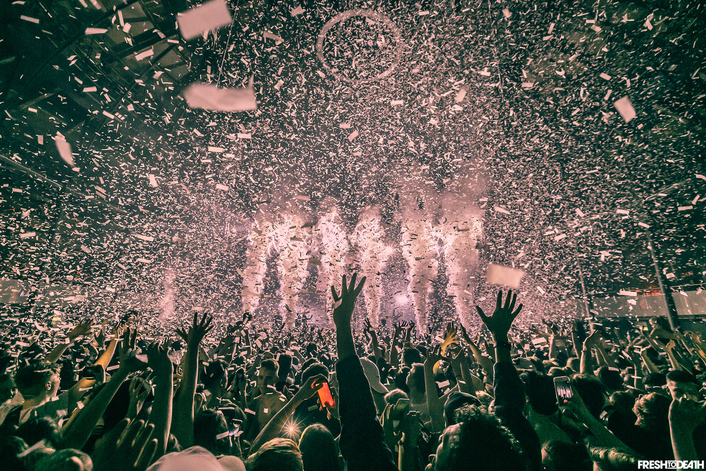 At FOH, Pete requests an Avid Profile/SC48 or Soundcraft Vi series but doesn’t currently carry a console on the road, instead he utilises the house PA. At the Roundhouse he used the new SSL Live L500 Plus console.

The installed PA there is a Britannia Row L-Acoustics K2 system, comprising 8 x K2 elements a side with four K1 subs hung directly behind, 12 x SB28 subs ground-stacked with five ARCS Wides a side on top. The front fills are Kara, with flown Karas and SB18s for balcony fills and two 112Ps for the VIP areas.

All members of the Wilkinson team enjoy a cool family vibe on tour – most of the people involved have worked together for some time, so it’s a smooth, slick and friendly operation.

Commenting on working with Colour Sound, Calum says, “Alex is one of the best project managers we’ve ever worked with – he’s absolutely meticulous in his planning and execution, which really pays off when we are on the road”.