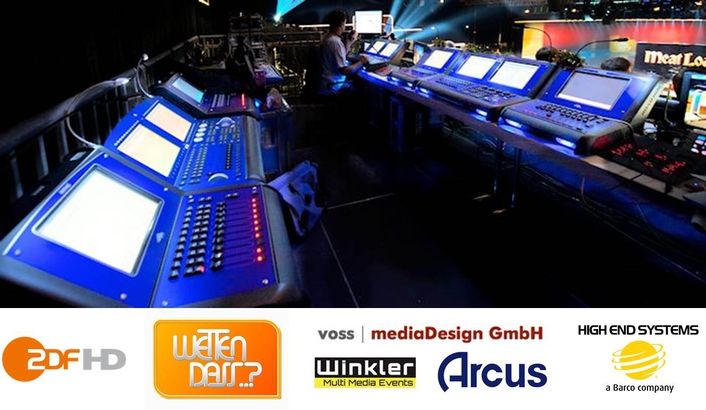 The show travels to different European cities setting up in a variety of venues from open air theaters to outdoor theme parks
Production Designer Manfred Voss, prefers not to play games when it comes to his lighting and control. He plays a winning hand by using High End Systems, a Barco company, products. For 20 years, Voss has been with the popular German TV game show, “Wetten, dass..?” (which translates as “Wanna bet that...?”)  counts on ordinary people performing outlandish tasks for its entertainment value.

The show travels to different European cities setting up in a variety of venues from open air amphitheaters to outdoor theme parks for live broadcasts. Celebrity guests, including musical groups, participate in the action, placing their bets on contestants who compete in crazy tasks such as: climbing a tower using toilet paper; flipping coins with a forklift; removing pins from mousetraps using one’s tongue, and the list goes on. It shares a similarity with the US show, “Minute to Win It.”

Voss used the Wholehog 3 for control for almost 10 years before switching to the Road Hog Full Boar last year “for its performance and reliability,” he says. “Very useful for me is the intuitive operation of the Effect Engine, which helps me to finish my tasks within the shortest time,” he notes.

The Road Hog Full Boar helps him with the constant set changes, he says. “For every show we make a new lighting plot for the floor lamps, which could be 100 units or more. Lamps in the rig will not change. The Full Boar is so simple and fast to patch, that we make a new patch for these lamps for every show.”

Voss also helped create the set design and the specialized lighting looks for the melding of dancers, contestants and performers to give the show its distinct look. For every show Voss uses a mix of SHOWGUNs and SHOWPIX because of the different musical sections of each show, he says.

He started using the two fixture types in the show in 2008. “Normally I use the SHOWPIX in a cluster of 4, 9 or 16 units. With that you will get a big punch of light without the classical beam of a normal moving light. It’s really crazy.”  He likes the stock graphic images in the LED display luminaire. “The graphics inside the SHOWPIX’s library give me a huge selection of good effects.”

As for the SHOWGUNs, he says, “The SHOWGUNs are good in combining the LED ring with the huge beam of the lamp.”

While some TV LDs may try to dim down the intense light fixtures for the cameras, Voss takes delight in going the other way. “Leveling the SHOWGUNs and SHOWPIX during the live broadcast is really hard because of the immense light output of theses units. I do that only by eying it, looking to all my monitors, but I always try to take the intensity up to the maximum possible level  - and over, if it looks nice!”

In addition to his work as lighting and set designer, since 2001 with his production company "Voss Media Design," Voss is also the supplier of the moving light equipment for the TV company and responsible for delivering and handling all the moving lights, video equipment and controls to the show. He designs other TV shows as well.