The German TV Awards 2011 at the MMC-Coloneum

The RTL TV movie "Hindenburg", which to a large extent had been shot at the MMC studios, received the Award for Best Mini-Series
On October 2nd, 2011, 1,200 invited guests celebrated the 13th German TV Awards in Cologne. Magic Media Company (MMC) was responsible for the technical implementation of the gala show and for the set construction at the studio. In addition, MMC provided the design and the construction of the after-show area at the Coloneum Mall, as well as the technical services for the party.

On the day of the awards gala, the independent jury of nine, chaired by Christiane Ruff and Christoph Keese, selected the final winners. A total of 18 categories were awarded this much-coveted prize.

Nazan Eckes and Marco Schreyl, assisted by renowned presenters, led the glamorous, entertaining, and emotional gala evening, which culminated in the final award of the honorary prize to Joachim "Blacky" Fuchsberger (85), who was awarded for his lifetime achievement. 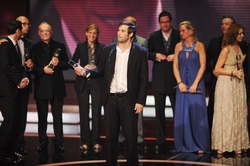 One of the winners of the evening was the RTL two-part TV movie Hindenburg, which to a large extent had been shot at the MMC studios in Cologne. Hindenburg received the German TV Award in the category of Best Mini-Series. The lavish historical TV movie by director Philipp Kadelbach, with Maximilian Simonischek playing the lead, won the prize ahead of Go West - Freiheit um jeden Preis and Der kalte Himmel (an ARD production). The jury was particularly impressed by the scenery and the special effects by Benedikt Herforth and Denis Behnke. For this spectacular production, the MMC Art Department built many parts of the airship Hindenburg on a gigantic scale. (Also read the news report The Hindenburg Takes Off)

Please find all of the winners at www.deutscherfernsehpreis.de

The gala was broadcast on Monday, October 3rd, 2011, at 08:15 p.m. by private channel RTL. The technically demanding show was recorded by MMC for production company - Werner Kimmig GmbH.

The camera signals were mixed on a GVG Kayenne (3,5 M/E) at MMC’s HD control room 11. In addition an EVS and a GVG Summit Server as well as seven XDCam HD recorders were used for playback and recording.

Communications and audio were also demanding. Twenty-two intercom stations, 125 radios, 20 wireless Neumann/Sennheiser SKM 5000 microphones, and 15 wireless in-ear monitoring systems had to be managed by the Riedel Artist communication matrix and the Lawo mc2 82-audio mixer at the control room.

The set at MMC studio 30/31 was built by MMC’s Art Department based on a design by Jurgen Hassler. In addition this department was responsible for the design and construction of the after show area with the integrated disco area in studio 33 at the Coloneum Mall.

MMC also carried out the post-production and used its proven tapeless workflow for this purpose. Five channels from the HD control room 11 were recorded and made available by the GVG Summit Server. During the recording, the program signals and the clean feed were saved on an Avid media composer Nitris DX. Thereby the whole post-production process was accelerated once again, so that the show could be broadcast after only 20 hours.