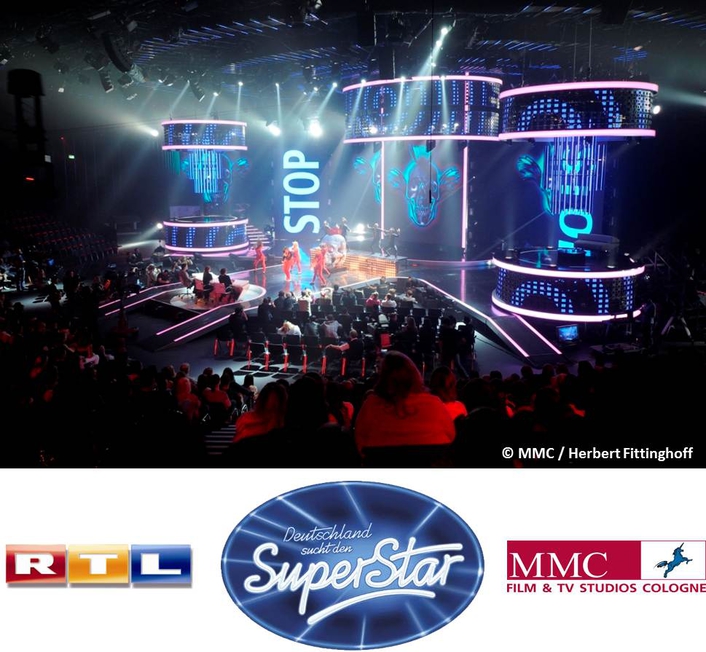 17-year old Luca Haenni from Switzerland beat Daniele Negroni (16 years old) from Regensburg with 52.85 percent of all audience votes at the grand finale held at the Coloneum in Cologne, in MMC’s studio 30/31. Thus he won a record contract with Universal Music and 500,000 Euro.

Successful 9th Season An average of 5.11 million viewers watched the 24 episodes of the 9th season (market share of 16.4%). In the young viewer’s category, the show’s average rating was a very good 25.7 % market share (3.02 million).The 10th season of DSDS is already being planned: Starting immediately, singers from Germany, Austria, and Switzerland can apply at www.RTL.de.

The Production
The Finale of "Deutschland sucht den Superstar" and the other nine DSDS episodes were broadcast live from MMC’s studio 30/31 on behalf of Grundy Light Entertainment.

A total of 13 cameras were used for the HD-production, which was directed by Volker Weicker. These included five Grass Valley (GVG) LDK 8000 cameras (equipped with Canon EFP 27x to 72x lenses) on Vinten Quattro pedestals, two GVG LDK 8000 handheld cameras with an Abacus Stadium Lens or an 11x lens for a total view, one LDK 8000 elite wireless Steadicam with a Canon ENG 14x lense, one Spidercam and two Sportscam. 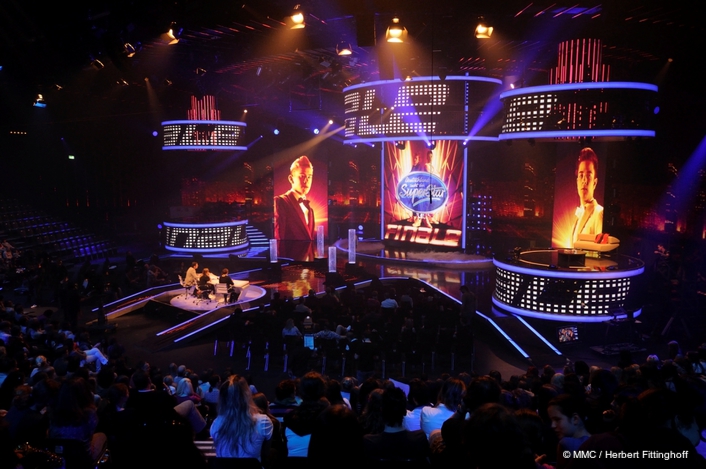 The playbacks were carried out via four channels on a GVG Summit Server. For the highlight editing and the slo-mo playbacks, two EVS XT2 were used. For the recording, eight Sony XCam VTRs were available. The editing for the re-broadcast was done at MMC’s Editing Suite no. 5 on an Avid Mediacomposer Nitris DX.

The DSDS Stage, Lighting, and Media Technology
MMC’s Art Department built the complex stage in MMC’s studio 30/31, based on a design by Wieder Design.

As in previous years, Manuel da Costa was responsible for the lighting design of the 9th season of DSDS. The close coordination with the producer, Grundy Light Entertainment, and with the channel RTL produced spectacular opening shows with razor-sharp laser beams and enormous storms of light, along with sensitive and unobtrusive settings for the individual performances.

As in previous seasons, Cologne’s company Magic Light + Sound GmbH supplied the lighting equipment.  The complete product range, such as floodlights of the manufacturer Robe, as well as Clay Paky Alpha-Beams, Nova Flowers, and GLP Impression XL, was used. Because the lighting service provider is located nearby, short-notice special requests for staging could always be accommodated. Lighting, video, and decorative elements could therefore be integrated to an extent, seen in very few shows.

At every live show, there were performances with specially designed constructions. These had to be set up and then taken down within a few minutes, in order to make the broadcast flow possible.

MMC’s rapid construction ability was essential in creating the precisely fitting parts needed to support the staging and its media elements in time to meet the show’s very tight deadlines.

Because MMC’s Art Department and MMC’s studio 30/31 are very near to each other, changes could be made almost up to the beginning of the live broadcast.

The result is remarkable and well worth seeing. It proves that the quality and quantity of DSDS’s media technology is and will remain the benchmark in German television!

Last year’s already impressive Barco MiTrix backdrop was extended to the sides. The connecting MiStrips were also increased in number and modified to be movable by motors during the show.

More O-Lite panels were added to the two side towers, so that these elements covered all sides of the towers, allowing them to be seen in camera shots facing the audience. As in the previous season, the central iLite wall, the two O-Lite walls, and the MiStrip pixel strips in the floor and ceiling were included. Altogether more than 12 tons of media technology was used, a record figure!

PA System
The biggest innovations in 2012 are in the PA system. As in the previous years, Nico Roden, MMC’s Project Manager for Lighting, Media Technology & Sound, developed the concept.

This year, MMC’s new acquisition, AD-System’s Touring Line Compact, was implemented as the main PA system. Each element is equipped with two 6.5" bass/mid-range chassis and a 1.4" compression driver. 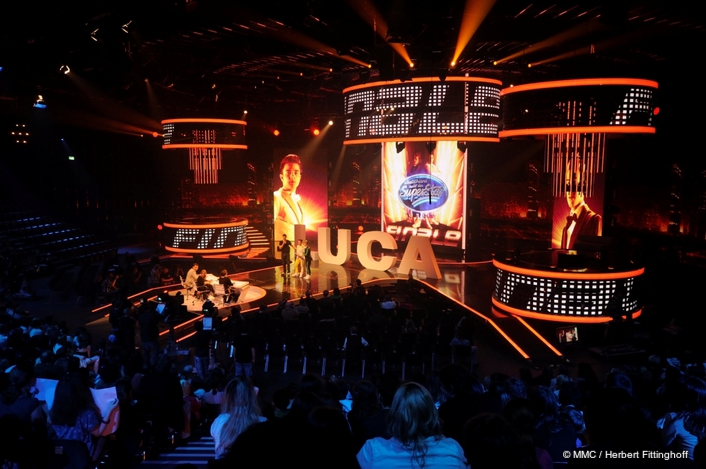 For the main stand, a total of 24 Touring Line Compact elements were used, along with decentralized systems from Meyer Sound. For best voice comprehension in the inner areas, AD-System’s Magnus 12, as well as some Meyer Sound MM4s were used. The really low-range basses, which provide "a kick in the pit of the stomach", were supplied by 2 x 8 AD-System’s tour subs and were placed in cardioid configuration.

The FOH was equipped with a Soundcraft Vi4 including a built-in RockNet card acquired by MMC during the past year. For the vocals and the overall sound an Avalon VT 737 and a VT 747 were used. Apart from that, external peripheral systems were not used. Processing and signal distribution were handled by one Meyer Sound DME 64 and three BSS Soundwebs. The complete signal routing in MMC’s studio 30/31 was done via Riedel Rocknet. Recently, the MMC greatly expanded its RockNet stock, so that weighty copper cables are more and more a thing of the past.

The monitor mix relied on the proven Yamaha PM1D integrated into the RockNet network.

The brand-new Fischer Amps FA-03 E universal in-ear headphones were used for the first time this year. Even candidates, who already had their own headphones, were convinced by the in-ear monitoring and enjoyed the excellent sound quality.

The entire FOH was secured by an uninterruptible power supply, as is usual for live entertainment shows of this size. For the event of a crash, a Yamaha LS9 was provided. However, it has never been used in more than 80 live shows.