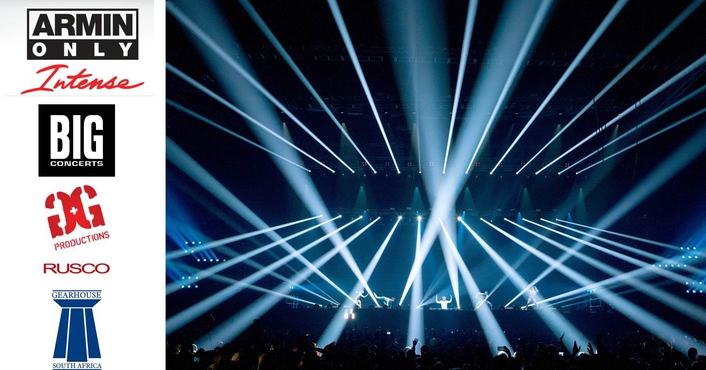 World famous DJ, Armin van Buuren is known for creating visually extravagant events and this one blew the lid off all expectations. Technical suppliers, Gearhouse SA, Sets, Drapes, Screens, LEDVision and Splitbeam – all members of  the Gearhouse Group – provided the technical production for the event including Structures, Set, Lighting, Audio, Power, Rigging and a considerable amount of LED on which the creative AV elements played out. The video content was created by creative video-design, production and operating agency, Eyesupply - the inspired result of months of collaborative work with the artist.

A total of 460 DuoLED 18” panels were configured into a giant, 21 metre wide screen backdrop, LED accents on the side stages and front stage cladding. The generous spread of LED allowed for an overall visual overload across all surfaces, making the most of the more than 4 hours of creative video content.  Centre of the LED screen, a camouflaged and motorised artist entrance allowed the artists to move through the backdrop itself.

The main stage area was constructed on two levels, with Armin commanding the lower level and much of the additional entertainment taking place on the upper level, which even sported trampolines for the acrobatic displays. Two mini stages flanked the main stage and these, together with a third positioned at Front of House provided plenty of scope for flexibility and variety.  Percussion was situated on one stage, another carried a baby grand piano and singers and on the third, Armin delighted the crowd by playing a 1 hour old-school vinyl after-set in the middle of the audience. 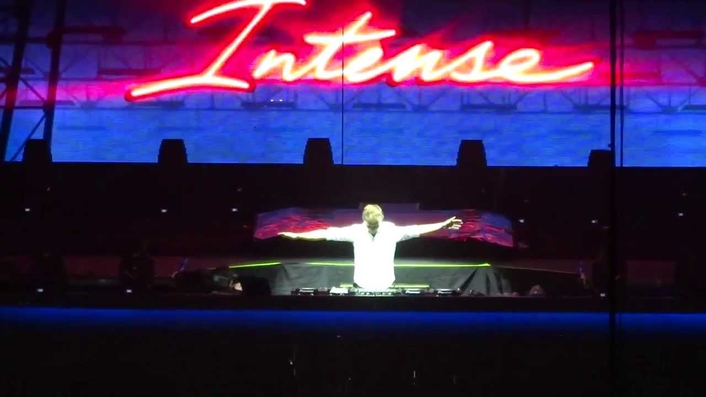 Each satellite stage was equipped with their own small lighting rig. Overall, a whopping 668 lighting fixtures were deployed across the production to great effect in striking beamy looks and atmospheric states. The majority of the rig was moving lights (Robe Pointes, Clay Paky Sharpies, Martin Mac Vipers and Varilite 3000/3500 fixtures) but the technical rider also required every Atomic Strobe available in South Africa.  For Gearhouse’s Stuart Andrews the extraordinary visual aspects were what made the show stand out for him. “It was not so much the amount of lighting used but what the Intense Lighting Designer (Marc Heinz) and Operator (Michael Seeverens) did with the equipment – with over 5000 invididual pre programmed lighting cues, it looked sensational. The Lighting and AV segments really made this event special.” A 6 fingered raked truss ceiling over the main stage area was used for stage lighting and either side a suspended “light bank” of Martin Mac 101 fixtures provided additional eye candy. 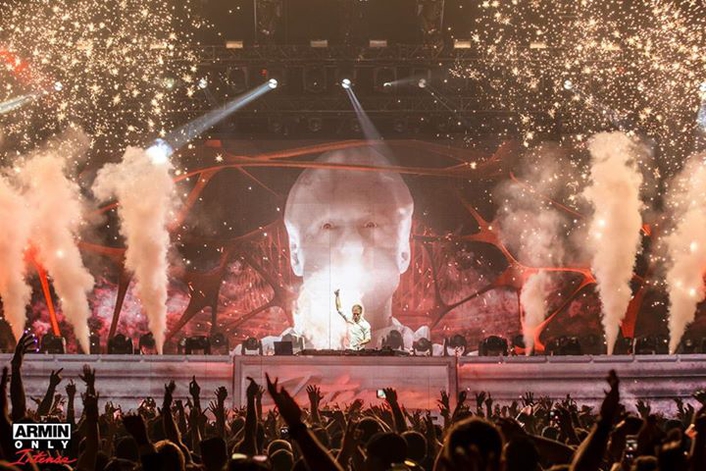 Gearhouse’ Audio Operations Manager Jako De Wit says this is the largest Audio set up the company has done in this venue to date. “For electronic dance music it had to be clear and punchy. The rider specification was considerable and I am pleased to say that we were able to meet it 100%.” Main stacks were comprised of 14 K1 with 9 Kudo a side providing out fills whilst 48 SB 28 subs and 12 Kudo took care of front fill. 6 KARA were used for additional fill and 4 delay hangs of 6 V-Dosc per hang catered for those further back.

Rigging-wise, the production required some 152 ring points, necessitating the installation of a mother grid to distribute around 38 tons of weight across a relatively small area. “We had 9 riggers working in the roof simultaneously for the first time to achieve the installation in what was a relatively short get in,” explains  Rigging Head Kendall Dixon “ but it went in relatively smoothly, thanks to a great team and in particular our promising up and coming rigger, Sam Simelane.”

The Event was project managed for Gearhouse by Anthony Banks with the assistance of Trevor Mojela and a technical team of more than 48 personnel.