Frank Turner’s Be More Kind on Tour with Adlib 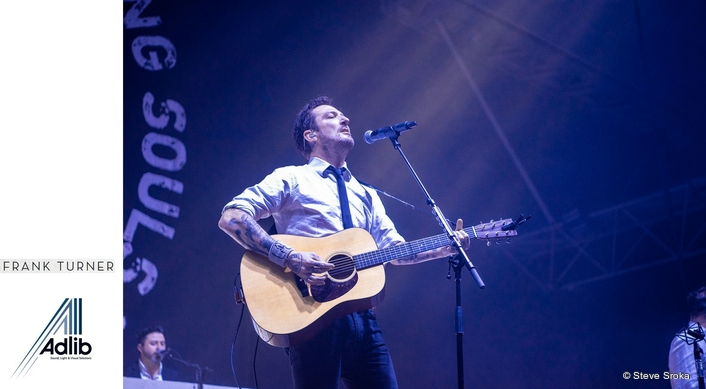 Video
Taking on the full production designer role was an exciting prospect for Ali Pike who initially chatted with Frank about what he wanted video-wise, and had a very clear overall perspective of what she wanted to create. The focus was to bring something fresh and different to the visual mix.

She wanted some elements of the video to be interchangeable with more classical, projected lighting effects – like gobos – an idea she hit on after a gig last year at Red Rocks where they projected onto the rock formations.

Frank and the band had some interesting hand-drawn animated videos which she thought would respond well to treatments and morph nicely into the live show. 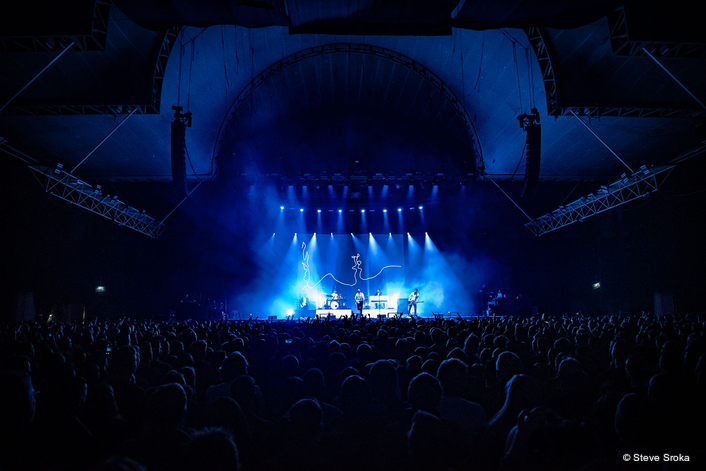 Frank has had black-and-white backdrops in the past, and the band all wear white shirts onstage – which take light beautifully – so these powerful monochrome elements were the starting point, and this striking aesthetic could be strategically contrasted with specific, more literal footage, such as an adapted version of the promo dancing video for “Little Changes”.

Assisting Ali to get all the kit and the effects she wanted on the road was Adlib’s Matt Hopwood.
The white backdrop for the lighting and video projections was 18 ft high, and Panasonic RZ21K laser projectors were selected for their power and relatively compact size. These were fitted with short throw lenses and run as an overlaid pair, flown on their own dedicated mid stage truss.

Adlib supplied a fully redundant Catalyst V5 Pro Media server that came complete with 6 channel Active Silicon Camera Inputs. The servers were operated via Ali’s grandMA2 lighting console, where she also added effects and treatments to the content that she had compiled for the show. 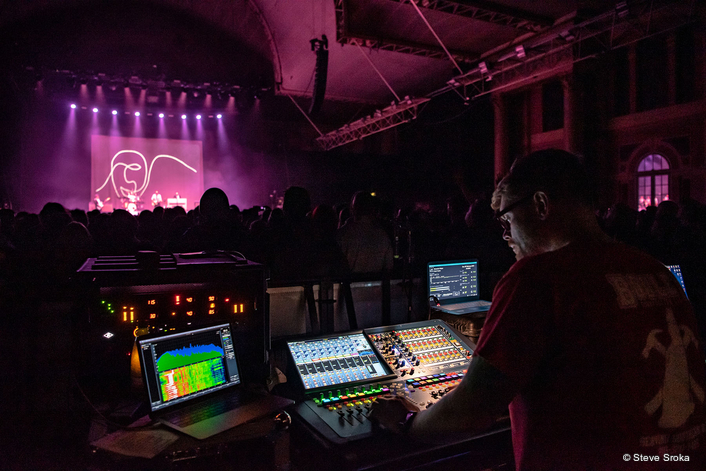 One of the lipstick cameras was attached to a mic stand looking up at Frank catching his guitar as well. The fish eye was used for a rear shot and was clamped to the underneath of an ego step in between the keys and drum risers.
The CV 350s were attached to mic stands and positioned to capture head shots of the keyboard player and the drummer.

Once Ali had fine-tuned all these camera angles and placements, Matt set markers on the camera preview rack so he could get the position correct for each show (all the onstage cameras had to be struck for the opening act, Jimmy Eat World, and then re-positioned). 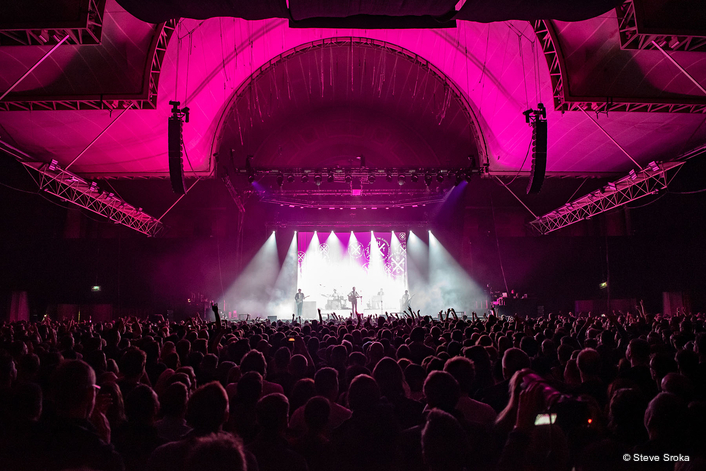 The last two lipstick cameras were fixed onto two of Adlib’s MAC Aura moving lights with custom GoPro mounts and used as improvised robo-cams! Positioned far downstage left and right, they captured some exact shots that Ali wanted – as she had control of the movement via the lighting desk.

The Aura cameras could skim the bassist and guitarist, fire back up at the screen and also pan out into the audience, so they were super-versatile! With the combination of the light sources so close to the camera lenses and in the same direction, Ali was able to get some very unique and dynamic live shots to enhance the desired look and ambience.

Controlling camera inputs through a Catalyst system was new to her and something that she and Adlib’s Rich Rowley discussed extensively ahead of the tour, as it was vital to be able to execute camera cues just as if they were lighting cues. 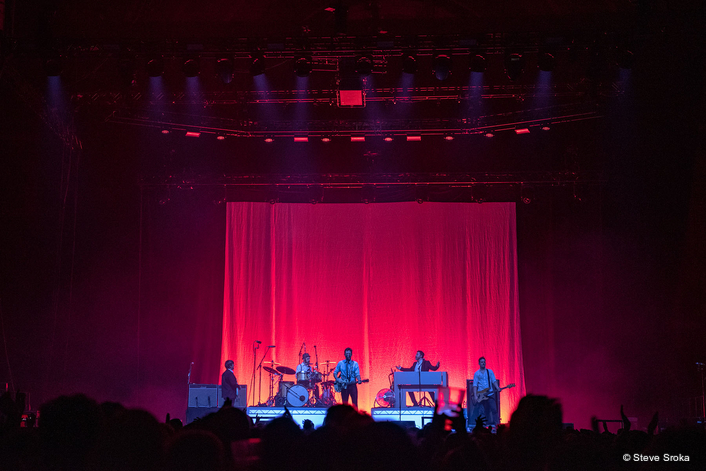 “Rich, Matt and the whole Adlib team were really helpful and creative in finding clamping, mounting and control solutions so I could run the cameras exactly as needed” commented Ali.

She emphasises the fact that video is just one element of a bigger picture and a key goal was to ensure that “it balances nicely with everything else”… and that’s for hitting the right dramatic notes for everyone watching live.

Audio
James Coghlan was the systems tech, working with Adlib’s Alan Harrison to ensure that band engineers Luke Buckbee (FOH) and Johnny Stephenson (monitors) had everything they needed.

James had completed a short run with the band earlier in 2018 where Adlib supplied a CODA AiRAY system for some club and academy shows which didn’t have access to a house PA. Luke was so impressed with the CODA that he chose it again for this arena tour and requested James back as systems engineer.

The system comprised of AiRAY and ViRAY supplemented with flown S2-F low frequency extensions along with a broadside array of eight stacks of CODA SCP-F subs on the floor for even sub coverage.
Three CODA APS speakers per side were used as infills, with four HOPS8’s for front fills. 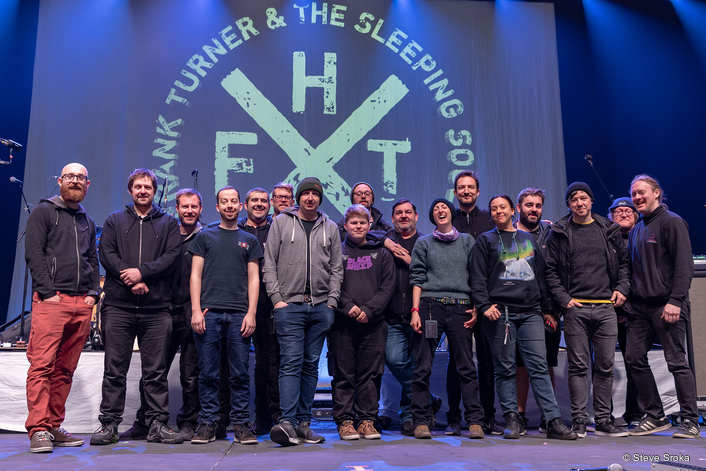 CODA was spec’d for its small and compact box size, extremely light weight and excellent sound, which was perfect for the smaller theatres and rooms they played in 2018 where both points, weight loadings and truck space were limited commodities.
Having had such an all-round awesome experience with the system on this, Luke was happy to take it out on this arena run of gigs.

The standard set up was 12 x AiRAY and four ViRAY down-fills for the main hangs plus 8 AiRAY and four ViRAY for side hangs with six SC2-Fs a side flown behind the main arrays.
The AiRAY was toured with the 90-degree AiCOUPLER (waveguide) and the ViRAY with the 120-degree ViCOUPLER waveguides. James positioned the ViRAY beneath the main hangs as down-fill for its increased horizontal dispersion to help cover the front rows.

In the London gig at Alexandra Palace, a long narrow box of a room, they dispensed with the side hangs and instead used the ViRAY in small ground stacks to fill the sides, then flew the AiRAY as two delay hangs
They used an Adlib fibre control system, with Dante as the main protocol between FOH and stage, and the fibre network also carrying signal to control the amps.

An Outline Newton was utilised as the master console matrix which took in analogue and AES from Luke’s PRO2C FOH console and the DiGiCo SD12 desk doing the support mix. The outputs from the Newton then fed a Lake control system, which fed the amps with both LiNET and an analogue backup.

They toured 12 x Linus14 amps and 25 x Linus10s in total, all connected to a Mac Mini at FOH, running Linus Live to control the amplifiers.
With Frank’s hectic live show schedule, the band provided their own consoles – the PRO2C for FOH and a DiGiCo SD9 for monitors… and also had their own IEM monitor system which leaves the stage nice and clear, so Adlib’s role was suppling the racks-and-stacks, control, the crew and their technical and creative fine-tuning skills.

Opening act Jimmy Eat World were totally self-contained audio-wise.
From an audio POV, the tour was very straightforward.
James, Alan and Matt made a great Adlib team and they enjoyed the family atmosphere and camaraderie on the road working with a “great production crew’ who included production manager Dougie Murphy and stage manager Phil Murphy.

“I knew that any small question I might have would have already been considered and sorted… and that attention to detail and thoroughness made everything exceptionally smooth” concluded James.