Florence and the Machine Have the Love for Sennheiser 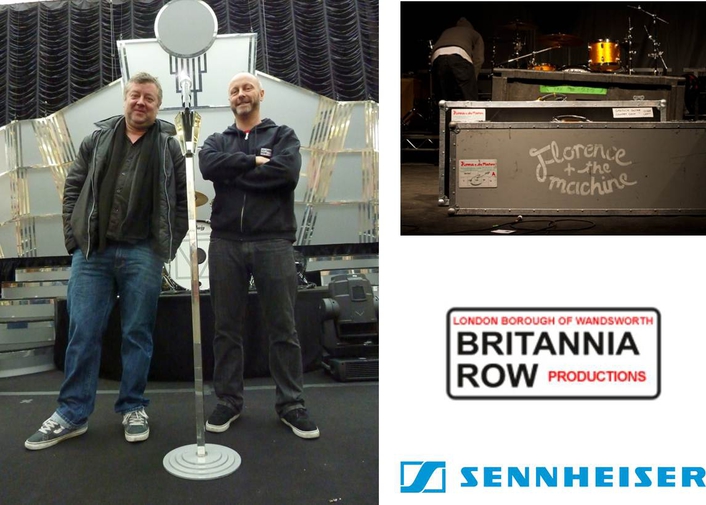 .
As monitor engineer Phil McDaniel glanced out from his side of stage position at the end of one of the shows on Florence and the Machine’s current tour, he saw every single member of the audience with their hands in the air and he knew, beyond doubt, that everyone in the room was having a good time. This is, of course, redolent of the effect of Florence and her incredible vocal talent. It is also testament to the skill of her crew and their choice of audio equipment, a significant part of which comprises Sennheiser microphones and in-ear monitors.

The system is supplied by audio rental company Britannia Row, Florence herself uses a customised SKM 5200 with MD 5235 head, with musicians and backing vocalists making use of 2000 Series in-ear monitoring.

“When I inherited the show, we were still doing clubs and Florence was using a wired Neumann KMS 105,” says Ian Laughton, Front of House engineer. “When we got bigger, we went for an SKM 5200 with a KK 105 capsule, but then we realised there was too much spill going down the 105.”

Laughton still asserts that the 105 is the ideal microphone for Florence, because of its rich bottom end and perfect top. “But we’ve got a heavy Tom-Tom orientated drummer,” he smiles. “In fact, it’s a very drum orientated band – there’s even a song called The Drum Song - and there are two drum kits. Because of that, everything went down the 105 and there was no clarity.

“That was when we went to Mark Saunders at Sennheiser. He suggested changing to the MD 5235 capsule and it works really well. I don’t think there’s any spill at all and I’m really cranking the gear up. We have lots of pre amps and Avalon 737SP / Massenburg 8900 / BSS 901 MKII going on, 20dB more then any other singer because she whispers some songs.

“There’s also a prominent point in Florence’s vocal range and a lot of other mics have a lift at that particular place. The 5235 hasn’t. It’s quite smooth and still has a bit of weight in the bottom end, which I’m really happy with. I also wouldn’t leave home without those beautiful 904s. We used to swap between them just to get a bit of difference, but they are actually the best mic I have ever come across, they are absolutely fantastic.”

“Because of the scale of the show, we’ve got a lot of extra inputs, so I had to move to a bigger mixing console – we’re now using what’s known as the ‘Genesis’ desk, the first large format digital console, and the console that Brit Row used with Genesis when they were still touring,” adds Phil. “In the past I always tried to squeeze the most out of a small package, but now that we’ve upped the desk spec I can properly hear the difference in the 2000 series IEM’s from the G2, which we were using originally, to the G3.”

Phil is, he says, the happiest he has been in terms of microphones and IEMs.

“We’ve got top of the range as far as Sennheiser is concerned,” he asserts. “We’ve gone through five months of promo, with some big TV work and high profile American shows included, and we can accommodate the core band with a 12 pack of Sennheiser IEMs and a couple of radio mics. It makes getting in and out of venues really easy and works exceptionally well. I’ve never seen the band happier. They have big smiles on their faces when they come off stage and thank us all every night.

“Using the clip-ons also makes for a clean and tidy stage and the 904s just work across the board. We could go all esoteric, but this is a nice little package of Sennheiser kit and it sounds amazing. And that is what it’s all about.”