Working with a group that has seven band members, a compact board with plenty of inputs and outputs made the Vi1 an option
Celtic punk band Flogging Molly is currently touring the world with HARMAN’s Soundcraft Vi1 as its monitor console. For nearly 15 years, Flogging Molly has played its blend of traditional Irish sounds, hard-edged punk and thoughtful, socially conscious lyrics to millions across the globe.

The year 2011 saw the release of the band’s most important and ambitious album to date, Speed Of Darkness, which debuted in the Top 10 (#9 overall). The album was praised for its “call to arms” during these troubled economic times by such press outlets as The Wall Street Journal, Rolling Stone, Alternative Press, Associated Press, USA Today, Parade Magazine, Huffington Post and many more.

Flogging Molly’s tour manager Aaron Glas has been fond of Soundcraft boards from his experience working with the Vi4 and Vi6 at several venues including the famous Boston, Massachusetts House of Blues. “Once I got comfortable with the Soundcraft consoles, it was noticeable how easy they are to use and how good they sound,” he said. “When I found out they made a smaller and more affordable board using the same Vi series architecture including the Vistonics™, I had to have it for our live show. The Vi1 is very compact which makes it the perfect size for our traveling production.  It's always nice on the road to have consistent, great sound when going in and out of many different types of venues; we knew we'd have a console to rely on that wouldn't fail."

Glas even mentioned, “Venues like the House of Blues which have a good variety of HARMAN equipment always sound awesome. HARMAN makes everything easy, and on nights like that, everything works toward a killer show with amazing sound.” 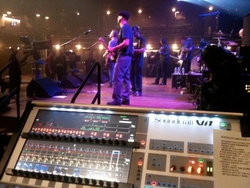 When working with a group that has seven band members, a compact board with plenty of inputs and outputs made the Vi1 an attractive option. “I really didn’t want to have to get a bigger board, and the Vi1 gave me everything I needed and more with enough outputs to do a number of wedges and in-ear mixes,” Glas said. "Other competing boards in the same range couldn't work for us, since we needed a very compact console with lots of inputs and at least 24 outputs to mix our show"

Chris McCleary, Monitor Engineer, added, “Mixing such a fast-paced show, the Vi1's intuitive layout allows me to make the fast mix adjustments demanded by such a vast musical diversity on stage."

For Glas and many others who have relationships with HARMAN and Soundcraft, the support has been excellent. “After developing a relationship with HARMAN, they made it even easier to travel with Soundcraft by helping us source a Vi1 in Europe,” he said. “We brought our show files over and are even able to record using the MADI card in a convenient, efficient way. Everything about the board and the support we’ve received is excellent. I can’t think of a better fit for what we need.”

McCleary summed up, "The ease of use, warmth and clarity gained from using the Vi1 far exceeds that of any competing model.”