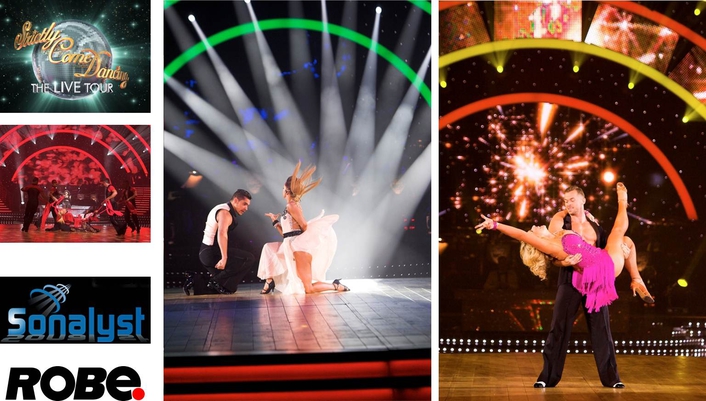 Lighting was designed by Richard G Jones, who was asked on-board by Show Director (and Judge) Craig Revel Horwood last year. The two have worked together on several musicals, and Revel Horwood’s brief to Richard was : “Three words dah-ling – Theatrical, Theatrical and THE-A-TRI-CAL!!!”.

Jones ensured that no-one was disappointed, creating a show awash with colour, movement, drama and pizzazz to match all the dancefloor action, energy and high jinks!

All lighting, sound & rigging equipment was supplied by south Wales based rental and production company, Sonalyst.

The 14 x MMX WashBeams together with 23 x Robe ROBIN MMX Spots are newly purchased by Sonalyst for their hire stock – which now contains getting on for 300 moving lights.

All the MMX units were rigged on the two arched trusses over the stage that followed the line of the two curved LED video borders and on a straight truss directly upstage of the judge’s desk.

These were used for way-cool aerial effects and producing eye-candy out over the dancefloor as well as looking fabulous on the IMAG cameras dotted around the dancefloor.

The gobo wheel was fitted with Robe’s In-Air Kit, a set of gobos specially designed for producing stunning aerial effects. These gave “Fabulous, very punchy and incredibly bright images that hit the spot for this type of show” declares Jones.

The MMX WashBeams were primarily utilised for ‘dressing’ the band onstage, and illuminating the set areas, plus back-lighting the judges.

The fixtures were all fitted with the fresnel lens option, however, Jones mentions that they tried out the beam lenses in rehearsals, which “Blew us all away” with the brightness and speed … getting him thinking about how he can integrate these into next year’s lightshow.

Apart from being very impressed by the brightness of both the MMX Spots and WashBeams, and thinks the zoom on both fixtures is “fantastic”.

It enabled him to ‘spot down’ a wash unit so tightly that they could be used as high backlights on the singers during the show’s spectacular opening production number. “This was amazing” he enthuses, “Giving a very different look in the air”. 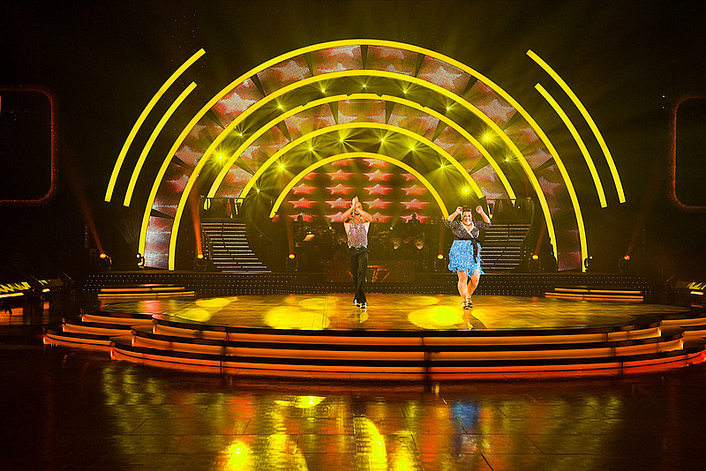 He loved the internal rotatable ‘barn door’ blades in the WashBeams. “Excellent” he says explaining that being able to rotate them 180 degrees was “Perfect for keeping the look and the air effects really tidy”.

The intensity of the MMX Spots combined with using the In-Air Kit gobos made them a “Great hard-working product for the show, ” he concludes.

Jones works with many different types of moving lights on the varied productions that he lights, and says he will have “No hesitation” in specifying Robe MMXs again.

From a rental company perspective, Sonalyst MD Rory Madden is also delighted with his new Robe investment, which is part of a programme to keep the latest technologies in stock.

“All the Robe units generally have proved themselves reliable time and again and it’s the case again with the MMX Spots and WashBeams which are really quality engineered and essentially ‘hand-made’ for the best results” he states, adding that the older lights have the bonus of retaining a great residual value. 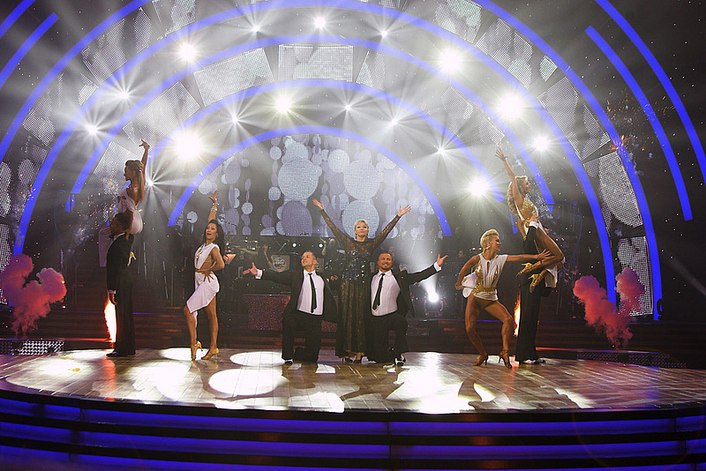 The strictly Live 2013 show was programmed by Alex Murphy and Chris Hirst onto a grandMA2 full size during a week of production rehearsals at the NIA Arena in Birmingham, and this was operated on the road by Mike Rothwell.