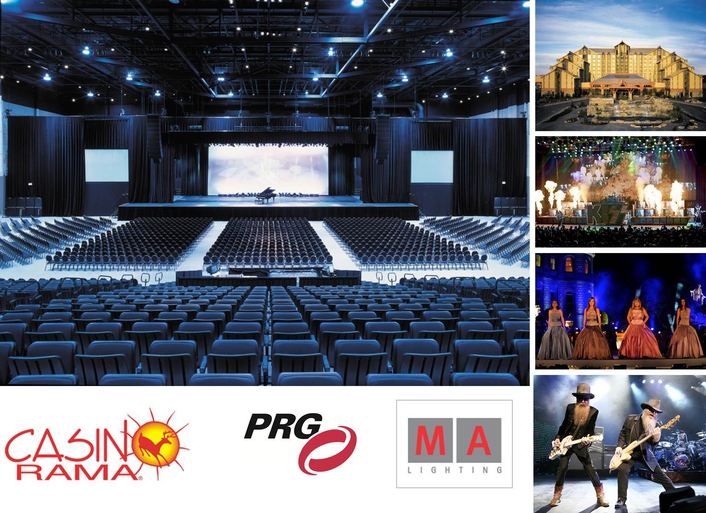 Casino Rama capped 2011 with dates for James Blunt, Russell Brand and KISS among others
grandMA2 has proved to be a good bet for Casino Rama, Ontario’s only First Nations commercial casino, which stages 150 shows a year featuring top names in music and comedy. First Nations is a term that collectively refers to various Aboriginal peoples in Canada who are neither Inuit nor Métis. Casino Rama invested in a grandMA2 full-size late last year, and it has quickly become their “console of choice,” reports lighting designer and programmer Derek Noble.

“Casino Rama purchased a grandMA2 full-size because of the size of the shows they attract,” says Andrew Beck, senior account executive with PRG Canada who sold the system.  “They have an extensive amount of equipment, including all their own lighting and rigs, and many acts request a grandMA. They’ve had a grandMA full-size for a while but in the interest of keeping their facility as cutting-edge as possible, they decided to purchase a grandMA2 and use their existing system as a backup. Now they have media server control and LED balancing capabilities.”

“Before we got the grandMA2 it was already an in demand item,” says Noble. “We had a number of touring shows that had brought the console in with them. We bought our own, not only because it’s the newest but also because it was the most in-demand gear. We need to ensure we offer clients the best so that they walk away happy.”

He notes that the casino’s inhouse lighting rig is used for 85 percent of the shows. “We have over 400 conventional fixtures and 200 moving lights and LEDs plus 112 motors. The grandMA2 gives me easier access to all the parameters. Its effects engine is also better than our old console, and it’s very easy to navigate.

“The grandMA2 gives us some flexibility in data management, too,” he adds. “We utilize it for data management for the MA NPU (Network Processing Unit) when other consoles are in use.  We have 16 active universes and the capability to expand to 64.  Although we only bought the console in December, we already love it!”

Another Canadian-based casino also upgraded its lighting control system when Caesars Windsor moved from a grandMA full-size to a new grandMA2 from PRG Canada, Beck reports.