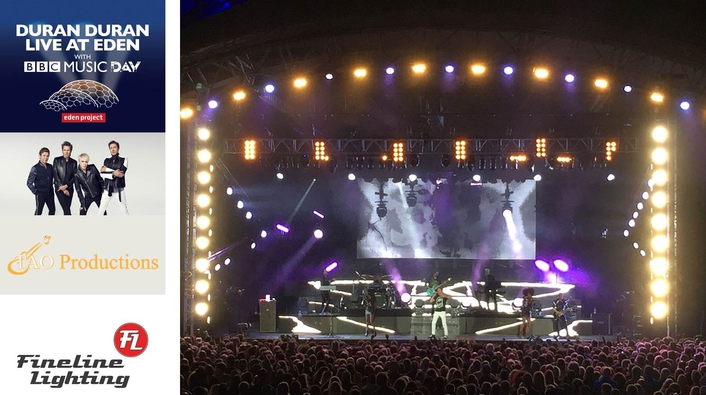 Bristol, UK based lighting and visuals rental company Fineline supplied lighting, video and rigging equipment plus crew to Duran Duran Live at Eden with BBC Music Day, staged at the Eden Project in Cornwall. The special concert was the finale of the BBC’s 2016 Music Day – a nationwide celebration designed to unite different generations and communities through music.

Fineline was working with TAO Productions … with whom they also regularly collaborate as a technical solutions provider for the annual ‘Eden Sessions’ concerts. The concert was broadcast live on BBC Radio 2, aired a few nights later on the BBC 2 TV channel and available via The Red Button interactive channel.

Lighting for the band – ascendant in the 1980s when they created their own highly stylish identity with a cool fusion of fashion, synthpop, risqué high quality music videos and some catchy innovative sounds - was designed by Vince Foster, one of the UK’s top LDs. He submitted a plot and a spec to Fineline who built the Eden production lighting rig based on this, with some fixture swaps related to their stock on consultation with Vince … explains Fineline’s Stu England, who project managed the event for them.

Eden has a permanent 18 metre wide stage and roof structure that is a hybrid flown / ground supported design and familiar to Fineline through their ‘Sessions’ work at the popular visitor attraction.

Four flown over-stage lighting trusses were added for the show plus another on the deck.

The fourth flown truss was right upstage and low slung under the video screen, utilised for eye candy fixtures.

Fineline provided an 8 by 4.5 metre surface of 6mm pitch LED at the back and the band were touring a custom curved floor-mounted video screen which sat in front of their risers.

Above these, on LX 3 the full height upstage truss, were 12 x Clay Paky K20s fitted with B-EYE lenses rigged on drop arms adding depth and height variation, joined by another 12 Magic Blades also on drop arms.

All these pixel-mappable fixtures combined and contrasted with the video to great effect. 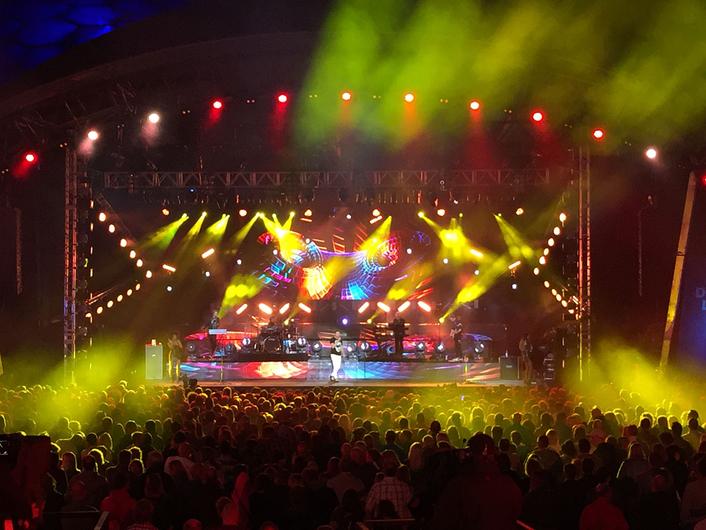 For key lighting on LX1 were six ETC Source Four profiles with 26 degree lenses and six 8-lite blinders on the front rail of the truss were perfect for blasting out into the audience.

The production lighting console was a Hog 4 – with a live backup unit supplied by Fineline running via DP8000 DMX processors.

Multiple networking was involved in the control set up, as there was also another Compulite console and a backup supplied by TV lighting operator David Bishop and overseen by BBC lighting designer Nigel Catmur, running a number of additional TV key lighting fixtures also supplied by Fineline, all amounting to a total of 23 x DMX universes. Duran Duran’s production also carried their Catalyst media server which ran playback video to the screens, triggered via their Hog 4 console.

Stu designed the data network, which is one of his specialist areas, together with co-ordinating the production lighting design and ensuring that the other acts playing also had good looking lighting.

The additional broadcast lights were 16 x Chauvet LED Slip PARs and 16 x 2-lites rigged off the front arch of the stage, alternating … which looked great over the audience.

Another 8 x 6-lamp PAR bars included four rigged vertically on the roof ground support legs and focussed directly acrossstage and out into the audience … which looked dramatic on camera.

They also added in two 12 metre upstage / downstage trusses each side of stage at the BBC’s request, each containing six LEDWash 600s for secondary washes.

The four FOH desks - controlling the production rig and all the TV extras - had to be merged. During the Duran Duran set, the BBC needed to control their TV lights and have access to the production lighting intensity control, so the four FOH consoles were merged over the network to allow this to happen. This was the biggest technical challenge of the gig elucidated Stu.

The Fineline team started the LX get in on the Tuesday for a Friday show. The BBC arrived on site the next day to start their programming, the band came on Thursday for a rehearsal and Vince Foster was on site to do his programming Thursday night, with it all ready-to-roll for the show – which was hugely well received - on Friday.

Fineline’s very efficient crew of four – including Stu - was chiefed by Tim Williams and joined by Will Dale looking after assorted FOH elements and technician Sam Kenyon.